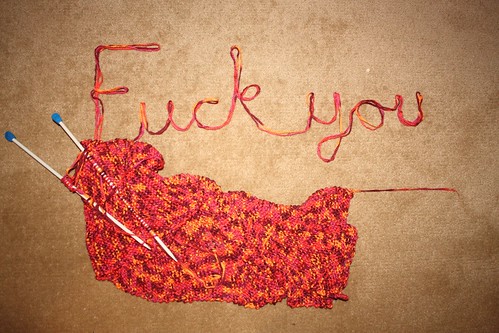 A few months ago, we flew back from Boston (and boy were our arms tired! No … seriously. My bag was kinda heavy). During the flight, I noticed the woman in the window seat across the aisle from us looking frantically for something after the crew had come to pick up trash. She was upset, picking things up and looking around. At this point, I hadn’t realized what she had lost, but she enlisted the crew in helping her, who starting going through piles and piles of trash, looking for her lost item.

A while later, she was knitting quietly when the flight attendant saw her and said, “Oh! You found your needle.”

The woman explained that yes, she had accidentally dropped it and she found it again. Not the flight crew.

“We went through a lot of trash looking for that,” the attendant said, sounding almost hurt.

“Oh yeah,” said the woman, dismissively, as she continued on with her knitting. “Thanks for that.”

Just so we’re clear, knitting needles are easy to come by. Knitters have them by the dozens. They’re mass-produced and generally affordable, since people often lose them. And not only did this woman blame the crew for something she herself had lost, she made them go through piles and piles of trash (having accused them of throwing it out), and then didn’t bother to tell them when she actually did find her needle. Which clearly wasn’t that important to her, anyway, because she spent the last half of the flight sleeping, and not knitting.

So while I really, really didn’t think it necessary to point this out, it seems kind of important to say in the wake of this event. Ahem – IF YOU LOSE SOMETHING WITH ZERO MONETARY OR SENTIMENTAL VALUE ON A PLANE, TRY NOT TO BE A TOTAL ASSHOLE ABOUT IT. I watched the whole scene in shock, and when I explained what had happened to my husband, he replied with “Dude … dick move.”

P.S. – I would like to note that one of my friends is an avid knitter, and I’m pretty sure if someone actually threw out her needle, she’d be like, “What a bunch of assholes!” but that would be about it. Because she’s reasonable. And sane. She wouldn’t have them looking through piles and piles of trash.