I like you guys. A lot. I’m smitten over the old movie stills and quotes that line the walls of your hotel. Just a few years ago, I went through a brief period where I refused to watch any movie made after 1955. This proved fairly challenging for my husband. It was the early days of Netflix, so their selection was far more limited than it is now, so he’d basically just add anything starring Cary Grant to our queue.

At the time we were so broke, the $25 a month subscription fee seemed extravagant. But when we’d curl up together on his god-awful-looked-like-it-came-from-the-set-of-Wall-Street couch and watch Bogey and Bacall fall in love, it seemed worth it.

My point is, Hotel Deluxe, I totally get what you’re trying to do. It’s charming and wonderful and totally romantic. That being said, you need to do a bit of editing. Because while having a photo of James Dean or Marlon Brando hanging over your hotel bed is completely acceptable, this is not: 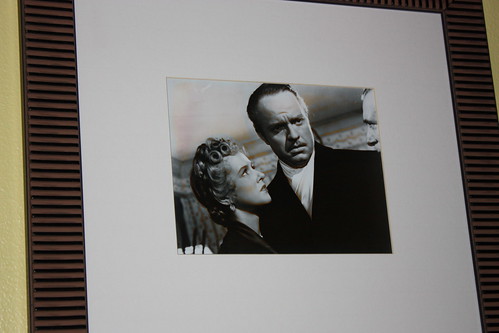 That’s a picture of Orson Effing Welles. And he looks pissed. Thanks to this lovely photo, HANGING DIRECTLY ABOVE OUR BED, I dreamt that he was devouring me alive in a giant sandwich. Rosebud … Henri … with mustard.

Don’t get me wrong – in his younger years, he was a cool tumbler of water. But you used a picture from Citizen Kane. I … I don’t even know what to do with that. I mean, you might as well go with this. Either way, I’m having nightmares.

I’m just saying … you might want to reconsider. May I suggest that scene from Notorious where Cary Grant and Ingrid Bergman are making out?