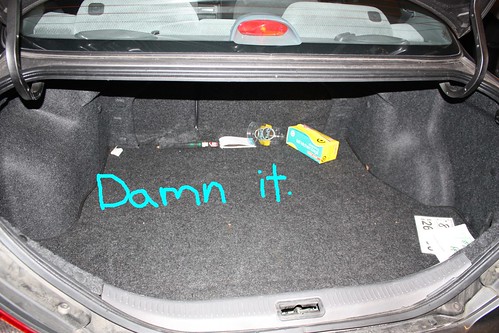 Seriously, I’m so effing angry/shocked/bemused, I’m having trouble writing this post. But I will write it. I MUST write it. Because, gentle reader(s), you must know about this Dick Move. Especially if you take road trips. Or go anywhere in your car.

Remember how I said never to leave anything in your trunk? How I’ve mentioned it repeatedly – here, and also here? Well, just to make sure the message sticks: NEVER LEAVE ANYTHING IN YOUR TRUNK. Ever. I don’t care if it’s for five minutes. And you’ve parked across the street from your destination. And it’s three in the afternoon on a sunny afternoon and there are frequent cops driving past. Don’t do it.

Sigh. This isn’t very hypothetical, is it? So here’s the deal:

Rand bought me a new laptop for my birthday. And since I hate suspense, I will tell you now that it’s safe and sound in my bedroom. However, I decided to make an extra trip home just to drop it off before running an errand in Belltown. Rand suggested I could just take it in my purse, but then I had this weird thought that the laptop would be fine but the charger and instruction manuals would get stolen.

“No,” I told him. “I’ll just take it home.” And I did. THANK HOLY JESUS ON A POGO STICK, I did. That is why my computer is safe and sound.

Because after that, I went to Belltown to get some clothes altered (including a coat for an upcoming trip to NYC, both of which I am crazy excited about). The Belltown neighborhood (which spans north and east from the Pike Place Market) is generally sketchy at night, and the trunk of my KIA has been broken into at least three times while there. But it was three in the afternoon, sunny, and totally gorgeous out. The biggest thing I had to worry about was sidewalk pooh. Plus, I was parking across the street from my seamstress’ place, and I was going to be gone all of 20 minutes. I wasn’t really concerned.

Plus, there wasn’t anything of value in my car.

When she was done marking and measuring my alterations, I headed back. Incidentally, I noticed a kind of sketchy dude, who had been sitting on the street near my car, get up and book it when he saw me come. (In retrospect, I don’t think he was the culprit, but I think he saw what happened and figured it was best to get out of there. Or maybe it was my magnetic personality. One can never tell). I got in and drove away.

While driving, I heard a weird squeaking noise (sadly, my hopes that pair of chipmunks took residence in my glove compartment, creating a Rescue Rangers-style abode, was not the case). When I reached the grocery store I realized the noise was from the hood of my trunk creeping open.

“Damn.” I thought. Okay, fine –  I actually thought something worse than “damn.” But this is a family site. Sorta. I mean, the people who read this site have families, right? And some of them are legally still allowed to spend time with them. So there. Anywho, I looked inside my trunk, and sure enough, it was empty. Now, remember, I said never to leave anything of value in your car. And I stand by that. But these things weren’t valuable. All in all, the crooks took:

PLEASE EXPLAIN TO ME WHAT THE HELL YOU CAN DO WITH THOSE ITEMS. What the eff could have gone through someone’s head when they grabbed a velvet curtain and ran off with it? It most likely won’t go with your decor, petty thief, BECAUSE YOU PROBABLY DON’T HAVE A HOUSE.

I’m most upset about the Fix-a-flat. That shit is useful. And of course I kept it in my trunk because WHERE ELSE WOULD I PUT IT?

Seriously. Damn it. At least my various CDs, my favorite water bottle, and all the items inside the passenger compartment of my car are fine. As is, of course, my beloved computer.

Next time, I might just be waiting for you … 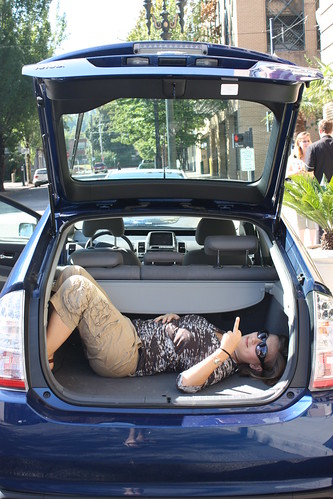 Oh my god, wouldn't you totally poop your pants if you broke into a car and there was a woman in the trunk?

P.S. to Petty Thieves/Drug Users – Please do not try inhaling the Fix-a-flat in an attempt to get high. While conceptually hysterical, it would be very, very bad in real life. That stuff expands.