This post marks 1 month (four weeks) of consecutive posting. So I figured this entry had better be a doozy. And considering that it began more than 10 years ago, I suppose it is.

It begins with a clock.

It begins with a book.

No, no that’s not right, either.

Let’s just begin with a chimp. Because all great stories begin with chimps.

A few weeks ago, I read an article in The New York Times about Harry Raven, and the chimp who bullied him as a child. Harry’s father, Henry Cushier Raven, was a curator at The American Museum of Natural History in New York. Returning from one of his many expeditions to Africa, he brought home a female chimp named Meshie.

She made Harry miserable. Indeed, she made everyone in Harry’s family miserable, save for his father. The story is sad and fascinating, and incredibly, quite relatable, as was Harry’s need to go see the chimp, now taxidermied in one of the glass display cases at the museum (unfortunately, I found out about this after our NYC trip, and didn’t get the chance to see Meshie myself).

She was rotten and horrible but had been a huge part of his life. And so he had to see her. I understood perfectly, if to a lesser degree. For me, it was about a clock. A miserable, rotten clock. A clock and a story that my father adored, but one that had me pulling my hair out.

It all started in 1998. It was my senior year of high school, and I was taking some sort of materials science class, the name of which escapes me now. Our instructor didn’t have a teaching background. He was a former Boeing engineer, it was his first year on the job, and he was woefully out-numbered. It wasn’t long before we all went Lord of the Flies on him, doing little else but goofing off and working on assignments for other classes. Fortunately, the fat kid was spared.

For reasons that make sense (though the specifics are lost to me now) he was replaced by our old Chemistry teacher towards the end of the year. She had been profoundly fed up by the Boeing engineer’s inabilities to reign us in, and stepped in because we were all miserably unprepared for our IB exam in a subject I can’t quite remember.

Nor can I remember, for the life of me, the Chemistry teacher’s name. She was a wonderful person, and one of my favorites, but it’s just escaped me … It was something Irish, I think. Before she stepped in, we had prided ourselves on having learned virtually nothing the entire year. Hell bent on changing that, and with just a few weeks left to our senior year, she assigned us the book  Longitude: The True Story of a Lone Genius Who Solved the Greatest Scientific Problem of His Time.

I still haven’t quite forgiven her.

It’s the story of John Harrison, a clockmaker who was determined to figure out how to tell a ship’s exact location at sea. In the early 18th century, ships were frequently lost or ended up woefully off course. In 1714, Parliament passed the Longitude Act, offering 20,000 pounds (millions of dollars by today’s standards) to the first person who could find a method for accurately detecting longitude while at sea, to an accuracy of half a degree. Harrison was convinced that the solution lay in creating a clock that could accurate tell time while at sea. 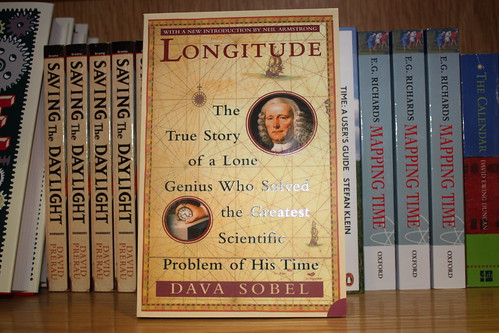 This book is my white whale.

I’m sure you are wondering what the hell time has to do with location, and I won’t lie – I suck at explaining it. So I’ve stolen at tidbit from the National Maritime Museum in Greenwich:

Therefore, if we know the local times at two points on Earth, we can use the difference between them to calculate how far apart those places are in longitude, east or west.

This idea was very important to sailors and navigators in the 17th century. They could measure the local time, wherever they were by observing the Sun, but navigation required that they also know the time at some reference point, e.g. Greenwich, in order to calculate their longitude.

At this point in history, detecting accurate time (and consequently, detecting an accurate degree of longitude) was near impossible. And Harrison, brilliant and boring old fool that he was, ended up creating FOUR DAMN clocks, the last of which finally won Parliament’s prize (after quite a bit of convincing and trouble on his part). By then Harrison was in his 70s, and he died rich and vindicated. It’s actually a nice little story. It’s just not 192 pages worth of interesting. Especially when you are a 17-year-old girl who’s had a perfectly wonderful time goofing off in the one class that allowed her to do so, with only 2 months of high school left.

We hated the book. My friend Laura and I complained about it incessantly, as did Laura’s friend Erin, and we found it perversely amusing that our fathers all adored the book. My half-brother, Greg, loved it so much that he went to see the damn clock in the Royal Observatory at Greenwich (which to me was the height of madness). They could not understand why we hated it so much.

But hate it I did. And for 12 years, John Harrison and his damn clock followed me. I thought about it anytime I thought of the sea, of clocks, of boredom, of being lost. I’d never be free of it.

Unless, I realized, I visited the damn clock.

Like Harry Raven needed to see his old foe, Meshie, at the Natural History Museum, I needed to see Harrison’s clock for myself, imprisoned behind glass, unable to hurt or bore me. I needed to go to Greenwich.

Note from the Everywhereist: Since I have no sense of direction, and I found out the hard way that Greenwich and North Greenwich are not actually the same place, getting to the Royal Observatory proved an adventure unto itself. Be sure to come back on Monday for the “exciting” conclusion of A Bully Behind Glass: Finding John Harrison’s Clock.