I feel like I need to start this off with some sort of caveat about my complex and often contradictory feelings towards vegetarians. Some of my closest friends eschew flesh, which I personally find insane but acknowledge it as a legitimate lifestyle choice for others (sort of like skinny jeans). After all, it literally leaves more meat for me. By pure definition of being my friends, the vegetarians in my life are understanding and non-judgmental (I seek out in others the characteristics I lack) and consequently would not dream of giving someone a hard time for being, say, an indiscriminate, blood-slurping carnivore.

It is the judgmental vegetarians with whom I have a problem. The holier-than-thou, that-thing-you’re-eating-was-once-alive, I’m-cranky-because-I-don’t-get-enough-protein jerks who I have had the occassional misfortune of encountering. Those vegetarians suck.

I would gladly take one of those vegetarians to Borough Market, because they would FREAK THE HELL OUT.

Oh, how they would freak out. Because Borough Market is a carnivore’s dream come true. An endless stream of meats culled from all sorts of magically delicious animals, prepared in every way imaginable, and served up piping hot. For a girl like me, raised on tripe and pig’s feet, and all manner of offal that I assumed everyone else ate, it’s like the lovechild of Disneyland and a slab of bacon.

Rand and I went on the recommendation of some friends of ours who were locals. Upon first arriving, we were seriously disappointed … 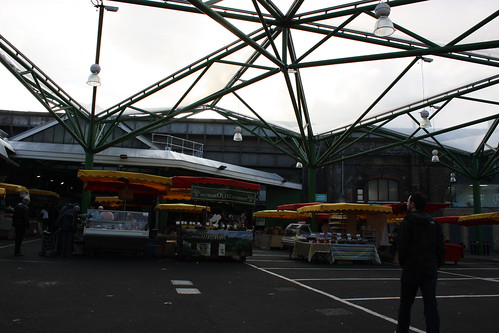 We kept walking, and found that the market expanded far beyond the near-empty pavillion we found ourselves in. 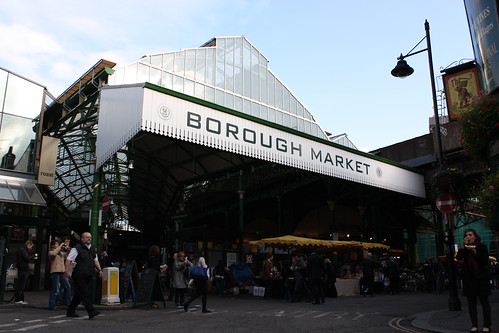 I was on a mission for steak and kidney pie, and was determined not to settle for something else. Rand, on the other hand, just wanted something really, really delicious. We saw some guys who were on their lunch break eating fresh-cooked ravioli, and Rand asked them what they thought.

I will tell you now, asking an Englishman what he thinks of his food is an absolutely pointless exercise. Putting issues of a dark culinary history aside, England is really coming into its own, gastronomically speaking. There are some amazing places to eat in London. The problem is that you won’t get a straight answer out of anyone as to which places are good, and which are rubbish. Maybe they can’t tell. Or maybe they’re too polite to tell. But I will say this: We had some fantastic food, and some utter crap food, both of which was described as “quite nice” by the locals around us.

So when Rand asked the guys about the ravioli, and they said, “It’s quite nice,” it meant absolutely nothing. But it looked really good, and was ridiculously fresh, so Rand went ahead and ordered some. 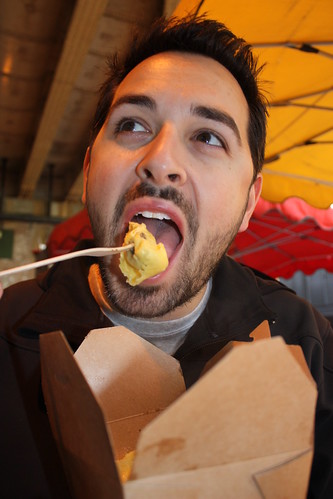 "Quite nice" was the understatement of the year.

It was friggin fantastic. We got a mix of spinach-ricotta ravioli and beef ravioli, both in a sage-brown-butter sauce. It was dense and chewy without being too heavy, and perfectly seasoned. I told Rand, “I want to get that ravioli pregnant” and the guys behind the counter just stared at me. I’m fairly sure the above photo was taken minutes before I tried to wrestle that ravioli out of Rand’s hand. There might have been some pushing and shoving involved. There might have been cries of “YOU LOVE THE RAVIOLI MORE THAN ME!” and responses of “YOU’RE GODDAMN RIGHT I DO!”

All for what the English guys described at “quite nice”. Seriously, England. Get on the ball. If you show passion about something, people will try to present you with the best articulation of that thing. It’s why Americans are crap at soccer – we just don’t care about it. That’s why the Italians are good at making wine. And it’s why English food has historically sucked. Because if I serve you crap, and I serve you something fantastic, and your reaction is the same, what the hell is my incentive?

My point is, your love for something should be apparent. And that goes well beyond just food.

Phew. Okay, sorry. Rant over. Let’s get back to the carnivore’s dream that is Borough. I call this photo “Moderately Attractive and the Beast”: 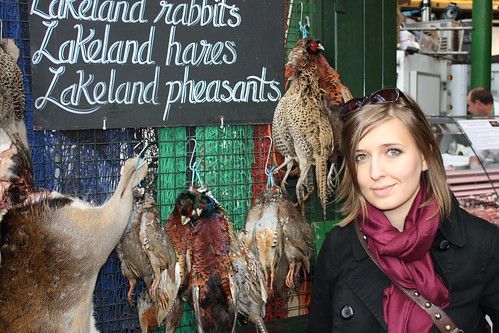 Don't tell me I don't got game.

And, call me perverse, but I find the way this lamb’s little legs are sticking up in the air kind of cute: 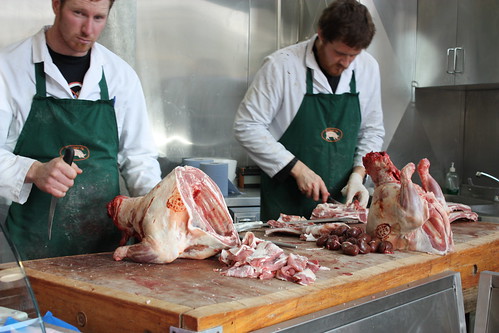 I think the guy on the left is giving me a "Come hither" look. Which may have worked, were I unmarried, and that meat cooked in some sort of pie.

Too much? Okay, fine. Here’s a photo of vegetables: 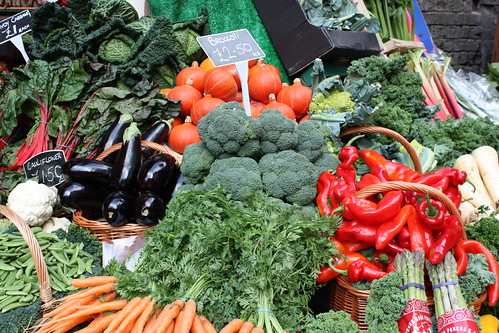 Don't fill up on these. We've still got a lot of meat to cover.

There. Can we go back to talking about meat now? Good. I took this photo for a friend of mine. Make up your own joke: 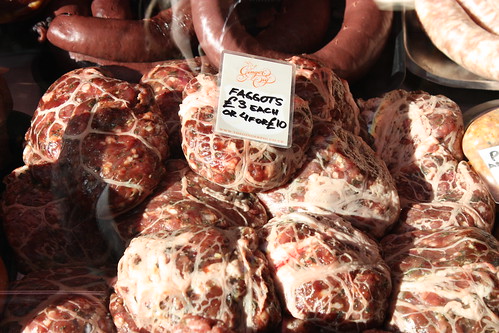 Since we’re still deliriously happy from the results of Tuesday’s election and the passing of Referendum 71, I figure I can make a few off-color comments.

And then we found Jamon Iberico from Spain. Oh, joy of joys. It’s acorn-fed, and very similar to prosciutto, though the meat feels … I don’t know – darker? More rustic? I feel like the jamon is to prosciutto what country pate is to smooth terrine (man, do I love analogies that compare food to food!). They had this fantastic contraption holding the leg in place while the kid behind the counter sliced off pieces and offered us a taste. I have to admit, even for me, the site of the pig’s hoof at the end was a bit shocking. Awesome, but shocking: 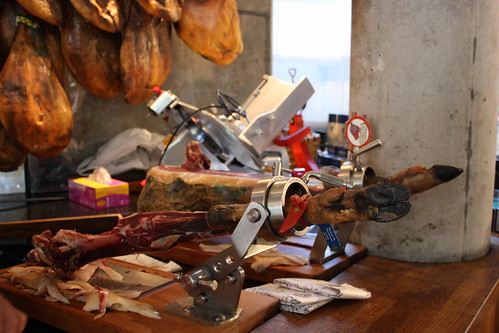 Still, I’m all for owning up to where your food comes from, for realizing and acknowledging that meat doesn’t magically come in plastic packages. It reminded me of the leg of cured ham my mom would buy from Path Super Foods when we lived in Indialantic, Florida. With a huge pig’s leg sitting in your fridge, you can’t really deny anything. It kept us honest carnivores, I think. And it was delicious.

But I might have gotten a bit off-track – both at the market and in this post. As you’ll remember, this whole time I was looking for a hot steak and kidney pie, and there didn’t seem to be any about. Some places were sold out of hot ones, or out of steak-and-kidney pies in general. There were cold meat pies of every variety, and I was nearly tempted by the wild game variety that we saw at one stand … 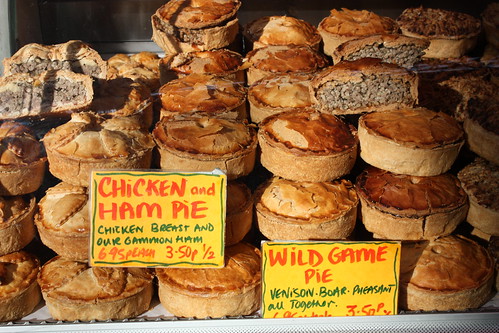 I managed to walk away, though. I figured I couldn’t come this far and then settle for something less than what I wanted. And then, at an unassuming stand with a sign that read, simply, “Handmade by me. England’s Best Pies,” there was exactly one hot steak-and-kidney pie left. And it was perfect. 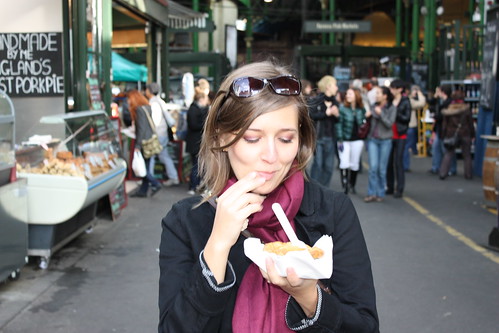 It’s funny, because I tried to think of the last time I looked at anything that way, and found this: 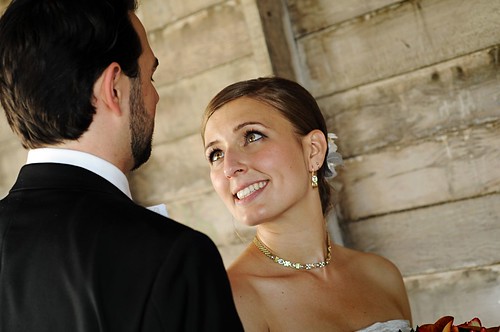 "I find you as delectable as a meat pie. And thankfully less ephemeral."

It’s just one of those moments where you get exactly what you want. For me, it happens when I’m either marrying the love of my life, or have just found really, really good food.

There’s a part in Willy Wonka and the Chocolate Factory, where Wonka says, “Don’t forget what happened to the boy who suddenly got everything he ever wanted.”

I remember feeling my heart pinch the first time I heard that. Here, amidst all of Charlie’s joy and candy, there was going to be a moral, and I wanted no part of it. I felt fear in my heart when Charlie asked what happened to the boy.

And then Wonka replied, “He lived happily ever after.”

And so did we.