The other day, my friend Kim and I were defending our tendency to wash out and re-use Zip-loc plastic bags. Apparently our hoighty-toighty significant others find it “gouache”.

WHICH IT SO IS NOT. Those things are expensive (besides, we’re saving the planet). In middle school, we only had the fold-over closure plastic sandwich bags in my house, and oh, how I envied the popular girls with their Zip-loc bags, which seemed the height of opulence to me. The would walk into the cafeteria in their crisp Esprit outfits, their pristine-white Keds squeaking against the floor, and pull the pricey plastic baggies out of their lunch sacks, filled with treats like Pringles or strawberries. Now that I’m finally able to afford such luxuries, there’s no way I’d just throw them in the trash.

It’s just that – well, I love saving money. Don’t get me wrong – I love spending it, too. But it’s just sooo much fun to get things on sale, to peel back the sale stickers on something and see what it would have originally cost someone crazy enough to pay full price. When I was a kid, bargain shopping came out of necessity – and I learned to be really, really creative while on a budget. Personally, I think I did well even if, in retrospect, I looked insane at times … 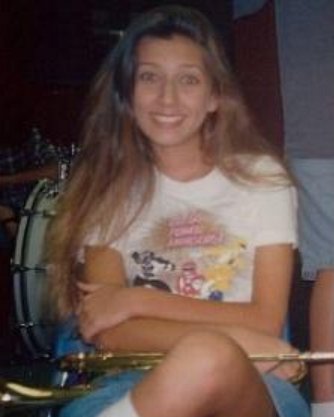 Basically, I ended up dressing like Alicia Silverstone‘s character in Clueless. Which, depending on how you look at it, is either really cool or really tragic.

And now that I can actually afford to shop in the “normal” stores, I’m still a huge fan of budget shopping and thrift stores. Which is one of the reasons I love heading down to Southern California. There’s a wealth of second-hand stores, which carry items that you’d never, ever expect to find up here in Seattle. Like racks and racks of winter clothes, jackets, and coats. I guess people who move down to San Diego realize they’ll never need them again. For some reason, someone also thought they’d never need these again, either … 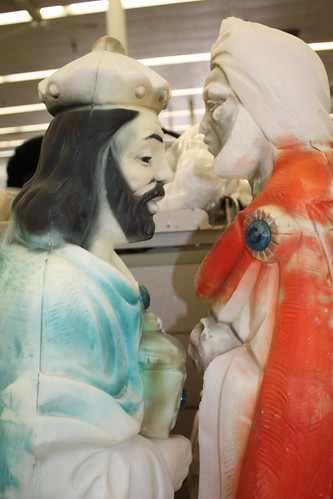 I don't know what happened to the third wise man. He probably left because the sexual tension between these two made him uncomfortable.

If you owned these, please explain to me why you’d ever give them away. They’re two huge plastic wise men. I can think of at least 15 things they’d be good for around the house. Unfortunately, they had already found a home, as they were in someone’s cart. And, I feel it’s important to note, it wasn’t anywhere near the holidays. These photos are from mid-July.

I also found a ridiculously powerful flash for my camera. I tested it out in the store, and found that everything I photographed was overexposed … (as were a lot of people. This thrift store didn’t have dressing rooms, so people just tried on clothes in the middle of the aisles). 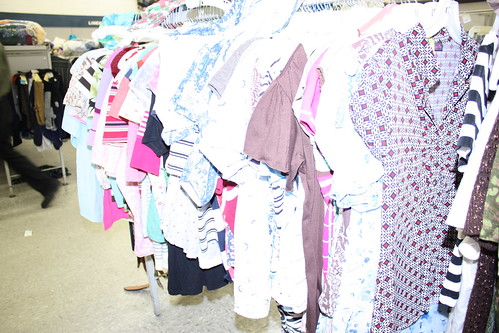 Pretty sure the camera's flash temporarily blinded anyone in the vicinity of these shirts. Which means the blouse on the end actually has a chance of being purchased.

I’m sure my new overly-bright flash will come in handy during one of my trips … like, say, if I get lost in the woods and need to signal an airplane, or I’m running from Bigfoot and need to temporarily disorient him.

In addition to second-hand stores, So Cal also features what amounts to shopping Mecca for bargain hunters like myself. They have  a store called – and I cannot make this up – “Everything $5.99“. Not “Everything is $5.99.”, mind you, but “Everything $5.99.” If grammatical errors are baked into the name, you know it’s going to be good. And, oh, dear friends, it is: 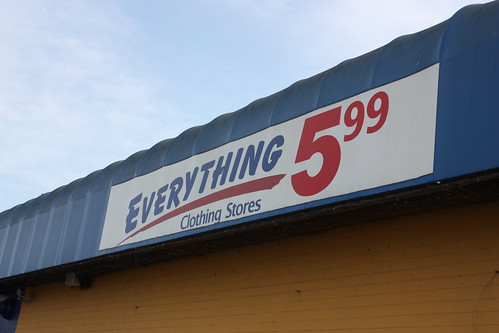 I imagine that if you ask someone who works there how much something is, they scream the name of the store at you.

The place is a total riot. It’s literally targets people for whom Ross is too opulent. So, naturally, my family and I are absolutely obsessed with this place. They have bin shopping. You know that when a store can’t actually be bothered to do more than toss a bunch of items in a bin, and slap a universal price tag on front of it for whatever the contents may be, that you are in for a magical shopping experience. Plus, you’ll find stuff for even cheaper than $5.99 therein. 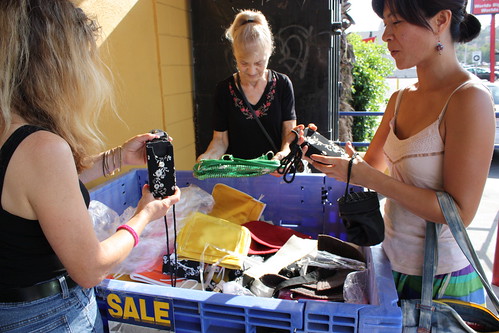 My mom, my Auntie P, and my cousin's girlfriend had a fun time rummaging in the bin full of random, occasionally broken, and sometimes inexplicably MELTED purses, all marked 2 for $1.

I left with two unimpeachably cute dresses (one was only $3.99) and a shirt (for which, to this day, I think I overpaid). I love taking these items with me on vacation, because if they are ever stolen, I will laugh and laugh because I am out $16, and then I will head back down to San Diego to replace them.

It’s actually a nice bonding ritual we have in my family – I go with my mom and my aunt (and occasionally even my uncle and cousins) to the thrift or discount stores, and we dig through the racks, asking one another’s opinions and trying to figure out if $11 is too much to pay for a military-style jacket (at the time I thought it was … I still regret that move, especially when I saw this, priced at $98. Damn it).

Sadly, I doubt I’ll be doing much shopping this trip, since my Auntie P. is out of comission, and mobility is not something she’d include in her list of talents right now. Which is fine, really, because I enjoy shopping with her much more than I do without. Even when she’s not around, I can imagine her shopping along with me, saying things like, “Ooooh, Geraldi, that’s nice. I never understand why people want to spend too much money when they can find nice things like that for so little.”