When Rand and I flew into Chicago last week, it was frosty and freezing, and already dark.

Those of you who know us realize that wasn’t an excuse to sit in our hotel room while a city waits (though I wouldn’t have entirely been against that. You hear me, Fishkin?). It was a freezing, quiet Monday night, so we buttoned up and went out to explore the city.

And holy cats, was it cold.

We headed to Millennium Park, which was a few blocks’ walk from our hotel. There was an ice skating rink full of skaters, and I later found out that it was the site of my old boss’s first date with her hubby. 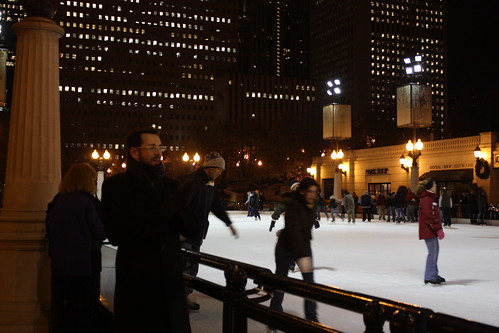 And of course, since it’s December, there’s always one crazy dude in the bunch: Shorts, t-shirt, and gloves guy. I often encounter him in Seattle (a few times, in fact, he’s been one of my cousins), so I was very excited to see him so far from home in Chicago. I was never able to figure out how he stayed warm, until I concluded he’s some sort of mutant penguin. 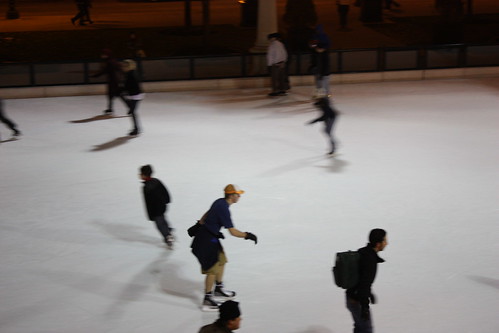 I’ve seen him all over the world – in Stockholm in November, Oslo in October, Boston, Seattle, Vancouver, and now Chicago. His invulnerability to cold never seems to amaze me, and yet … he’s often wearing gloves. I suspect cold hands are his kryptonite. If you’ve seen this D-list superhero in your own travels, please do share your stories.

Overlooking the skating rink in Millenium Park is a huge metal donut. I suppose I should have looked up its proper name, but I’ve decided to call it the Millennium Donut (okay, fine – apparently it’s called “Cloud Gate”, and is the first U.S. public outdoor piece done by British artist Anish Kapoor. But I’m still calling it “Millennium Donut,” and so should you). 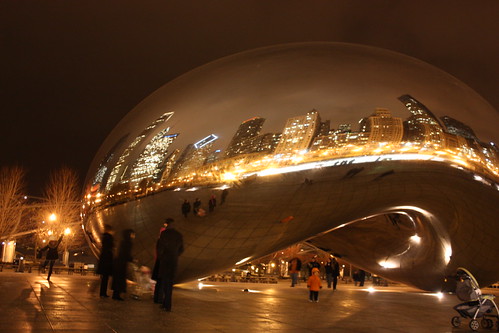 Unfortunately, I lack a steady hand (gunslinging is not in my future), so a lot of the photos of took of the park at night came out blurry. It was beautiful, and the light in these images is pretty accurate. Everything had kind of an amethyst glow. I need to invest in a low-light lens, or maybe a tripod, and go back. 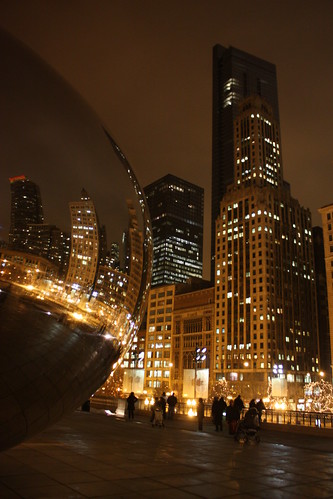 Though a little blurry, I am still incredibly proud of this.

From the park there’s a walkway that leads to the modern wing of the Chicago Art Institute. I went to the art institute the next day on my own (Rand was busy) but the walkway itself is far cooler at night. 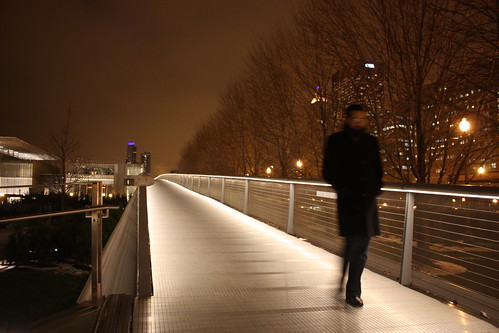 Seeing Rand walking on the pathway alone, clutching his overcoat, reminded me of Dennis Stock’s photo of James Dean in Times Square. I had a bit of a James Dean obsession in high school. I’m not quite sure why I remembered that particular image, since it wasn’t one of the dozens I had all over my bedroom. Just stuck with me, I suppose. 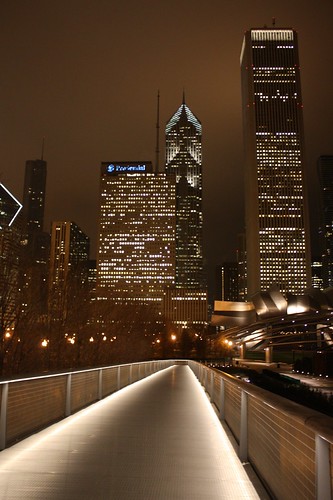 Looking back on Millenium Park from the top of the walkway ... 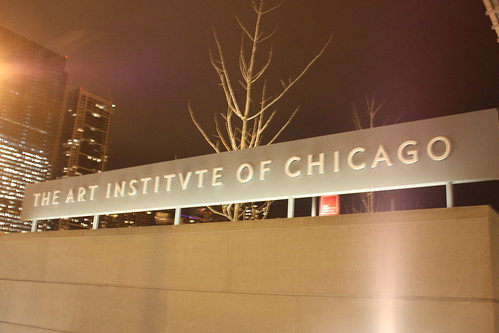 I cannot BELIEVE they spelled their name wrong on their own sign. It's "institute" not "institvte". Duh.

Now, if you’ll excuse me, I’ve gotten a chill just from looking through these photos. I’m off to find a blanket, and check if we have anything to snack on. I could totally go for a Millennium Donut right now …