You can read the entire article here. But I wouldn’t, as I had to use a great deal of willpower to not jab myself in the eye with a spoon after reading it. It is entitled, I SHIT YOU NOT, “How Not to Feel Humiliated While Dining Alone.” It features a photo of an attractive woman looking dubiously at a book.

Of course, what the article presupposes is that eating alone is grounds for humiliation. Humiliation that is so extreme, they provide not one, but eight brilliant solutions as to how to avoid the clearly miserable situation of being seen without a husband in public (okay – maybe I’m reading into it a bit. But not much). Perhaps my favorite is number 6, which encourages you to pretend to be interested in whatever sports game is playing on the tv in order to give yourself “a sense of purpose” (after all, what woman would actually care about sports!).

Besides reading like it was written by Betty Draper, the article bugged me because I didn’t really understand what the hell they were talking about. Don’t get me wrong: I love having company when I do just about anything (just about). I’m one of those girls who will leave for the bathroom in packs of three. I talk to my husband while he’s in the shower. I offer to hold friends’ hair when they puke. I don’t mind being around people, even under less-than-ideal circumstances. But I’ve learned to appreciate time alone.

And the more I travel, the less it feels like time alone. Sure, Rand is with me at the end of the day, but when I’m roaming around a foreign city by my lonesome, it’s almost as though he’s still there. I take photos, think about about the blog posts I’ll write and the things I’ll tell him about. I enjoy the time I share with people I’ll never see again on public transportation or in museums. I don’t ever feel truly alone, and if I did, I doubt I would find the experience “humiliating.” Instead, I kind of think of it as badass.

So, of course, that extends to dining as well. When I’m out eating by myself (which happens all the time, if Rand is at a meeting or a conference), I talk to waitstaff, smile at other patrons (many of whom are – gasp! – on their own as well), and watch people passing by. I enjoy being, for even a little while, part of a city that I don’t know all that well. It’s kind of wonderful. And I don’t need a friggin crappy ass guide to tell me how to avoid being humiliated by the experience. 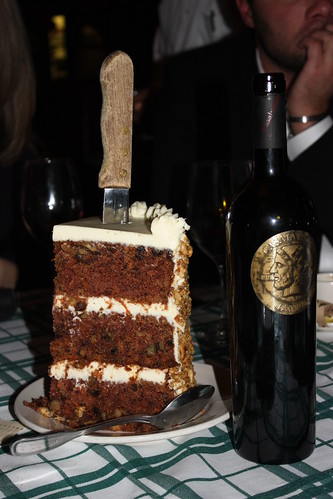 Plus, when you eat with people, they expect you to share both your wine and your nearly-as-tall-as-the-wine-bottle slice of cake. Weak.

For that matter, I don’t need someone to tell me to pretend to care about sports, either. And while I could go off on a sports-related tangent about how I really want to see Peyton Manning and the Colts spank the Jets this weekend, even though, seriously, it should have been the Chargers in the divisional championship because poor Sanchez is totally out of his element as a rookie (though give him a couple years and I think he’ll be pretty damn good), and I honestly hope that Peyton doesn’t end up playing down to the Jets like Rivers did last weekend, which TOTALLY BLEW, I will instead say this: Yahoo! Shine kinda sucks.