I kind of hate Cory Doctorow. Like that one kid I can’t stand but keep seeing at parties, I can’t remember why I hate him, but I’m sure I have a good reason. For a while, I thought my animosity stemmed from some run-in he had with my hubby during which he wasn’t polite to him, but apparently I fabricated that. Rand’s never actually met Cory Doctorow, though he seems to think, based on what he’s read, that he’s pretty cool.

Then I thought I disliked Doctorow because he named his daughter Poesy Emmeline Fibonacci Nautilus Taylor Doctorow (Note: in the original draft of this post, which exists only in my head, I had composed some fictitious name for his daughter that was something like “Frenchie Spaghetti Tyro Brahe Doctorow,” and changed it after realizing her real name is far, far better). But then, the more I considered it, I realized how unfair that was, because how can you hate a man for the name he gave his daughter? Really, that will be her job when she’s 13. Besides, Emmeline sounds quite lovely.

But I still hate Cory Doctorow … right? I mean, even though he seems kind of interesting and accomplished and volunteered for Greenpeace and is probably a cool guy. I’m sure I have my reasons, whatever they are.

And it was those clearly thought-out and not-at-all forgotten reasons that had me conflicted about blogging about this STINK.  Because, frankly it seems weird to cover something that  Cory Doctorow already wrote about. Oh, and I was also conflicted about the fact that I have to suggest you all go out and buy guns. And travel with them.

Hello? Are you still there?

Because this is insane. And I don’t actually advocate it, but it is pretty damn fascinating. Doctorow’s advice, gleaned from this blog entry, is that if you want to make sure the airline doesn’t lose your checked luggage, you can always pack a gun in your bag. When you notify the airline (during check-in) that you are carry a weapon (legally, of course), they are required to take extra steps to secure your bag, lock it, and track it like hawks. So not only is your bag less likely to be lost altogether, but the odds of someone reaching in and helping themselves to your valuables becomes pretty much nil.

If you’re like me (god help you), you’ve probably managed to injure yourself while opening the mail. Consequently, the idea of not only owning, but packing and traveling with a weapon sounds horrifying. Besides that, wouldn’t acquiring and registering a weapon actually be a ton of work? Apparently not. The TSA considers starter pistols (as in those little pistols that fire blanks and make a loud noise to signal the start of a track meet) to meet their gun criteria – as in, they’ll track your bag if you’ve got one in there. But according to U.S. laws, you don’t actually need to register starter pistols anywhere.

Of course, I’m not saying that you absolutely must travel with a starter pistol – truth be told, the whole idea sounds insane to me, and potentially disastrous. But given the course of the TSA as of late, and how you basically can’t sneeze or even pray on a plane without getting yourself into trouble, it’s kind of comforting to think that there are things you can do to make sure the TSA works for you.

It just involves carrying a gun. 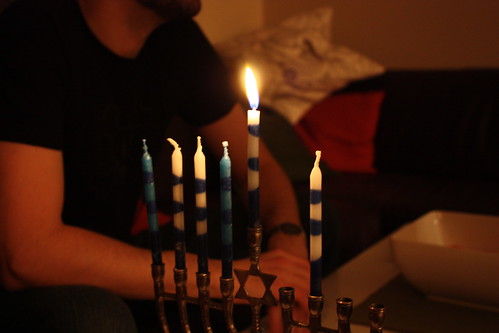 Of course, the closest we've ever come to packing heat was the time Rand has a menorah in his suitcase. Ba-dum-dum!