I’m still kicking the last of my cold, and while I’m completely exhausted, I’ve discovered that even 2 nights of taking NyQuil is enough to create dependency. As such, I couldn’t sleep last night, trying to figure out if one could become a meth-addict just by taking too much Sudafed. While I have no definitive proof of it, I’m pretty sure the answer is “yes.”

Still, I’m grateful that this cold hit me now, while we’re at home, rather than sometime in the next few weeks, when Rand and I will visit London, Glasgow, New Orleans, San Diego, and a few places in between. Because while being sick sucks, it’s far better to have it happen at home than one the road. When Pinguina and I last went to Italy, we both got crazy sick  (Pinguina was actually on antibiotics for whatever decided to take up residence in her throat) and lugging our huge suitcases across the country was not fun (p.s. to Italian men: if you are going to be sexist assholes, at least have the decency to be chivalrous, and help us with our bags). 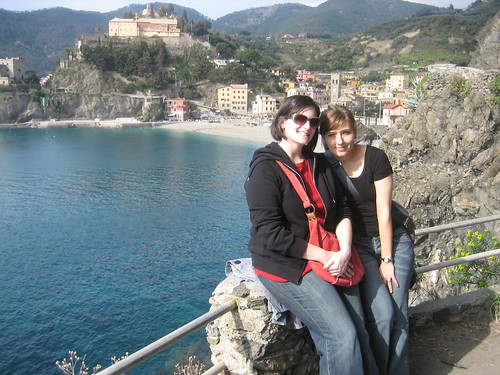 Don't let the adorability of this photo fool you: Pinguina and I almost passed out on this trail roughly 20 minutes later.

Anyway, I’ve been thinking about what, exactly, one should do when they’re on vacation and sick. While none of these ideas are as good as being healthy, they just might help the medicine go down a little easier …

Now, if you’ll excuse me, I’m going to spend the rest of the day on the couch in my pyjamas watching reality television. It’s, I’m fairly sure, the most socially responsible thing I could do right now.