A few months ago, we went to London so Rand could get some work done, and I could roam around the city and do fuck-all.

My life is good.

Our lovely friend Ben was with us, as he works with Rand, and their London colleagues needed him to reach things on the top shelf. No, wait. That wasn’t it. No. They needed Ben to provide the sort of unique and brilliant insight only he can offer. Besides that, he is very tall. Behold: 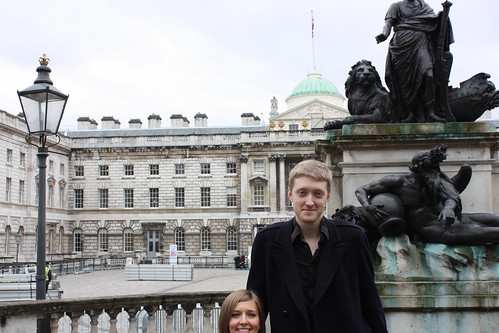 The title of this photo is "Tiny Everywhereist, Tall Ben"

Okay, fine, so maybe, just maybe, I’m crouching in the above photo for dramatic effect. Ben isn’t quite that tall, but when you see the real photo of me standing next to him, it isn’t that dramatically different: 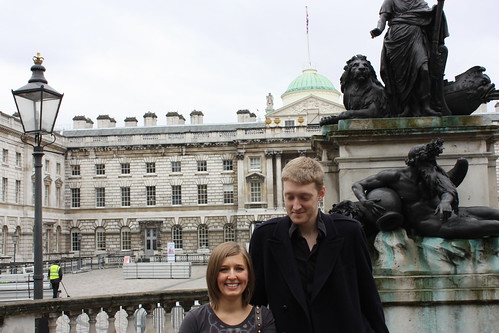 I like how he's looking down at me, somewhat bemused. "HOW'S THE WEATHER DOWN THERE? HA HA HA HA."

Notice how in both of those photos he’s kind of slouching. For some reason, I find Ben’s height totally fascinating, and fortunately he’s a very good sport about it. He has been for the 15+ years that we’ve known each other (and during that time, I don’t actually suspect he’s gotten any taller). I always make comments about what it must be like for Ben to fly coach or ride in the back seat of a car, and on this trip, I found out (Quote from Ben: “It’s pretty easy. I fold well.”). And I always wondered what it must be like for the people who have to sit behind him in a theater. And on this trip, I found that out too.

Though, to be honest, Ben basically fell asleep in his seat, so he was slouching quite a bit. Oh, and I’m pretty sure whoever was sitting behind him was asleep, too.

The moral of this story? Don’t ever believe theatrical reviews, especially if they are written by someone with different cultural references than you.

But I should probably start at the beginning. As I mentioned, we were in London, and while we had hoped for more free time to spend in the city, Ben and Rand ended up working quite a bit, leaving Ben with really only one night to hang out in London. And Rand and I came up with the otherwise great idea to see a play. The problem arose when Rand let me choose the play.

Having had a faint memory of once reading part of one of the plays being performed, and having seen about a half dozen glowing reviews for the same play, I picked it as the one we would see. The Times Online said “its tragicomic poise” made it “utterly compelling.” Another said it was “suprisingly watchable,” featuring “top-notch performances” from excellent actors. Still another said there was plenty of “gallows humor” on display, peppered with vaudevillian moments (am I wrong, or shouldn’t that suggest it’s somewhat funny?). No one gave it less than four stars. In short, they said, it was brilliant.

They’re all a bunch of liars.

Seriously, folks, heed my words: If you are an American, never, ever, listen to a play review about the comedic merits of something from a Briton. Because the results will be bad. You will try your best to be excited about it, but halfway through you’ll want to walk out (except there’s no damn intermission) and somewhere along the line you’ll realize that both your husband and your friend are asleep, as is 1/4 of the audience (confusing, because shouldn’t they, as Britons, have found it funny?) and you will want to hunt down the theatrical reviewer and strangle them with their own cravat (which you assume they wear all the time, along with a smoking jacket).

I suppose I should have known better. I suppose that taking two unsuspecting gentleman to see Endgame, arguably Beckett’s worse and most depressing play, was never going end well. But I believe in the power of reviews. If someone tells me something is fantastic, I will believe them, even if all my instincts and every single fiber of my body screams out to the contrary. I just assume that people don’t like crap, and that they won’t lead me astray. It’s why I rented and consequently watched nine painful minutes of a movie called “How to Lose a Guy in 10 Days.” It’s why I went to see “Daredevil” in the theater. (Note: not like you ever would, but don’t see either of those movies, ever. Instead, beat your head with a piece of wood while watching Fox News. It’s about as enjoyable.)

Some of you are probably thinking that this is American elitism at play, or that my palette isn’t sensitive enough to appreciate the tastes of English theater or some such crap. But I don’t think that’s the case. I love, and usually get, British humor. I think Eddie Izzard is a genius. I appreciate Monty Python, despite the fact that I’m not a 16-year-old boy wearing a fedora and a Hawaiian shirt. I get these things.

Instead, what I’m saying is, the British are too polite to give sincere reviews. This was the case we had when asking people about good restaurants in London. Everything was “quite nice.” And the same was true of theater reviews: everything was brilliant. And even as I looked at the audience, dropping like flies into unconsciousness, I wondered how many of them would leave the theater and tell their friends, “Yeah, it was brilliant.” Quite a few, I suspect.

As for me, I feel indebted to Rand and Ben for sitting through an hour and a half of excruciating “brilliance”. I promise to make it up to them. But this time, we’re going to see something here in the states. After all, we might not be perfect, but when we review something, we mean it.