I’m am licking some wounds.

Not literally, of course. Though I sometimes bite the sides of my fingers.

But my feelings have been hurt. I’ve been slighted by a few people in the “travel blogging industry.” I suppose it’s not a big deal, and I suppose it shouldn’t matter. Perhaps the funniest thing of all is that I didn’t really reach out to them. I was just kind of minding my own business and our paths crossed, and they made it clear: “You sit over there, little girl, while the big kids play over here.”

One woman was introduced to me by a mutual friend. The friend thought we’d have much to talk about, but her friend in turn said, in so many words: I am too busy to bother meeting with novices.

Another blogger got snippy with me. She made one of those dismissive comments that I usually get about my age – but now that I’m getting older, it was about something else – something so ridiculously personal, I don’t know what possessed her to write it. And it hurt me so profoundly that I’m still trying to figure out what to do about it. Besides unfollow her on Twitter, which I did immediately.

I’m trying to take it all in stride, because there are some brilliant, wonderful people out there. Like Trisha, over at Travel-Writers-Exchange.com. At first, I figured her comments and helpful tips were just a by-product of her being a brilliant networker. I mean, why would someone I didn’t know bother commenting on my blog? But she kept doing it, kept tweeting helpful blogging tips to me, kept being all around awesome to people who are trying to become fledgling writers. And it hit me that she wasn’t just networking or marketing –  she actually cares. (On a side note, if you are trying to break into travel blogging, I strongly suggest you follow Trisha on Twitter, at the very least).

Or Candice, whose blog and writing style are so near and dear to my heart that I actually get verklempt reading her About page. Because as she screams “Fuck professionalism” and vows to be herself and writes about “throwing up a little” in her mouth, I think to myself, “I need to get to hang out with this girl, because we’d become friends immediately.”

Or Naomi, who did become my friend immediately (or, at least, so I like to think) when I met her at a party at Rachel’s on New Year’s Eve. Naomi – if you are reading this, we should hang out, like, immediately. I will make orange chocolate cake and we can talk about the musical stylings of Eddie Murphy. Think about it.

Or Mike, whose comments (and site) consistently crack me up.

Seriously – when I get off my butt and update my blogroll, I won’t forget you ladies. And Mike.

And then there’s the countless other people who read my blog and support me: all my friends and loved ones, who keep coming back here and supporting me and leaving comments. There are actually too many of you to list. But I read your blogs and love when you link to me and find myself cheering you on as you build your daughter a grown-up bed or, hell, cook a piece of fish.

You are all awesome. And I need to keep in mind that the perpetrators of Dick Moves! can be counted on one hand, while the good people in my life are numerous and plentiful.

But I’m not just idly rambling. There’s a moral here, too: that you shouldn’t dismiss anyone. Whether it’s an over-eager fledgling blogger, or the person standing in front of you in line at security. Be polite and courteous to them, whoever them are. Not just because it’s the right and decent thing to do, but because if you don’t, it might come back and bite you in the ass. I once chatted with the girl who was checking us in to our flight, and later found that she was actually flying that day – and sitting one row in front of us. Had I been rude or dismissive, I’d have been horrified to have been in such close quarters with her. And I can’t tell you the number of times I’ve seen people brush off my husband, only to come back a few moments later, mortified that the kid with the torn jeans and the beard they just snubbed is actually someone worth knowing. 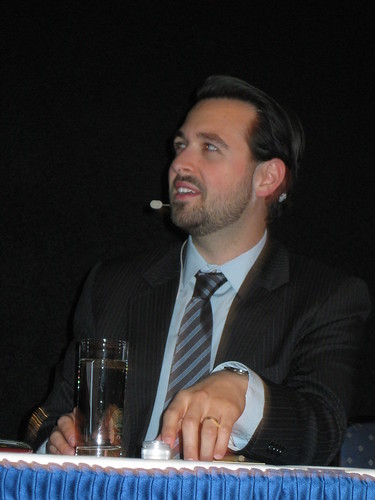 My hubby's so important, he gets to wear one of those cool microphone headset things.

But the point is, we’re all worth knowing.

So that’s something I’m going to keep in mind. Not just when traveling, but always. And if the slim chance occurs that someday some fledgling blogger sends me an email, asking for tips? First, I’ll question their sanity (“Seriously? You want to talk to me?), but after the initial shock wears off, I sure as hell won’t dismiss them.

Because whoever they are, they’re worth knowing, too.