I know, I know: you’re probably thinking that Threadless‘s star has waned from it’s glittering height of popularity several years ago (by the way – that, dear friends, is how you mix a metaphor). Gone too are the days when I could actually get away with wearing logo t-shirts without looking like I robbed a college student on laundry day. I’ve come to terms with the fact that, at the ripe old age of 29, I’m a good decade older than Urban Outfitters’ target demographic, and now appear to be the creepy old lady who is shopping there, you hope, for some younger relative’s birthday present and NOT herself.

But none of this changes the fact Threadless has some absolutely adorable t-shirts out there. And since they’re now not as en vogue as they were, say, 4 or 5 years ago, it is now officially cool to wear their clothing again. Hell, one could probably get away with wearing their tees even if she’s pushing 30 … or pulling 25, as it were.

So even those these aren’t technically travel items, they are tangentially related to travel. And let’s face it: so is my blog.

I particularly love the design that won their Threadless Loves Travel II design competition. It’s entitled Globetrotter, and it features a woman riding a HORSE THAT’S ACTUALLY A GLOBE.

As the kids would say, “ZOMG”. Which, I believe, is an expression of excitement. Either that, I just proposed to you in Klingon.

Oh, and then there’s this:

If there is a god (and if there is one, I’m pretty sure he lives in Italy), I would already own this. Hell, everyone in Italy should own this shirt. 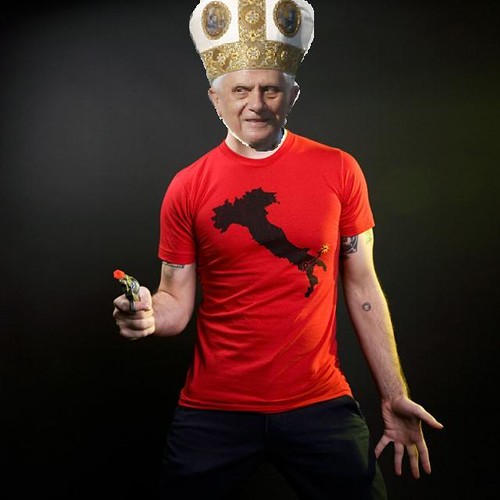 Yeah. Well, maybe not everyone. But still, it’s cute.