I was a smart-ass little kid. This should surprise no one. But in addition to having a smart-ass mouth (smart ass-mouth?), I was also pretty damn proficient when it came to school. And I remember it distinctly biting me in my smart little ass.

Sometime in the second grade, the kid sitting next to me was caught copying off my paper during a test. Rather than force him to move for his offense, our teacher instead made me move my desk, so no one else would be tempted to look at my paper. This would continue every time we took a test for the rest of the year. The cheater got to stay where he was, and I had to move.

I remember the shame of moving my desk, feeling like a criminal, and all the stares from the kids who passed by our classroom. They thought I was a cheater. I don’t even remember my teacher’s name, but I’ve never forgiven her for it. Her methods were asinine.

And for some reason, I’m reminded of that experience every single time I go through airport security.

And, while I realize this next statement is going to get me in some serious trouble, I figure I should say it anyway, because it’s my blog. But the thing is, I honestly feel that going through security is way worse for women than men.

I will now pause for a moment of freaking out on behalf our male readers. (Hi, guy(s)!).

Don’t get me wrong: going through security sucks for everyone. It does. It’s a broken system, and we’re all, in some sense, like the good, well-behaved kid who has to move their desk. Someone else broke the rules, and now we have to pay for it. We shove our toiletries into a quart bag, take off our shoes, and pray that we didn’t forget something in our bag. TSA security measures are based on faulty premises and are universally inconvenient. But I think if they were as inconvenient for men as they are for women, the rules would have already changed.

Take my husband for example. He’s a well-groomed individual. Hell, he just made it to this list, which means nothing, but nevertheless has made me very, very proud. And consequently, he probably has more health and man-beauty products than the average male. But that still isn’t a hell of a lot. Check out his 1-quart liquids bag that he takes with him on flights … 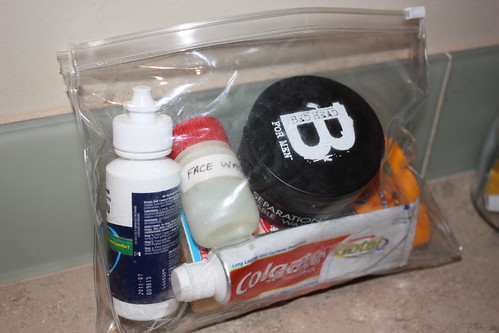 Absurdly minimalist, right? He has face wash, deodorant, contact lens solution, toothpaste, and hair product. They fit pretty easily into a one-quart bag, and honestly, most gentleman I know would probably only take two of those five items with them (I’ll let you pick which). I, on the other hand, find myself cramming my toiletries into my 1-quart bag, stretching both my Ziploc baggie and the laws of space-time to their limits. Don’t believe me? Here’s the counter of our hotel from our last road trip (i.e., no going through airport security), littered with my toiletries: 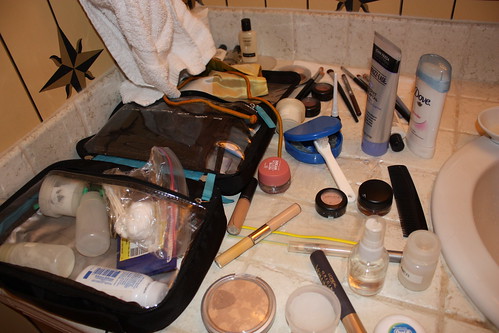 I just noticed you can see my birth control in this photo. Hi, mom!

I know, I know. You’re probably thinking: “Well, you don’t need to take those items. All you really need is toothpaste and deodorant. It’s just your own sexist beliefs that make you think you need make-up.”

But that’s bullshit, and you know it, hypothetical blog reader! Just because the cause of something is sexism, just because there are different standards for beauty for men and women, doesn’t mean those standards don’t exist. Yes, it might be sexist. So what? We still feel those pressures. And we still feel the need to wear make-up (some of us even enjoy it). And sometimes it’s more pertinent than ever to have those things with us when we go through airport security. Because when the world is going to hell, there’s something eternally comforting about a tube of lip gloss. That might be trite, but it’s true.

For those who would continue to argue that most beauty products are, in fact, frivolous, I hope most would agree that breast milk is not. But the TSA still gives lactating women a hard time when they try to get through security. A Chicago woman was told that any milk she pumped during the flight would be thrown out because it was a liquid. Which is barbarian, at best.

While I can’t really figure out TSAs motivations, I will say this: if dudes lactated, there is no way that the TSA would dare try to throw away breast milk. Seriously, imagine walking up to some 300-pound bruiser of a man and telling him that you were going to toss out his child’s food, food that he himself had made with his own body. You’d spend the next three days pulling your own teeth out of your ass.

Of course, I’ll be the first to admit that just crying sexism is lame and doesn’t really do anything. That if you are complacent in your own subjugation, you can’t really complain. You need to get off your ass and do something (like informing the masses about it on your “highly influential” blog – ahem – or signing petitions that aim to preserve your rights as a traveler). And I don’t think that there should be different TSA rules for men and women – I’m just trying to illustrate that for half of the population, the standards that have been established just don’t work. And that’s the fault of everyone – both men and women – who let this happen.

And I don’t mean to suggest, either, than the TSA is targeting just women. No. That would be foolish.

P.S. – For those that argue that inconvenience is what’s keeping us safe, I strongly suggest you read about how Israel keeps their airports running more efficiently and securely than ours. Thanks, Rand, for the amazing link.