If you are fortunate enough to catch the Glasgow City Bus tour without too much damage done to your person or your psyche, I strongly suggest hopping off at stop #16 for the Kelvingrove Art Museum. It’s fantabulous. And absolutely gorgeous. 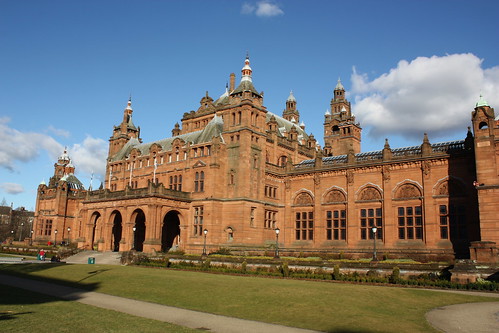 My first thought, while stepping inside, is that it’s one of the best family-oriented museums I’ve ever seen. And when I say family, I mean it – it’s not just a children’s museum, and it’s not just for adults, either. It’s geared at both, and it executes that balance rather brilliantly. My favorite example of this was two Monets hung about waist-high with a note that read: We’ve placed these paintings at a lower height so our younger patrons may enjoy them.

Don’t tell me that’s not awesome.

Oh, and did I mention that admission is free? Blissfully free. Though honestly, you’ll be so impressed with the place that you’ll probably end up leaving a hefty donation, as I did.

The museum is enormous and is a cross between an art and a natural history museum. I told Rand it was like the AMNH and The Met had a Scottish baby. There’s absolutely loads to see, but here were some of my favorite parts … 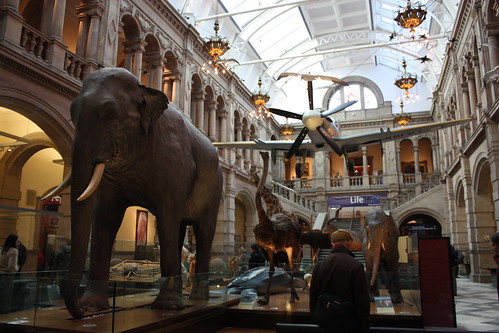 I love how much stuff was packed into this room.

Sir Roger was originally brought to Scotland around 1900 to be part of the Scottish Zoo. Presumably he had yet to be taxidermied. It’s a bit of a sad story, as Sir Roger became pretty pissed and aggressive in captivity (no shit. Scotland is cold), and had to be put down. His owner then sent him to the museum, where he’s resided ever since, surrounded by a menagerie of other random, taxidermied animals. As dark and sad as it is, it’s also kind of amazing, and reminiscent of a time when that sort of thing was commonplace.

Also, rather inexplicably, there’s a huge prop plane hanging from the ceiling just above : 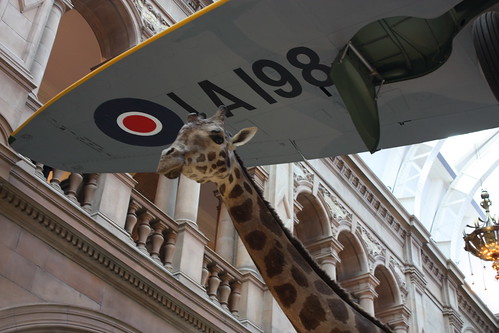 I'm sure this giraffe never would have imagined this as his final resting place. 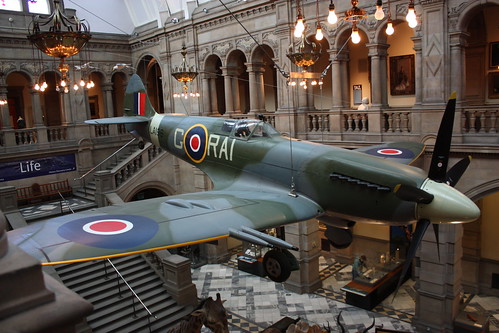 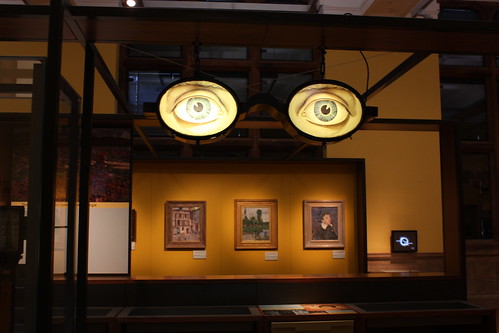 These weren’t so much an installation as part of an interactive display that aims to teach kids how to look at art. But they reminded me of the eyes on Dr. T.J. Eckelburg’s sign, so I took a picture of it, thinking Rand would love  it. And he did. Because he is a literary dork, and I will indulge that for as long as I live.

This installation made my jaw drop. If you consider that Scotland’s population is just over 5 million, it’s really humbling that they’ve got so many talented artists. I assume it’s all made possible through generous grants from wealthy benefactors. 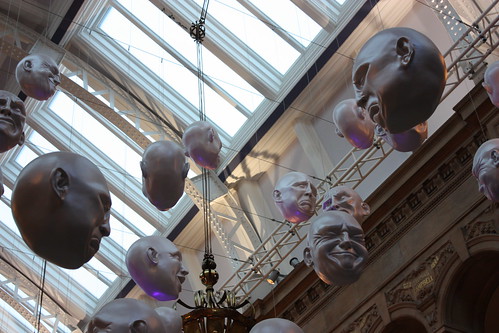 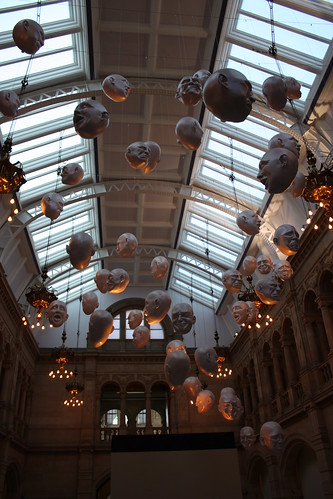 This title refers to the heartbreaking sculpture by Scottish artist George Lawson, of a widower holding his young daughter. It does not refer to the reason why the girl in the background was able to leave her house in the freezing cold with her stomach exposed. Although I suspect if her mother knew, she’d be pretty darn upset. 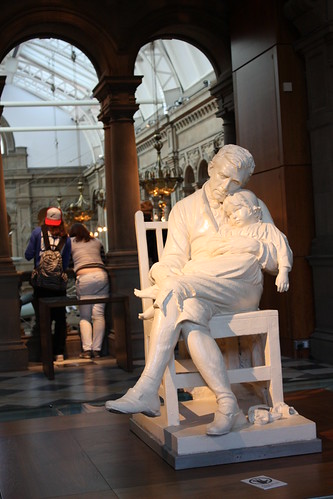 Entire exhibitions dedicated to The Highlander: 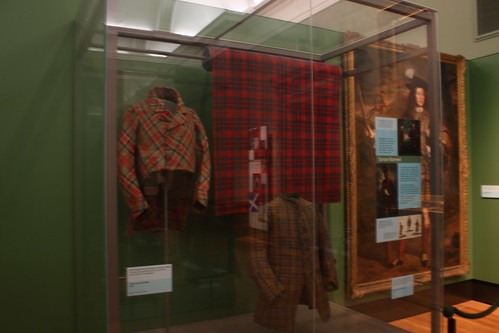 I think that Mario van Peebles wore the coat on the left. 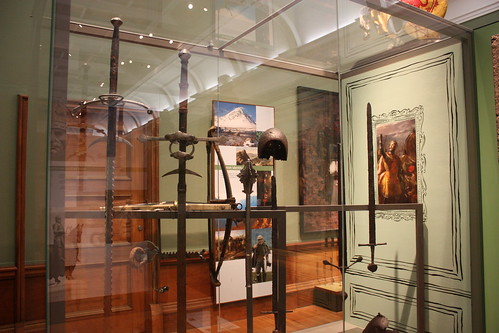 I'm pretty sure the painting at right is of Sean Connery. 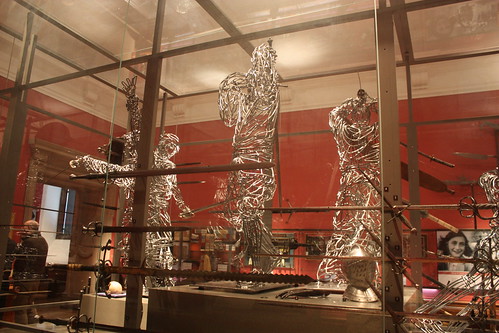 I just realized the plot of that movie is really dumb. Yeah. JUST realized it.

At least, that’s what I think they were about. There was lots of tartan and weapons and stuff. And I think there were portraits of Sean Connery. I might be misremembering a few things, but I doubt it. Also, I now have that song by Queen stuck in my head.

There’s loads more to see in the Kelvingrove Art Musuem than what I’ve covered here. Some amazing paintings by The Glasgow Boys (I didn’t take any pictures of these paintings, because that’s just not something I’m willing to do), and countless other artifacts and sculptures.

After spending a good chunk of time roaming around the museum, and not wanting to venture into their cafeteria (which was overrun by tiny Scottish children, all of whom sound like Sean Connery after he’s huffed some helium. One even tried to shoot at me, pretending his hand was a gun. The little shit.), I left in search of food.

I walked over to the next tour bus stop, and found a restaurant just adjacent: Konaki Greek Taverna. They had a few notes in the window, stating that they had been voted Glasgow’s best something or other, so I decided to stop in. The food was solid and inexpensive. Whenever I want comfort food in a foreign city, I notice I tend to go for Greek: it’s warm and familiar, and hummus is always hummus, no matter where you are in the world (usually).

I ended up getting the two course lunch special for 8 pounds. I got the hummus starter (of course) and a lamb souvlaki with rice and salad as an entree. It wasn’t mind-blowing or fantastic, but it was good, and came out to my table quickly, and the restaurant itself was clean and uncrowded. Really, it was all I could have asked for. 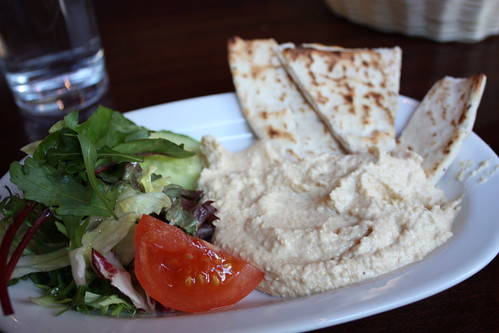 The pita bread served along side it had a slightly charred (but not unpleasant taste), a result, I think of being cooked on a grill. 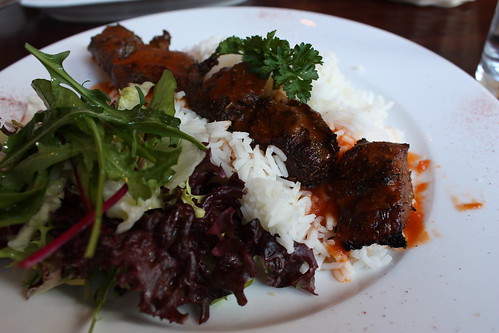 The meat was nicely spiced, and I'm glad I spent the extra pound to get lamb instead of beef or chicken.

There’s a few other restaurants and coffee shops in the area. I didn’t have time to pop into any of them, but I suspect that a lot of them might be decent. Despite being so close to the museum, the area didn’t strike me as terribly touristy. It’s definitely worth a visit (especially if you choose the convenience of the Glasgow bus tour to get you there). Just be prepared to spend a few hours roaming around, and, if you have time, it might help to know something of Scottish culture outside of what you’ve gathered from Fat Bastard and Scrooge McDuck.