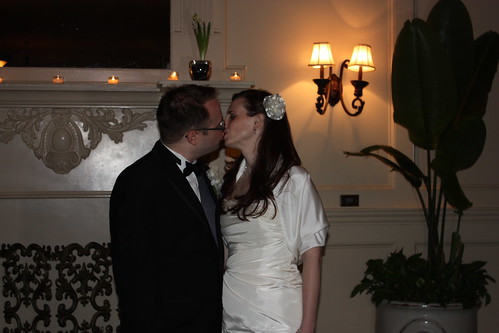 Hold on ... this seems like a good time to hit on the groom.

I’ve loads to tell you. I have a few more posts about Scotland I need to get out of my system, a couple on San Diego, and at least a half dozen on New Orleans (which might be one of my new favorite cities). Right now the trips are racking up faster than I can blog about them – and I’m well aware I shouldn’t complain. Blah, blah, blah, boo-hoo for me because my life is awesome.

But keep one thing in mind: I am a neurotic spazz. Several weeks ago, I had the sort of exchange with one of Rand’s colleagues that make you want to crawl into a cave, and never, ever come back. It was entirely unintentional, but without meaning to, I inadvertantly might have said that I presumed the guy didn’t wear the same size underwear as Rand, because he was clearly bigger than him.

I could explain more about the circumstances and the context, but really, I doubt it would make things better. I’m basing this on the fact that when I tried explaining myself in the moment, after having seen Rand et al’s faces, things only got worse.

“No, no, I just meant to say that you are longer than him … I MEAN TALLER! TALLER THAN HIM. Not longer. NO. Noooo … I don’t know how long you are.”

When I replay the scene in my head, it’s not unlike watching “Meet the Parents” – it would almost be funny if it weren’t quite so excruciating. The sort of thing that makes you cringe and squeeze your eyes shut. Where you just want to scream, “No, no, no!” in order to get yourself to stop talking.

That sort of thing happens to me all the time.

Most recently, it happened on the night of my friends’ wedding in New Orleans. By the end of the night, I desperately wanted a cave in which to hide. Don’t get me wrong, the wedding was lovely, the food was exquisite, the bride and groom glowing, the company delightful (and consisting of many of our friends). The groom’s nearly-90 grandfather was there, and a few of us went to say hello to him.

He was a delightful old flirt, and hugged and planted kisses on the many girls, and the one he gave to me happened to land on my neck.

I was telling the groom about it later, while we were all having drinks in the hotel bar after the wedding.

“Your grandfather was adorable,” I said, tilting my head, and patting my neck. “Kissed me on my neck.”

At this the groom look mortified, which I thought was funny, because the old man was adorable and hadn’t offended me at all.

“Uh, isn’t that something your husband should do?” he asked.

I stared at him for a moment, surprised at his reaction. I figured he’d had found the whole thing funny.

“Shouldn’t your husband be doing that, and not me?”

“Wait … DID YOU THINK I WAS TELLING YOU TO KISS ME ON THE NECK?”

“NO! I was saying your grandfather was adorable…. kissed me on the neck.” I said, trying to use the same cadence I did the first time, in an attempt to understand what where the confusion started.

“Yeah – you just said it again. It sounds like you said, ‘Kiss me on the neck.'”

“NO! I said your grandfather was adorable … kissed me on the neck!”

“There. You just said it again.”

I’m not sure what was more mortifying: that the groom thought I was asking him to kiss me on my neck moments after I had seen him get married (with my husband at my side), and that everyone around said that’s what it had sounded like – or that no one thought, “Well, that couldn’t have been what she said.”

Sigh. Clearly I’m not ready to mingle with mainstream society, much less travel the world without risking international incident. If you need me, I’ll be in my cave.