We asked some locals where we should head if we wanted a day trip out of Glasgow. We had heard that Loch Lomond was lovely (and the eponymous song kept playing in my head) but unfortunately the ferries that run along it’s bonny bonny banks wouldn’t begin operating until springtime. So we decided to go to Stirling Castle, which several people recommended (though they admitted it wasn’t as nice as Edinburgh Castle – but it was much, much closer, and visitable in a day).

We took the train there, which cost the equivalent of $12 (U.S.) each, and walked through the town and up the hill to Stirling Castle. 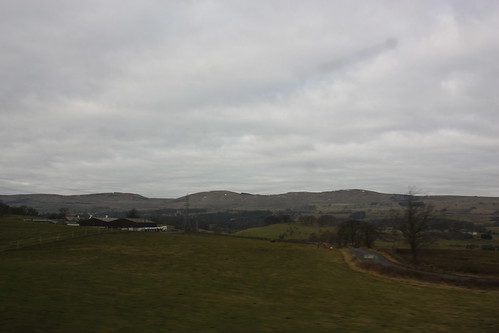 It really is lush and green - but the cloudiness doesn't really reflect that. 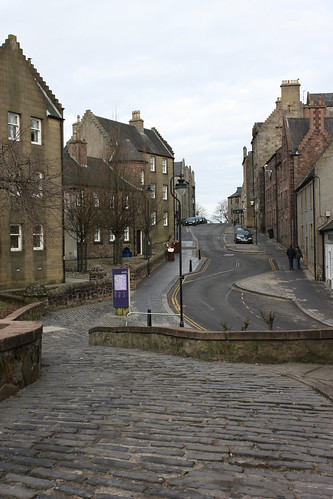 The town is really quite lovely. 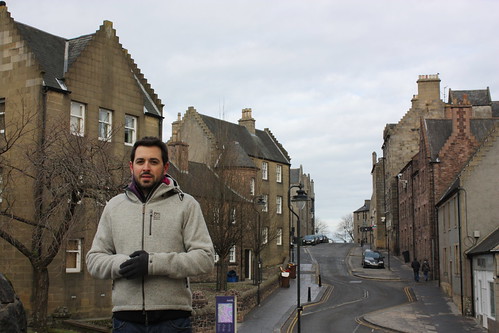 Oh, and did I mention it was friggin freezing? It was.

At the top of the hill you’ll find Stirling Castle and, across the way, an old cemetery. For the record, I love old cemeteries, and this was had the added bonus of reminding me a lot of the one where Bod grew up in Neil Gaiman’s The Graveyard Book (if you have not read it, do so immediately). 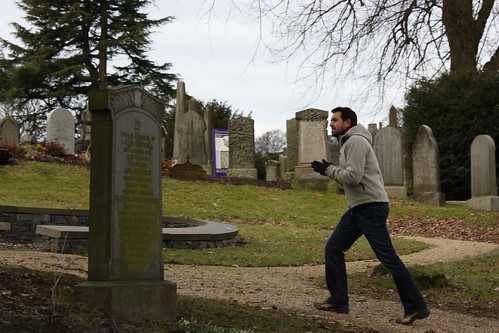 My husband, god bless him, is a good man. Despite the freezing cold he let me roam around the cemetery talking photos while he lost feeling in his fingers. 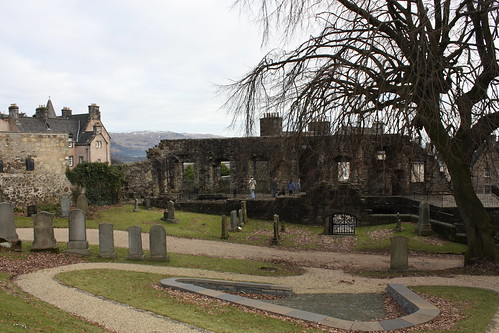 It reminded me of the cemetery outside the haunted mansion at Disneyland, only real. 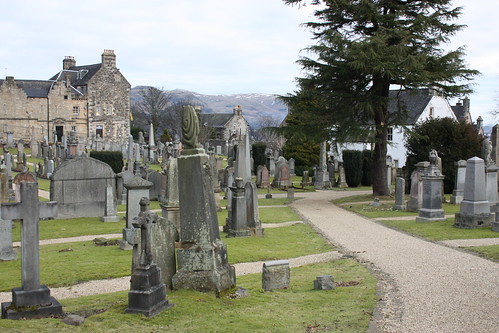 I would also like to take a moment to note, before going on to the next few photos, that something was seriously effed up with my hair on this day. I’m not really sure what was going on, but I had decided to pin my fringe back, and, since I had my hood up for most of the time (as it was freezing) the result was something like a shorter, lighter version of Snooki‘s hair from Jersey Shore. Behold: 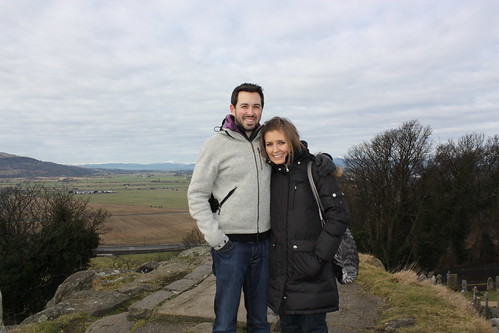 My hair got worse, but more on that later.

We then walked on to Stirling castle, and found that our timing had been perfect: we arrived just as a tour was starting with the most magical tour guide, ever. 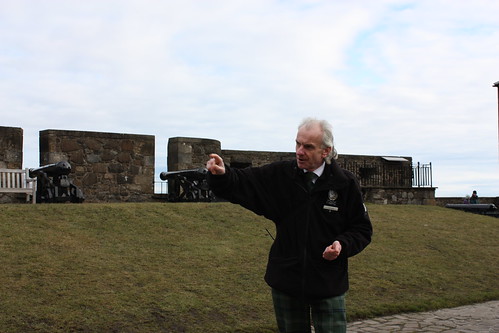 He had a mullet, tartan pants, AND an unintelligible accent. Rand spent the rest of the afternoon trying to imitate it. 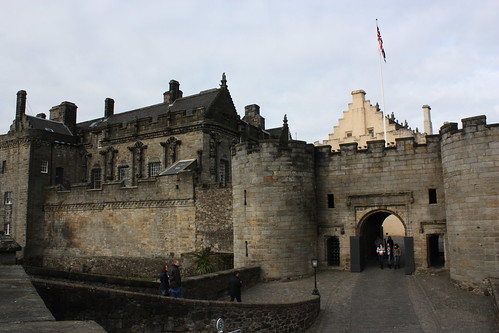 Stirling Castle has been through a lot: the first records of it are from 1100, and since then it’s seen the coronation of Scottish Kings and Queens, including Mary, Queen of Scots, and played a key role in the Scottish Wars of Independence. There have been over a dozen battles and sieges that took place at Stirling Castle, and the Battle of Stirling Bridge (where William Wallace defeated English troops in 1296) took place nearby. The English would eventually lay claim to the castle again, a fact that’s obviously a sore spot with the Scots – they prefer to talk about the battles they did win than those they lost. Which is pretty understandable.

By the time we were done with the tour (which leaves you feeling a little ticked off at the English, whether rightly so or not), the day had cleared a bit, and the views from the castle are gorgeous. 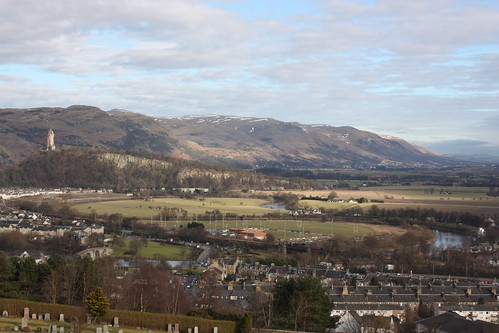 Don't let the sun fool you: it was still freezing. 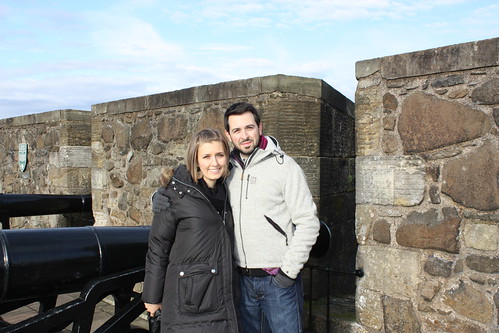 And my hair managed to be normal for at least one photo! Whoo-hoo!

We also walked around the gift ship and a few other little museums around the castle. We saw this portrait, which had me in absolute stitches: 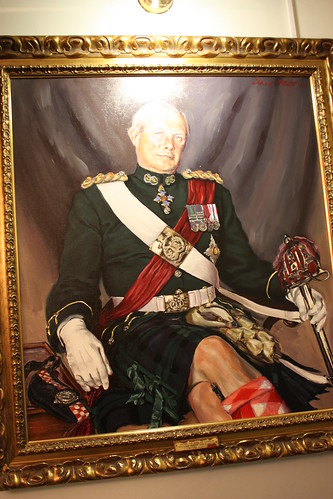 He looks so dashing, but his knees are so damn dainty. I absolutely died.

And this, which I really should have bought. I mean, I joke around that Sean Connery is a Scottish national hero, but to have it actually be true? Delightful. 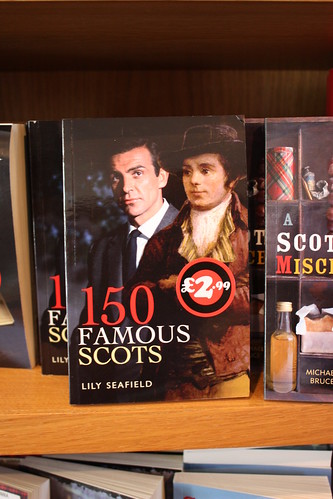 He's sharing a cover with Robbie Burns. I think I need a minute.

After all our milling about, we were sort of dying of hunger, so we stopped by the cafe near Stirling Castle. While the food is nothing to blog home about (and yet here I am), it was cheap and fast. The desserts were fantastic sugar-laden confections, and the pies weren’t too bad. Plus, the cafe has air vents in the floor that shoot up at you, so you feel a little bit like a super model while you are eating lunch: 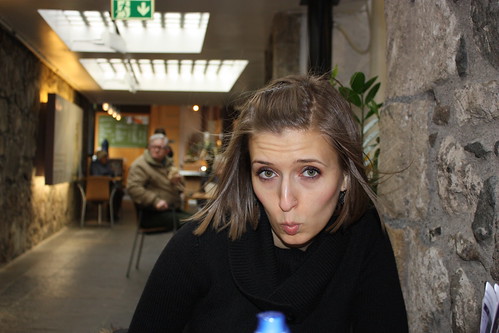 I attempt to do "Blue Steel". Best leave this sort of thing to the professionals. 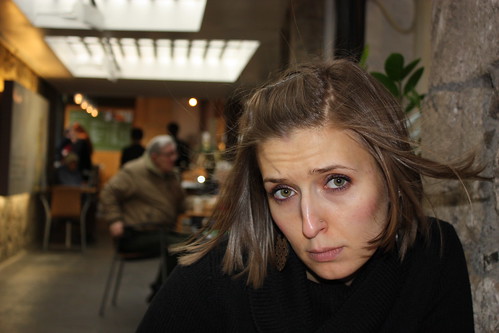 All in all, a great day trip. I highly recommend putting on some warm clothes and comfortable shoes and visiting Stirling Castle. Unless you are starving, though, I’d skip the cafe. Because while affordable and convenient, any meal that starts with $5 pies will end with this: 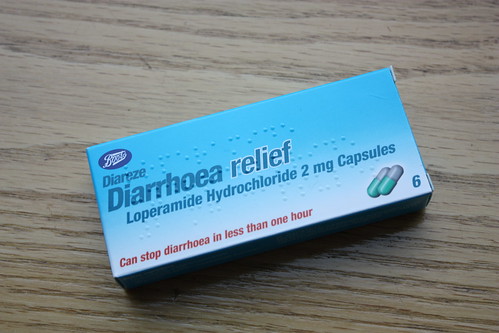 I will spare you the mortifying exchange I had with the pharmacist while purchasing these.

But more on that (and our trip to Wallace Monument, just across the way from Stirling Castle) later.