I’m not still writing about Scotland, am I? Have three days in a country ever been stretched into so many blog posts? Hemingway rambled less about Spain, I’m sure.

I hope you aren’t getting bored. Because Scotland really is a magical land. Even though my husband had to remind me repeatedly that Leprechauns are not, in fact, from Scotland, it’s still a fairly amazing place. But I’ve been blathering on about it for quite a while now, so consider this my last Scotland post. Really, I promise. My blog is currently three trips behind my travel schedule, so I really will make good on this.

Besides, what better way to close on Scotland than to tell you about William Wallace?

The Scots go ape-shit over Wallace, and it’s easy to see why: both a hero and a hottie, he reminds us of a simpler time when Mel Gibson wasn’t just some crazy anti-Semitic douche, but a dude with talent and a killer smile. Wallace Monument, erected in 1869 (tee-hee!), was built to honor him, and to torment visitors who already aren’t feeling top-notch.

Just to remind you (in case, you know, the endless ramblings are hard to keep up with), we decided to go to Wallace Monument on the same day that we visited Stirling Castle, since the two are very close to one another. This meant all of the following:

We walked back down from the castle, through the town of Stirling, to the train station, and found that there we could catch a bus to Wallace Monument. The bus ride would give us a great view of Stirling Bridge, where the eponymous battle had taken place: 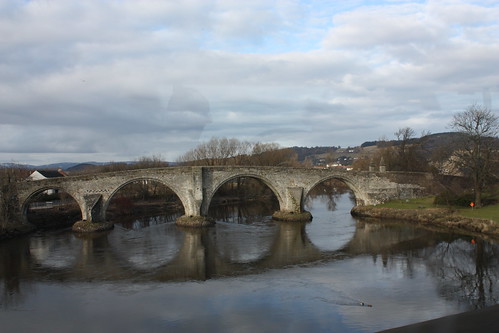 Apparently a LOT of British soldiers fell to their deaths here, sinking in their armor in the frigid water.

We quietly hoped that in our enfeebled state all we would have to do see Wallace Monument would be to step off the bus.

But damn it, no. That’s never how these things work out. Even though the bus deposits you very close to the Wallace Monument, it’s still quite a trek to the top. 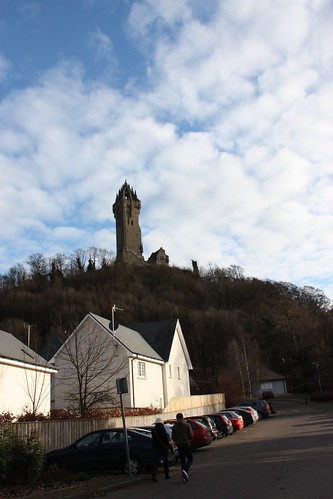 It's gonna be a hike.

That’s not to say it isn’t worth it, or that it isn’t fun: I just don’t recommend going when you’re fighting on minor food poisoning, and your husband has been combatting a cold that has been with him since 2009. But the views are pretty spectacular, even before you get to the top of the monument. 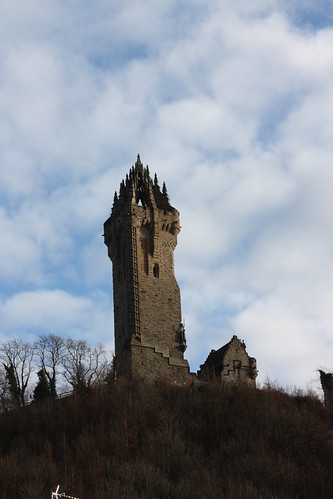 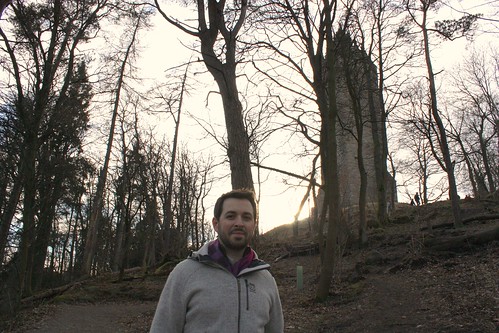 Moments later, he would hack up a lung. 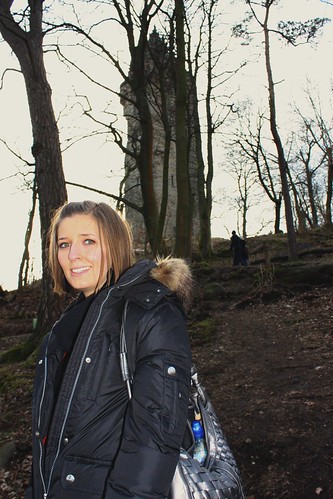 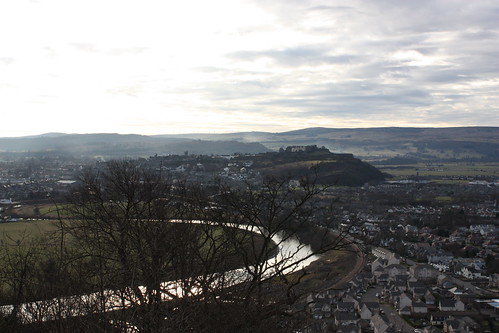 The view from the base of the Wallace Monument. On top of the hill towards the right, you can see Stirling Castle.

The hike from the bottom of the hill to the base of the monument actually only takes about 10 minutes. There’s also a shuttle that will take you up, but everyone in line for it was either carrying a child, or was older than my parents, and we couldn’t in good conscience take it, being young and somewhat healthy. However, had we known that tower has 200+ stairs, tightly woven in a spiral that would make anyone dizzy, we might have opted for the shuttle after all. 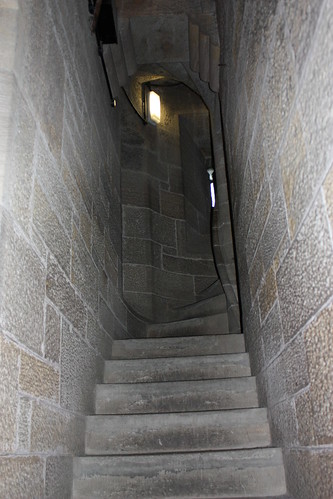 Fortunately, it’s not a straight shot up to the top of the monument. There are several floors on which you can sit, look around, and force back down the remains of the Unicorn Cafe special. They even have Wallace’s sword on display, the size of which has people estimating that the man must have been well over 6′ to have carried it. Which makes Mel Gibson portraying him seem even more ridiculous. 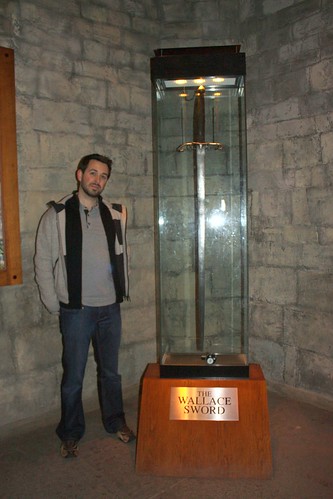 My husband (who is nearly the same height as Mel Gibson) and the Wallace Sword. 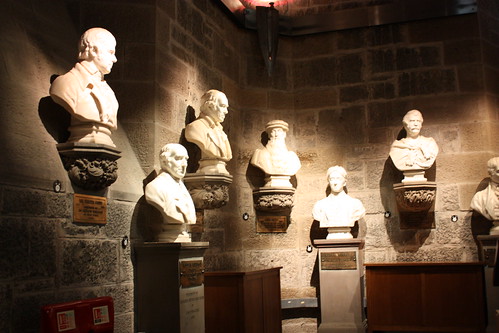 The hall of Scottish heroes, which sadly did NOT include a bust of Sean Connery. 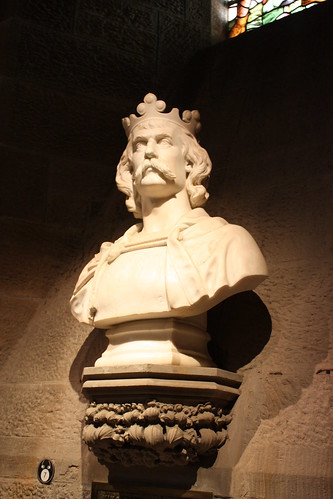 Rand and I nearly didn’t make it to the top. We were both feeling sick, and the winding of the staircase was NOT helping. We considered stopping each time we hit a landing, since we had no way of knowing how much further it was to the top. I’m sure if we had been feeling better it wouldn’t have been an issue. In the end, we did make it to the top of the monument, and the views were lovely … 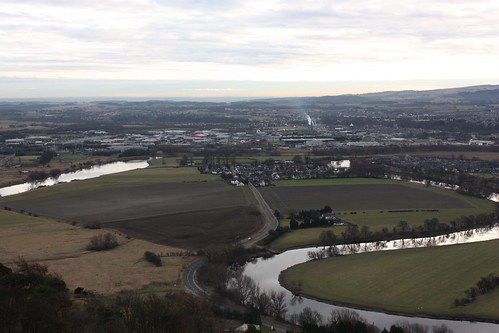 View from the top of the Wallace Monument. 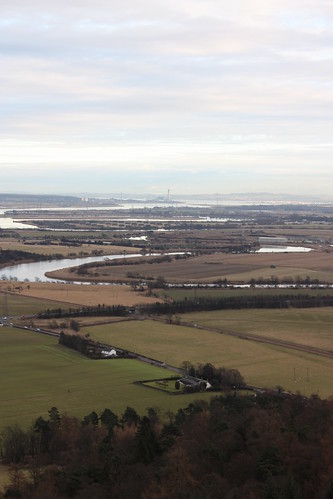 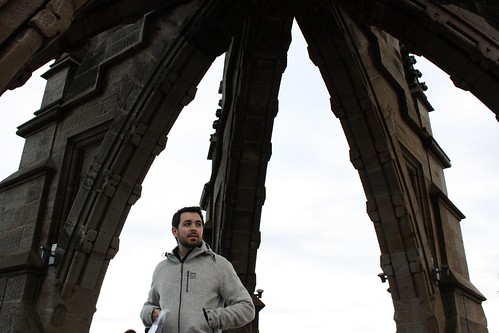 Did I mention it was freezing? IT WAS FREEZING. 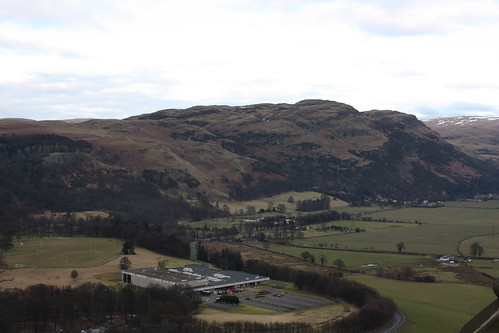 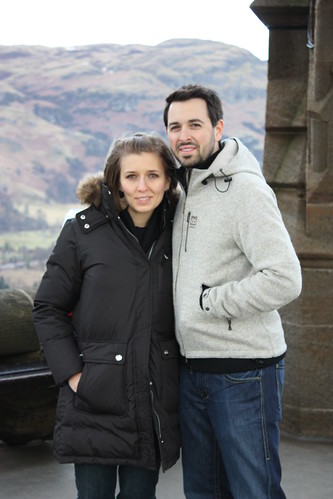 I look weird in this photo, but considering I was either going to barf or poop my pants, and Rand had consumption, I say it's pretty cute.

We headed back down the monument stairs, and walked down the hill, once again forgoing the shuttle. The bus ran every half hour from the bottom of the hill, so we found ourselves huddled together for warmth, awaiting the bus, which was 20 minutes away. On the ride back, feverish and dizzy, I got to thinking about how revered William Wallace is in Scotland. Something of a cross between Nathan Hale and Indiana Jones. Which made seeing this on the busride back to Stirling even more strange: 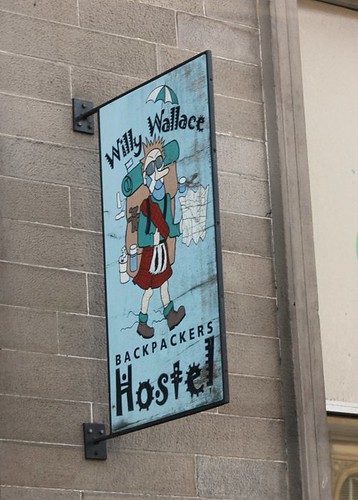 Just for the record, the place is called Willy Wallace Backpackers Hostel.

And that was our trip to Wallace Monument.