I can’t take his money … I can’t print my own money … I have to work for money … Why don’t I just lay down and die? — Homer Simpson, The Simpsons
– 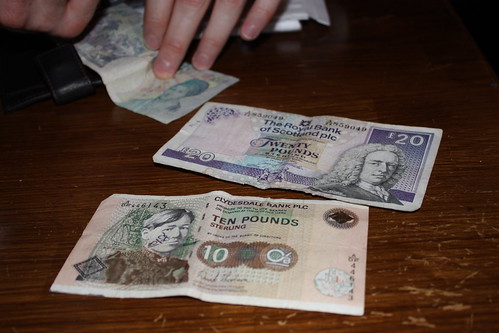 During our trip to Scotland, we were made aware (by some proud Scots) of the fact that the country prints its own currency. In fact, three major banks in Scotland all print bills: The Clydesdale Bank, The Royal Bank of Scotland, and the Bank of Scotland (un-Royal). For all intents and purposes, the Scottish bills should have the same value (and exchange rate) as the English pound-notes that are also accepted throughout Scotland.

I say should, because in practice things tend to be a bit different.

One of our Scottish hosts proudly displayed some bills to us (the source of the pride being that the bills were Scottish), explaining that on more than one occasion proprietors in England had attempted to refuse the currency.

Don’t let world spread about this, because there is no way that the red states would accept a Californey quarter if they thought they had a choice.

But let’s get down to what the heck is going on with Scotland and the U.K., shall we? I found the whole thing incredibly confusing, and when you find that Wikipedia is the best source on the subject, it’s time to curl up in a ball and admit that the whole thing is effed up.

Here’s my understanding of it. If anyone knows any more about the issue, please feel free to jump in. Let’s start with legal tender.

To quote Rand, “legal tender is not what you think it is.” Personally, I had thought that legal tender was, well, legal money. As long as you didn’t print it in your basement, and ol’ George doesn’t have the gout, I figured it was legal tender. Apparently, this isn’t the case.

In fact, legal tender actually has a very narrow definition that pertains to the settlement of debts. It is an offered payment that cannot be legally refused in the settlement of a debt. It really has very little do with whether or not a form of payment is against the law or not (for example, debit cards, credit cards, and personal checks are widely accepted everywhere, but according to this definition, they are not legal tender).

Scottish notes are also not considered legal tender anywhere in the U.K. Not even in Scotland. So they can’t be used to repay debts, apparently, but instead function more as a promissory note (i.e., I am giving you this bill, which has the value of 5 pounds sterling, or whatever). In fact, no banknotes (not even those from the Bank of England) are accepted as legal tender in Scotland. Which I imagine would make it very hard to repay a debt.

But just because the Scottish bills aren’t legal tender doesn’t mean they aren’t legal. The banks in Scotland that print their own notes  have the right to do so as dictated by Parliament. The money is legal – and while technically people can refuse it in payment of a debt, most don’t.

Here’s where it gets tricky: if you are buying something in the U.K., the store must accept Scottish bills as payment. But if you have already received services from an establishment (as in, they served you a meal or gave you a cab ride) and you are in debt to them, they can then refuse Scottish bills, as they are not legal tender.

Sounds ridiculous, right? But according to one of our Scottish hosts, this has happened to him, and he basically told the waitstaff that it was either Scottish money or they weren’t getting paid at all, and they eventually caved and took the bill. He said that he had encountered the same thing with cabbies.

When we got to London, Rand asked a cab driver if he would accept Scottish currency. He said that generally he would, but some drivers wouldn’t on the grounds that their other passengers wouldn’t accept it back in the form of change. So while they recognized it’s value, it still created problems.

Sigh. The worst part, though, was that we found that internationally some currency exchange places will give you a different (worse) rate for Scottish bills than for English ones.  The matter has understandably upset a lot of Scottish tourists overseas.

Bottom line? Scotland’s money has the same value as British money. It just isn’t always easy to convince people of it.