Today’s post finds our author wandering off on a tangent …

I always wonder how much I should post about other people’s weddings. I started The Everywhereist long after my own wedding, so it wasn’t an issue to write about or cover my own. I even asked guests at my wedding to not blog or tweet about it (mostly, this was because Rand invited a lot of his industry friends, and I didn’t want to deal with the Twitterverse trashing on the two of us in reply to our friends’ tweets. Believe it or not, this happens often. Fortunately, I’m becoming quite awesome at ignoring it). Of course, I was shocked when people outside the industry avoided blogging about it as well. It kind of made me feel like a heel. So perhaps I shouldn’t have censored my guests. I don’t know.

And I don’t know whether or not I should write about other people’s nuptials. On the one hand, it seems that everyone will, at some point, take a trip in order to attend someone’s wedding, so it’s a very relevant subject to cover on a travel blog. On the other hand, it’s a deeply personal event and it makes sense that someone might not want it discussed in detail online.

But then again, I blogged about Rachel’s wedding in New Orleans just last week, and she seemed pretty okay with it. Maybe even happy.

I think the middle ground is to blog about a wedding, but only post unflattering or blurry photos of yourself as a guest. Yes. Yes, that is what I will do.

So, a few weeks ago Rand and I found ourselves in New Rochelle, NY, for our friend Eytan’s wedding. Eytan traveled to the absolute middle of nowhere for our wedding (in Ashland, Oregon), so a quick flight to Newark, then some aimless driving through Manhattan to just north of somewhere didn’t seem like that far to travel.

Besides, I love weddings. In a deranged, maniacal, OH-MY-GOD-I-LOVE-THIS-SONG-AND-LOOK-FREE-WINE-AND-CANAPES sort of way, I adore them. Especially weddings in which I am not the center-of-attention, and don’t have to try and soothe family members stricken by a sudden attack of crazy (a.k.a., I love weddings that are not my own).

But, holy cats, do I hate packing for weddings. Rand and I had a hell of a time – we didn’t want his tuxedo or my dress to get crushed, not to mention a hat he brought with him (that he occasionally wears with his tux. No, it’s not a top hat. Yes, he looks awesome in it.) But after we actually made it to the wedding in one piece (and found we were not, as we had originally thought, woefully late),  we had a terrific time.

The wedding was at a yacht club on the coast north of Manhattan. And while the day had been gray and windy (see the wicked storm we encountered the day before) it was still really a lovely setting. 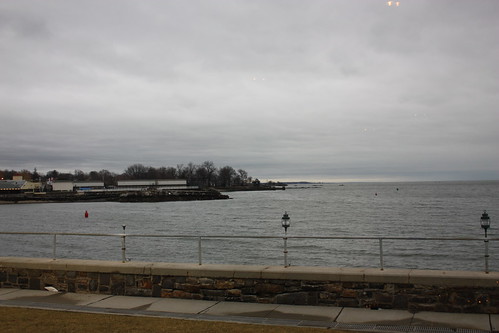 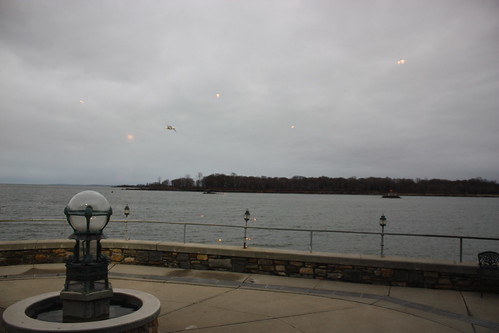 I can only imagine how nice it would be on a summer day. And while I would have loved to have been able to go outside, knowing my luck, I’d have been pooped on by a seagull. I just know it. It nearly happened to me yesterday, so imagine what fate would have had in store for me had I been all dressed up near the water … The gray skies were a blessing, I’m sure. A poop-free blessing.

Plus, I got to take a lot of photos of me all dressed up with my sweetie. 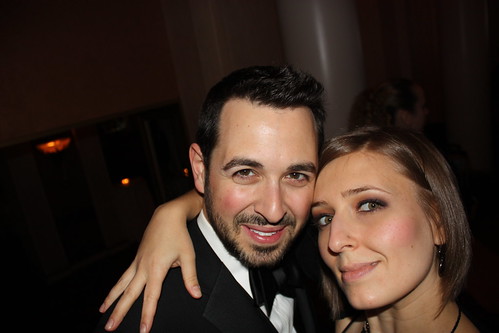 Note to self: start wearing lipstick, because Rand's lips are naturally way rosier than yours.

Some photos were better than others. But even the blurry ones proved to be awesome … 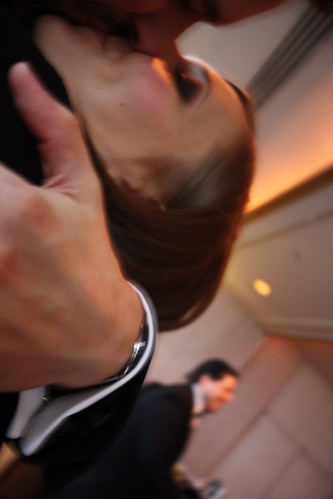 I actually don't know how he managed to take this photo ... his hands seemed otherwise occupied.

And I got a few pictures of Rand with our gorgeous friend, Jen, who also made the trip out for the wedding. If she wasn’t so damn awesome, I might be the weensiest bit jealous about Rand having his arm around her. 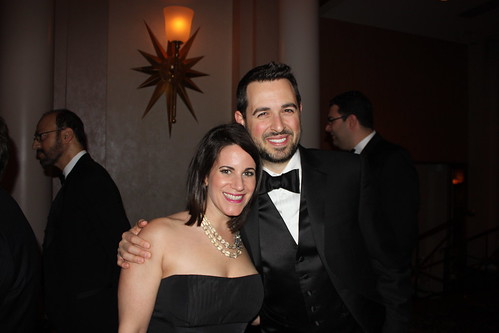 Of course, I got to sit next to someone pretty special at dinner, so it all evens out. Behold: 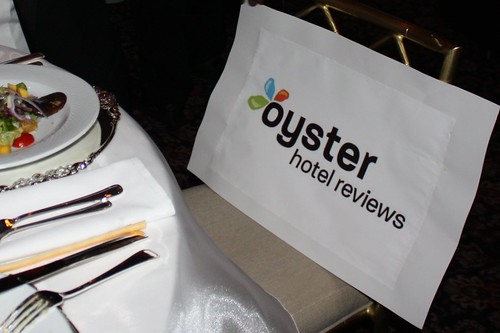 That's right: I got to sit next to an inanimate representation of Oyster.com. Jealous?

Of course, we barely got to see the bride and groom, as is usual at these sort of things. I’ve started to have a new philosophy about weddings – I adopted it around the time of my own. I just remind myself that weddings aren’t times when you actually get to spend quality time with the bride and groom. Instead, you go to be part of the memory – kind of like when you go see a movie with someone. Sure, you don’t talk or really see eachother  during the movie, but in the weeks and months afterward, you can talk about what happened – about the event you shared. And whenever that person thinks of that day, they’ll remember that you were a part of it.

I know it’s cheesy, but it sure beats the stress of anguish of looking at it any other way. Besides, amidst the crazy of a wedding, you might only get a quick glimpse of the bride and groom; a few moments of visiting them in passing. 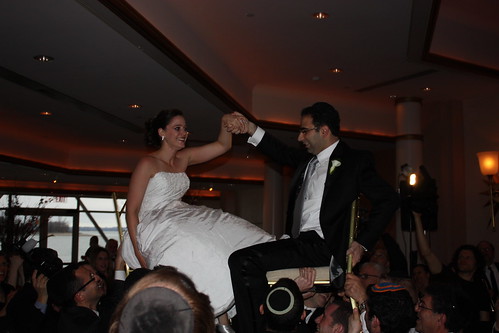