By now you’ve all heard about the volcano that erupted in Iceland, grounding thousands of planes across Europe, costing the airline industry millions of dollars, and dumping a copious quantity of incredibly fine ash across the continent. In other words: it’s made a pretty big name for itself, as far as volcanoes go.

If you have not heard about it, let me be first the welcome you to Earth. I assume you are here to take the Kardashians back to their home planet, and I’m more than okay with that. I never really accepted them as part of our species, anyway.

Also, seriously, how on (insert your planet here) were you able to avoid news coverage on this issue? It’s been covered in absolutely every paper and news outlet I can think of, despite the name of volcano itself being practically unpronounceable. NPR actually provides the correct pronunciation, which is actually worse that trying to spell it. Eyjafjallajokull. And just an FYI: in Icelandic, the double-l is actually pronounced as t-ll. That should clear things up, right?

My infant tongue can make of this name nothing longer or more explicit than Eye-uh-fyall, so we’ll just go with that.

Just last week I was quietly lamenting to my husband that it would be nice to visit Eye-uh-fyall, and our exchange shed some light on just how much of a space cadet I am.

Me: I’d really like to go see that volcano in Iceland.

Rand: You know we’ve been there, right?

Me: What the crap-hell are you talking about?

Rand: You remember the hike we went on in Iceland? We saw that glacier that was up on a mountain?

Me: Uh- huh … you mean that was the same place?

Folks, this is what happens when a geographic location’s name is completely unpronouncable to foreigners: they immediately forget the place entirely, even if it’s later thrust at them from every imaginable media source, ever.

Now, please don’t think I’m being completely ethnocentric and xenophobic. Truth be told, I think it’s kind of awesome that, as evolved and clever as we think we are (especially those of us who already speak more than one language), there are still words in the human language that utterly confound us. And try as we might, we won’t be able to say them, even though our 7-year-old nephew would have no problem doing so. It’s sort of humbling and wonderful.

I’m just picking on the Icelandic language because I can’t actually believe I didn’t make the connection on my own that we had visited the volcano last year. Of course, blame might be partially placed on the fact that I went to Iceland for the weekend, and was suffering from some wicked jet-lag. Nevertheless, it proved to be one of the most amazing trips I’ve been on.

As usual, we were invited to a foreign locale because some SEOs wanted my husband to speak at a conference. Our Icelandic hosts were exceptionally gracious, and in addition to feeding us some amazing meals, rich yogurty-desserts, and singing Icelandic folk songs, they took us on a glacier hike, courtesy of High North Iceland Tours.

Followers of the blog (hi to both of you!) know that I rarely call out a service or a tour by name (unless it’s food) but this one was totally worth it. The tour guides took us out in these enormous vehicles that are something akin to Range Rovers … on steroids. The tires on this thing were absolutely ginormous, and we had to stop and inflate or deflate them depending on the terrain … 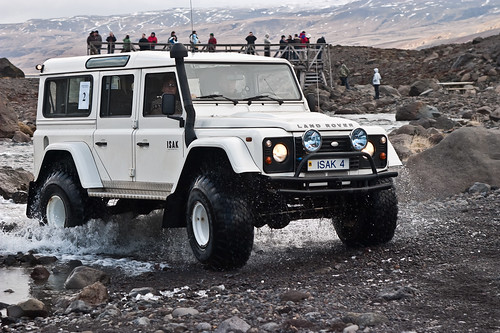 Take note of the bridge in the background

And believe me, this sort of vehicle was in no way excessive, especially given the terrain. 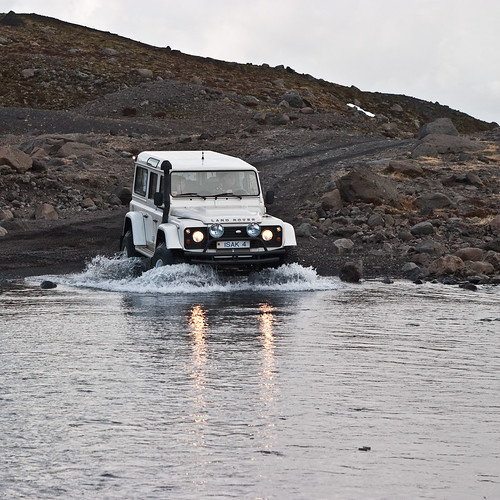 On more than one occasion, I looked at the road ahead of us, and quietly whispered to my husband that I was pretty sure this would be the end of us, and I loved him very much. This wasn’t the case, however, thanks to our driver, Halli, who was amazingly talented and somewhat insane. I say this with all due affection: 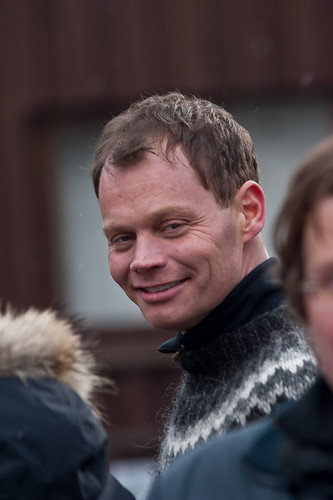 Rand was much calmer about the rough drive than I. I assume this was in part due to the fact that there are no open container laws in Iceland. 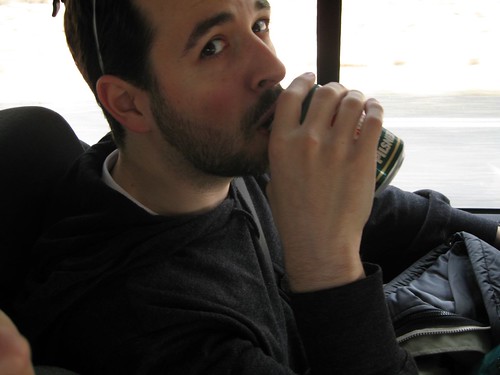 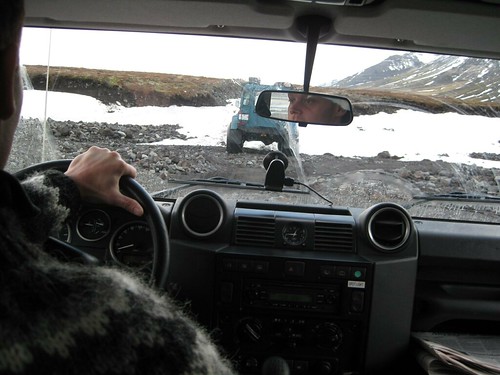 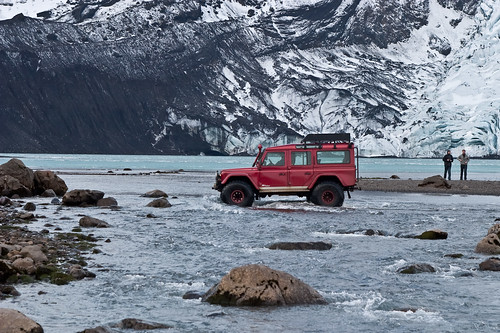 Just to give you an idea what we were up against.

… before we arrived at – drumroll, please – Eyjafjallajokull! 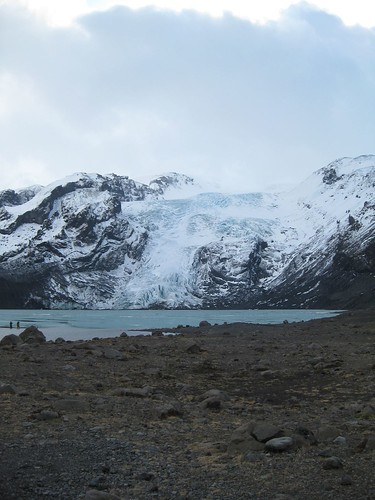 The ice underneath the snow was the color of mint gel toothpaste.

There was a glacier that cut right through the middle of it (it’s obviously gone now). The lake at the foot of the glacier was covered in ice … 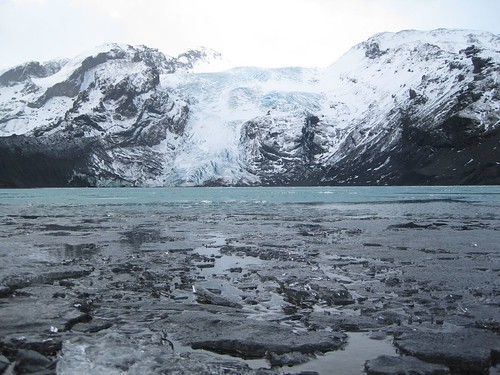 But it was really strange ice. It formed in a honeycomb pattern. It reminded us of Superman’s Fortress of Solitude. 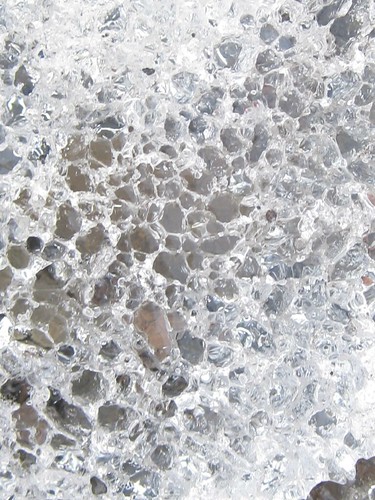 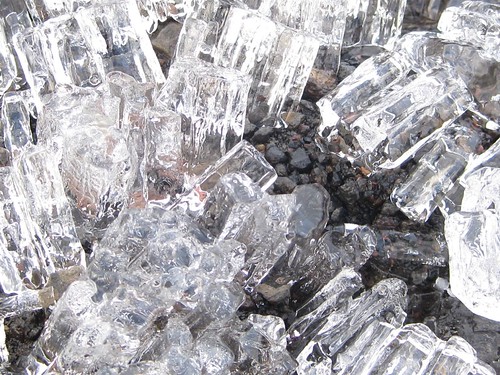 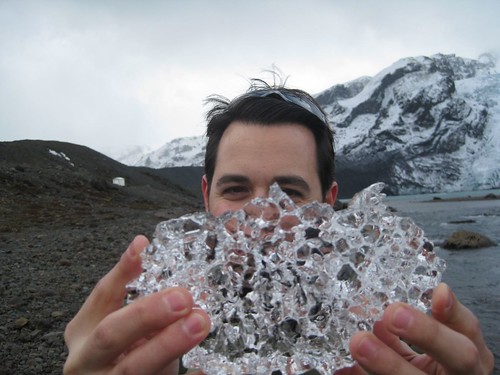 While we hiked up one of the mountains, our hosts set about adjusting the level of air in our tires (which marks the first time I’ve used that phrase without it being a euphemism!), and made us lunch. One of the coolest things ever is climb down a mountain, cold and tired, and be immediately handed a hamburger. Life is awesome.

So was the hike … It started out on a rickety old bridge that didn’t look like it could support all of us (but, of course, we climbed on it anyway). Recently, it was entirely wiped out by the lava flow, which makes me somewhat sad. 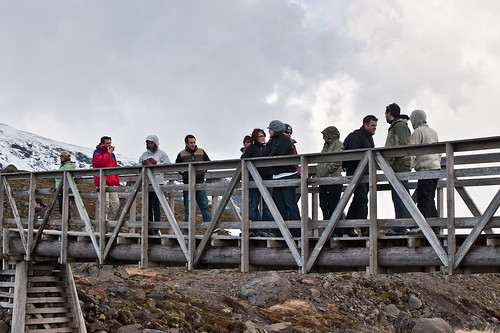 Though it was already bending under our weight, so it's not like it was sturdy. Just old.

It continued across volcanic rocks covered in snow. 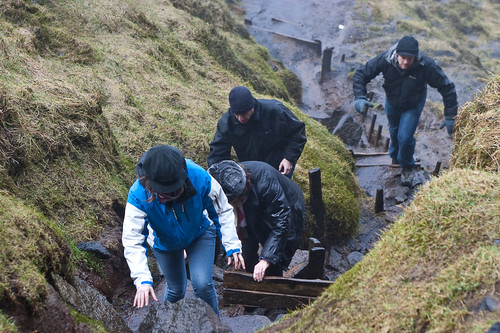 We spent a lot of time scampering over rocks like this. 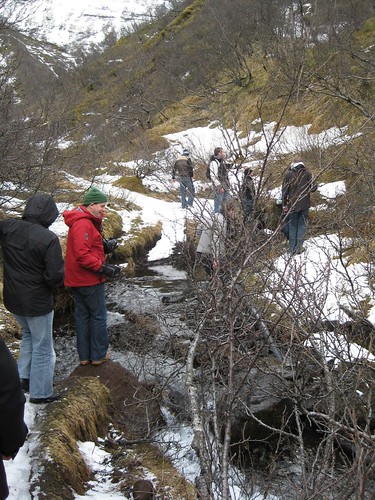 Don't worry, though - we all made it back safe and sound. Except for the dude we sacrificed to the trolls. Thanks for that, nameless SEO.

Until we made it back at the bottom. I think it’s a testament to our guides that at no point did any of this really feel even remotely dangerous. 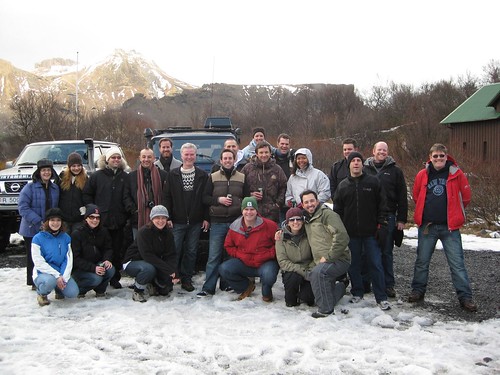 Ignore the fact that Rand and I are wearing matching coats. This was an unfortunate accident.

And celebrated with a bottle of Icelandic alcohol called Brennivin, also known as “the black death”. This is where my recollection of the trip starts to get a little hazy. I blame my failure to connect the current volcanic eruption to last year’s trip squarely on this bottle. 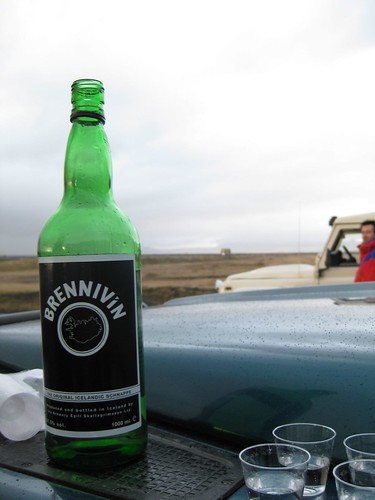 The perks of being half Russian? Despite my total lack of alcohol tolerance, I can down a shot of this and not flinch. 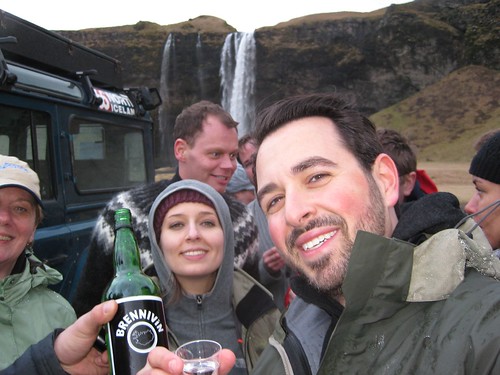 Rand had about 3 shots, so he's not really helpful in providing details about the rest of the trip.

There was a waterfall or something. 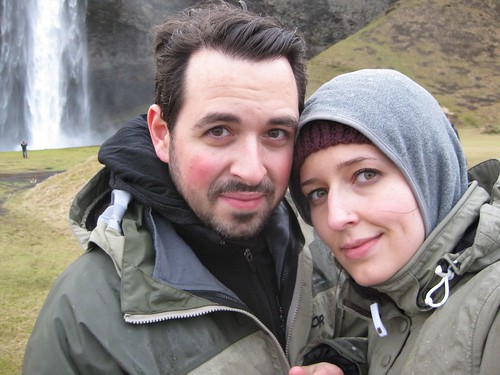 I don't even know where, exactly, this was.

All I really remember is being tipsy and happy, and thinking it was one of the most amazing trips I’ve ever taken … 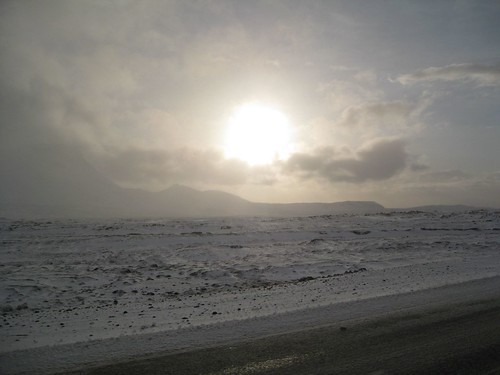 The view on the drive back from our trip.

I was telling Rand just yesterday how sad I was that, now that the volcano erupted, there would be no more tours like hours. He explained that while that was technically true (since most of the places we visited are now wiped out by lava), High North is still doing tours of Eyjafjallajokull. So while I’m not positive, I suspect that all those folks you see on the news, hiking on and around the volcano, are there because of the High North Tour Company. You can see the most recent photos from their volcano tours on their site.

Or you can just wait for this damn flying ban to lift, and go to Iceland to see for yourself. Despite the parts I’ve obviously forgotten, it definitely makes for an unforgettable trip.

P.S. – A big thanks to Oli, one of our Icelandic hosts, for taking fantastic pictures of the trip, some of which I used for this post. And for graciously deleting the photo of me taking a bite of a burger, a photo which he really shouldn’t have taken in the first place, because, seriously, who looks cute while eating?