A friend of my cousin’s once told me a story about something that happened to him while traveling. He had grown up in Switzerland when he was very young, moving to Italy when he was about 7 or 8. Later, he moved to the U.S., and he currently lives in Florida. Several years ago, he was traveling back to visit some family in Italy, and went through Newark, which is no doubt one of the larger and uglier airports in the U.S. And one that sees a lot of passengers.

While rushing to his gate, he ran smack dab into another traveller. While they stood, sorting things out, they realized that they knew eachother. They had gone to school together.

I suppose that sort of thing happens a lot, but it always makes my head spin. That you could bump into someone you know, far from home. I wish I could see all the decisions and occurences that lead up to two people arriving at the same place at the same time. Or see all the near-misses – the times we very nearly see someone, but don’t. It plays out like a movie in my head. I take a second too long picking out a shirt to wear, and enter the grocery store through one door, barely missing a friend who leaves out another one.

While at home, I suppose it’s not that big a deal. I swear I can’t swing a dead cat in the city of Seattle without bumping into someone I know. I’ll spare you the story of the time I called my doctor’s office, and described my symptoms to the receptionist, only to find it was my junior prom date. And, shall we say it was not the sort of illness you’d want someone to know about? Let’s just leave it at that.

But bumping into someone away from home seems far more special. I’m not a big believe in fate or anything of the sort – I figure that usually we see people we know on account of coincidence and a deal at Alaska Air. But that doesn’t make it any less wonderful in my mind. I still go absolutely bats when I unexpectedly see a friend. And yet it so rarely happens. Even given how much Rand and I fly, it’s a rarity.

And so, you can understand my absolutely freak out when Rand and I sat down on our flight to Newark a few weeks ago, and saw our friend Joel walk on board.

Joel and I used to work with eachother at Cranium. We sat at the same “pod” of desks when I first arrived, and I made tormenting him a pastime. He was one of the former-Craniacs who made the crazy drive down to Ashland for our wedding. And every few months he and a small group of my ex-co-workers get together for sushi and never fail to invite me, even though I can rarely make it. But they still invite me, anyway.

Joel, his adorable girlfriend, and his equally adorable cousin (seriously, these kids look like they’re genetically engineered in the back of an Urban Outfitters), were on their way to Hoboken to visit Joel’s brother, who just became a father, and to meet Joel’s new niece.

Rand and I were lucky enough to get upgraded to first class on our flight, which sadly meant that we sat no where near them. But just before take off, I got a text message from Joel that read, “Switch seats with me?”

And as silly as it sounds, knowing the three of them were several rows behind us (getting, as we would later find out, delightfully drunk) was really comforting. It was sort of like taking a field trip in elementary school. Even if you don’t get to sit next to all your friends on the bus, it’s nice to know they aren’t too far away.

It’s the sort of thing that makes you consider all the little decisions, all the things that had to happen for the five of you to bump into one another. It reminds you of how lucky you are to have such cool friends in your hometown in the first place.

And that you really should try to make it to the next sushi night. 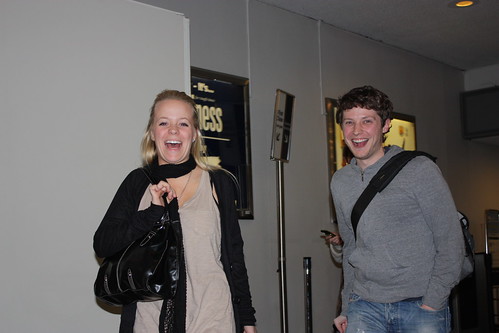 We waited for them at the gate in Newark. This was their reaction. Adorable, right?