Convinced I haven’t alienated all of my god-fearing readers with this post, I’ve decided to run the rest off by writing about my visit to The Cathedral of St. John the Divine on New York’s Upper West Side.

Prior to visiting the cathedral, my only familiarity with St. John the Divine was as the preferred name of a flamboyant gay man I once met.

The truth is, despite being an accused heathen and confirmed heretic, I quite enjoy churches. I think they are often pretty and serene, and if I’m able to ignore the unpleasantries that come to mind upon hearing the term “organized religion”, I tend to have a good time. Our visit to St. John’s Cathedral was no exception.

It helped that it was a beautiful day. I suppose I have god to thank for that, but really, who’s keeping track? 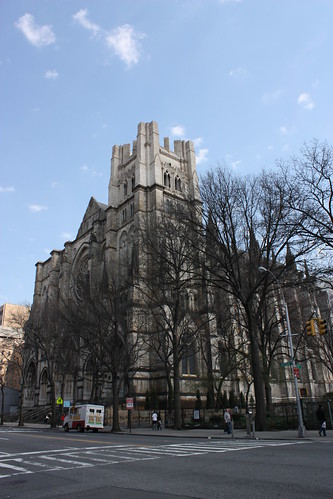 Mmm ... the sunshine felt like the heat of hell brought to earth! (Just kidding ... it was probably only 65). 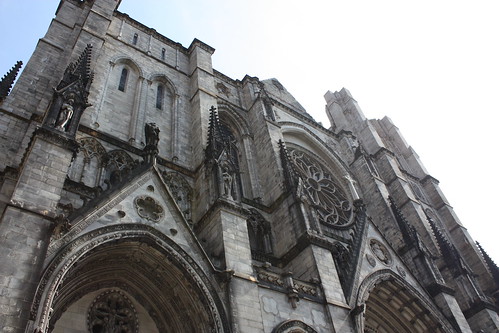 The cathedral is huge, so it's actually impossible to get a full-shot of it from a lot of angles. (That's what she said!)

Being a good, observant Jew, my husband can’t actually enter the threshold of a church without his skin burning. But doesn’t he look dashing standing just outside? 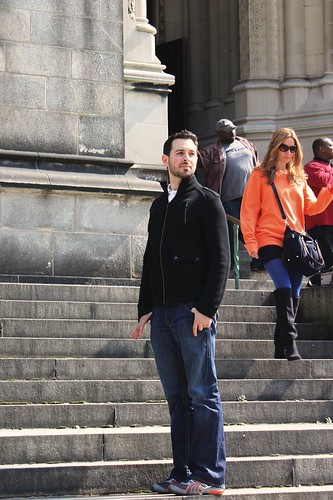 Also, I'm pretty sure that's J-Lo in the background.

I kid, of course. My husband’s not actually observant. He eats pork. It’s one of his best qualities.

Besides, it’s an Episcopal church. I’m pretty sure he’s allowed in those. I recently met two Episcopalians while waiting in line for food at a Disney park a few weeks ago. They were from near St. Paul, and they described their religion as being (in thick Minnesotan accents) ” the Lazy-man’s Catholic.”

The inside of the cathedral is beautiful. 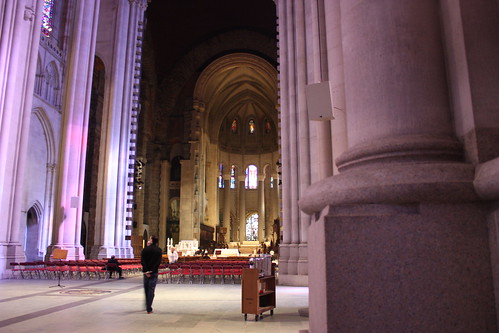 I suppose that compared to the sort of churches you’d see in Europe, it’s not all that impressive. But it really is amazing to see something like this in the U.S. It’s apparently a good example of Gothic Revival (which, I learned, has nothing to do with kids wearing dark eyeliner and corsets). 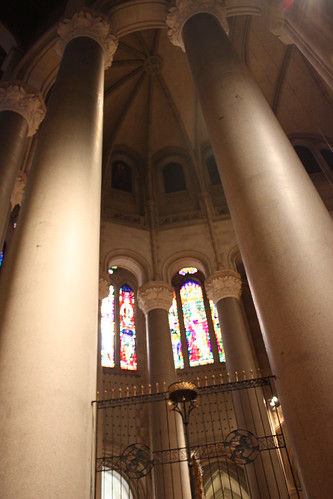 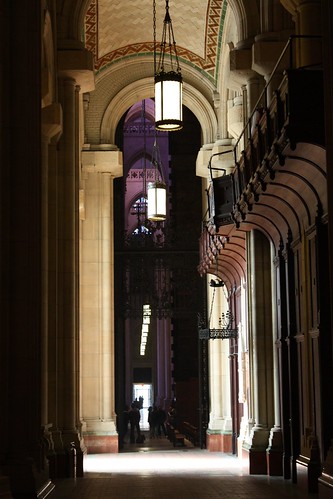 “That’s what happens when you kiss a Jew inside of a church,” Rand explained. Don’t say my blog never taught you anything. 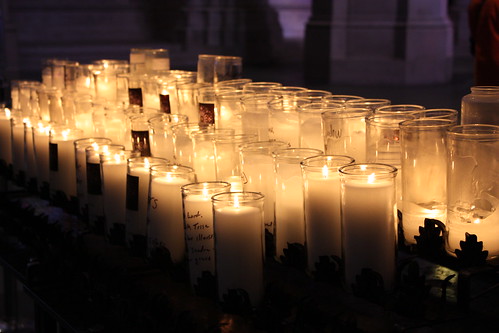 I felt a little invasive taking photos of these, but no one was around, and they were so lovely.

After a  few minutes inside the church, you begin to forget that you’re actually in Manhattan. This doesn’t necessarily go away when you step back outside. The Upper West Side is, to me at least, incredibly sleepy when compared to the rest of the island. And the church’s expansive Biblical Garden, located adjacent to the Cathedral, just isn’t the sort of green patch one is used to seeing in New York (outside of Central Park). 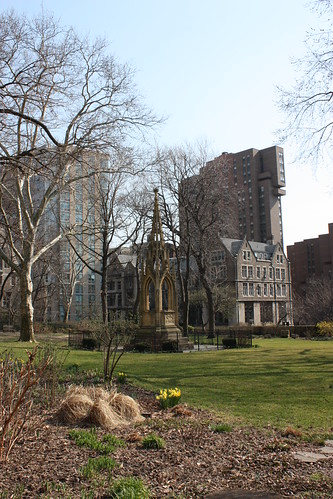 Okay, fine, so it isn’t that miraculous when compared to the park. But does Central Park have peacocks? I THINK NOT. 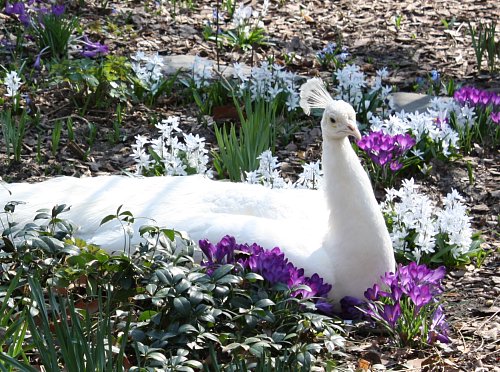 She looks stuck-up, right? The pretty ones always are.

Also located in the Biblical Gardens is The Peace Fountain, a sculpture by artist Greg Wyatt. I assume it’s a fountain, too, but it currently had no water running through it. It depicts the struggle between good and evil, embodied in the figure of Archangel Michael battling (and, in this instance, beheading) Satan. It’s actually kind of a gory scene. The sculpture also includes the smiling faces of an anthropomorphic sun and moon, as well as several animals (a lion and a lamb laying down together, as well as numerous … giraffes? WTF.). The overall look is almost … pagan. Surrounding the statue are plaques with quotes from notable-but-definitely-not-Christian peace-mongers: John Lennon, Gandhi, Einstein, and Socrates, among others. 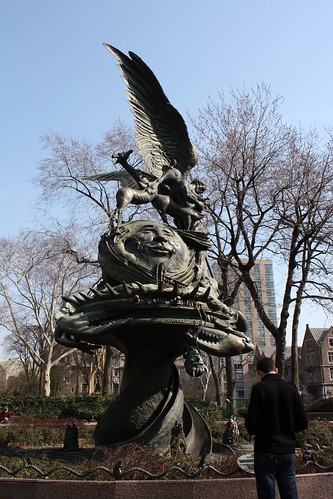 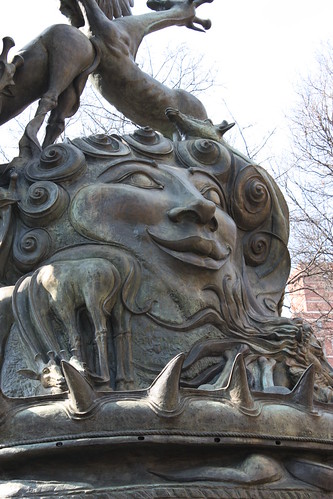 The statue is supposedly controversial, though I had trouble finding any articles on that point (though this NYT piece lightly touches on the issue). I can imagine there’s a few reasons why it would ruffle a few feathers, though: the violent depiction of the battle between good and evil, the personification of celestial bodies, the paganistic depiction of animals, and the quotes from non-Christians (also, how can it be a fountain if there’s no water?). But if you ask me, the real controversial element of the sculpture lies around its border. Local schoolchildren were asked to sculpt tiny animals to be perched around the fountain’s rim, creating a sort of miniature Noah’s ark. The result is, in some cases, truly adorable: 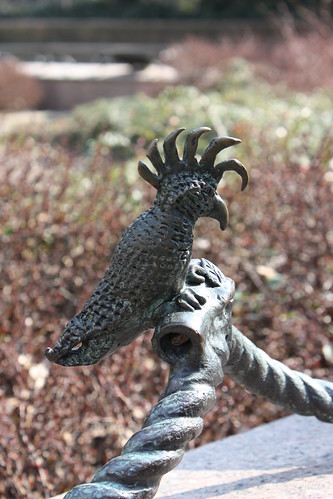 But in other cases? No. Just … NO. You want to talk controversy? Calling this abomination “an elephant” is controversial, in my book. 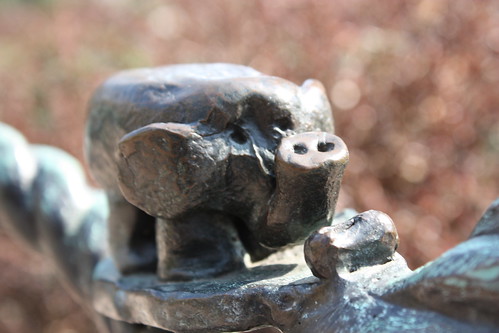 It looks like the bastard child of a pig and chimpanzee.

And, seriously, what the hell is this? 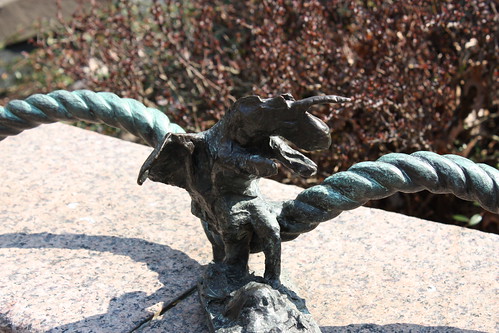 I have no idea what this is. It's part unicorn, part pegasus, part sea cucumber. Regardless, I don't remember any mention of Noah bringing it on the ark.

Sigh. Sculptural crimes against nature or no, it was still a lot of fun. I suspect that the gloriously sunny day had something to do with it. It was so nice, that we decided to spend a bit more time on the Upper West Side. If you’ve seen a lot of Manhattan already, and want something a little more low-key, and outdoorsy, I suggest wandering around up there a bit. We ended up walking through two parks …

Morningside Park, which was located just at the end of the church grounds, could very well be considered kind of sketchy were it not a lovely Sunday afternoon. 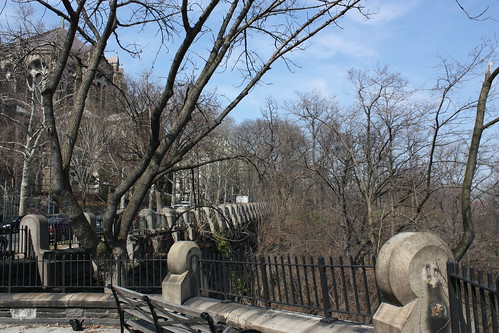 The barren trees make it look much more ominous than it was. 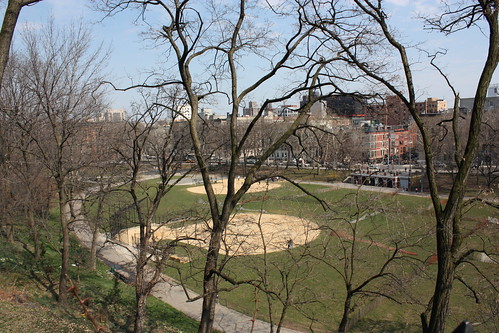 But we found it quite pleasant … 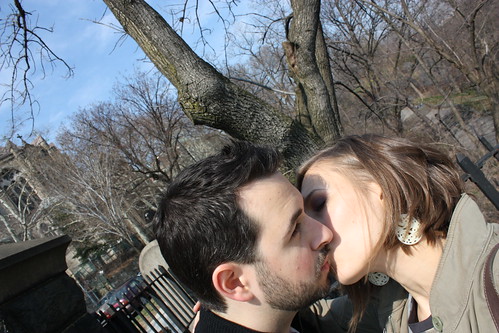 – We now interrupt this blog post for a Pinkberry interlude – 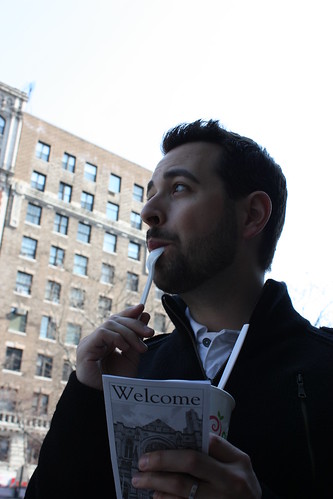 – We now return you to your regularly scheduled blog post –

Anyway, The Church of St. John the Divine is also a short walk from Riverside Park. Since the weather was fantastic, there were a lot of people out. Kids falling off bikes, parents chatting with one another – you know, the sort of thing you usually only see in real America, and not a blue state. 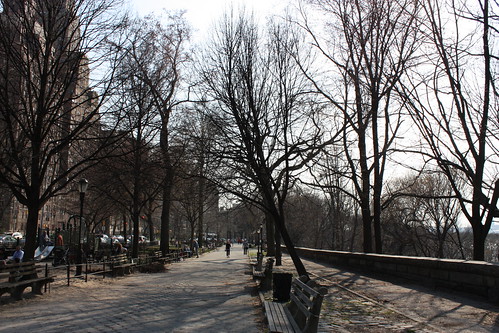 I remember it being way more crowded that this ... 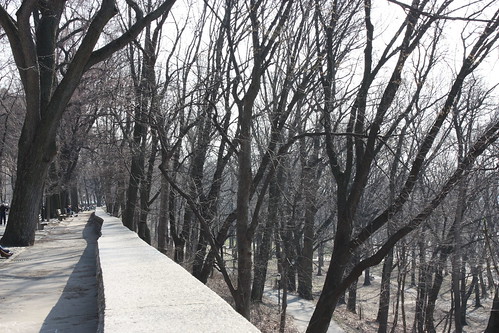 Weird that there are no people in any of my photos. Maybe they were vampires.

It was a very nice, spiritually enriching afternoon. And that evening, we most certainly did not get drunk and go to a strip club. Most certainly not. Right, Rand? 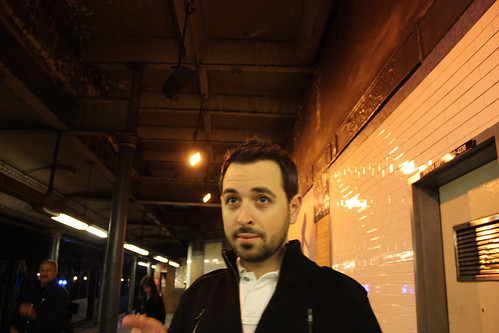