Many, many years ago, when my brother first went to college, he made some friends via the internet. At the time, it was a foreign and strange place, full of child molesters and murderers and little else (now, I am pleased to say that while a criminal element still exists online, it is mostly populated by geeks and nerds and everyone else on the planet). My brother was in California at the time, and we were still living in Florida. My brother had casually mentioned to my mom that he’d been meeting some friends for dinner – and they happened to be people who he had originally met online.

My mother, true to her specific brand of crazy, freaked out. She went apeshit. And, long story short, the evening ended with my brother meeting some lovely friends for dinner, and then returning home to find several messages on his phone from the LAPD, who believed him to be dead or missing.

My brother turned out to be fine. My mother continues to be paranoid.

At the time, though, I think her crazy made a little more sense. It was 1994: the internet was new and scary. Now, meeting people from the online realm doesn’t seem to hold the same dangers it did (or at least, the dangers my mother thought it did). Recently, I hung out with Mike Perron of PerronBrothers.com. I am pleased to say that he was not at all creepy, and that no parties involved were skinned and turned into dresses, despite repeated jokes of that nature. 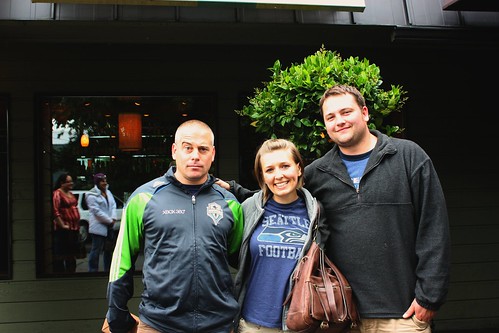 Also, it's weird that Mike's cousin and I are wearing the same outfit.

It was the first time I’ve met Mike in real life, though we’ve chatted via Twitter several times. Despite being from Oregon, he seemed pretty cool, as did his cousin. However, since he could have been an axe-wielding maniac (or, from his perspective, I could have been one), it’s always good to exercise a little caution. So, in a post that would sort of make my mother proud – though she’d still be convinced of my impeding murder – I’ve wrapped up my top 10 tips for having a safe and productive real-life meeting with your online friends.

And for the record, I would totally hang out with Moon Vest in real life …