Warning: some of the links in this post go to sites that quack, loudly. It is horrible and designers of those sites are morons. I suggest turning off the volume on your computer should you intend to click on anything.

I recently wrote a guest post for a travel blog, imploring people to be tourists in their hometowns. After all, no matter how tacky the results, you’re almost guaranteed to have fun, snapping photos and eating samples of local delicacies, and speaking with fake Minnesotan accents (which I believe to be one of the most noble of all American accents).

As an intro and example, I mentioned how several weeks ago, my friend Desiree came up from Florida to visit me and our friend Jamie (another Floridian who happens to live in Seattle, too) and how the three of us embarked on one of those tacky Seattle Duck Tours. I mentioned how it was ridiculous and silly and a lot of fun. 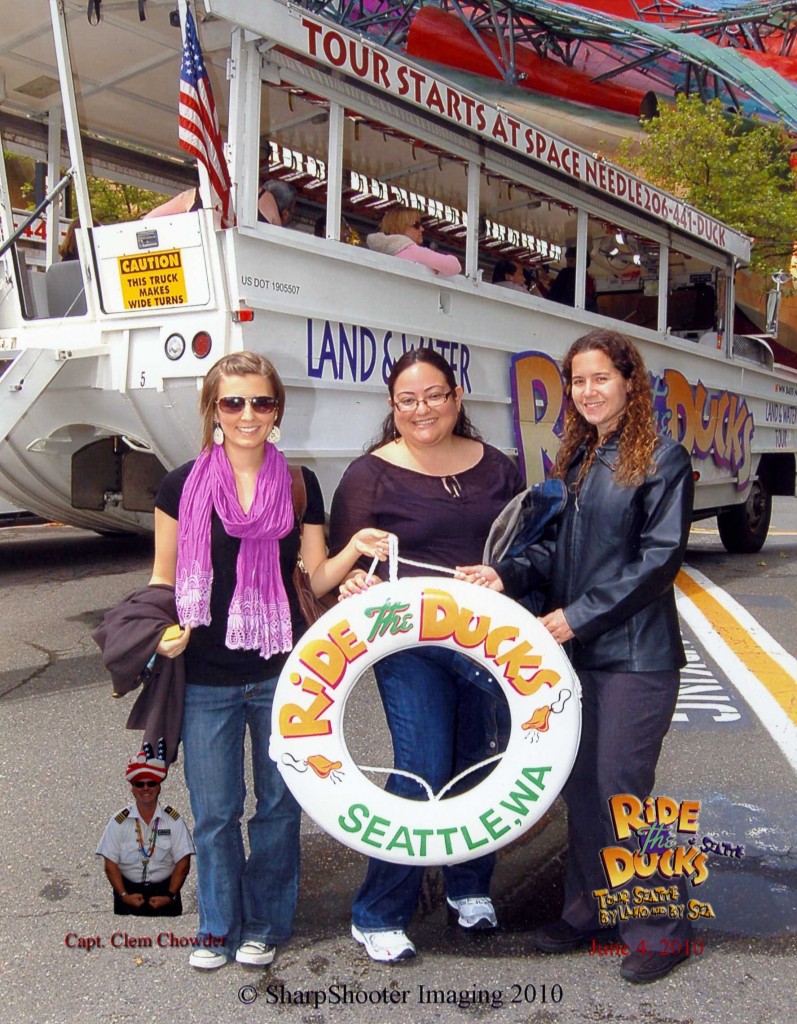 We even bought the obnoxious tour photo. (I am too lazy to edit out the copyright. I wonder what will happen.)

If you aren’t familiar with the Duck Tours, they’re old WWII vehicles that were designed to (and do) travel on land and water. They were purchased by a company that arranges tours in several major cities around the United States, including Philadelphia, Boston, and yes, Seattle. They’ve been the bane of my existence as a driver in Seattle: they slow down or occasionally stop in front of landmarks, even if they’re in the middle of traffic; they’re noisy and reek of diesel; they have trouble merging; it’s impossible to see around them.

In short, I hated the ducks, and it was only after going on one myself that my opinion of them started to soften. They were a great way to see the city, and we all had a great time.

And so I wrote up a guest post, and sent the article to the editor of the site for whom I was blogging. Between the time I sent it to her and the time it was scheduled to be published, a Duck Tour in Philadelphia was hit by a barge.

It’s funny, but even as I think about it, I can hear a record screech into silence. Yes, the Ducks are annoying, and I had a thousand problems with them. And yes, I had thought they were dangerous because I think everything is dangerous. When we rode on ours, I kept glancing at where the life-preservers were. I took off my purse (which I normally wear across my body) because I thought that, should we end up in the water, it would hinder my swimming ability. I wondered whether or not I’d have time to pull the memory card from my camera before ditching my stuff and hitting the water (yes, I really do think about these things. I’m a little anxious and have an overactive imagination. This is the result).

I think it’s interesting that my brain went into overdrive, creating escape plans that would never need to be used. I suppose I do the same on planes (like, I hate taking off my shoes on planes, especially after thinking about what a nuisance it was for Tom Hanks’ character in Cast Away to be barefoot on that island.) – I have no doubts that I will never use any of my worst-case scenario escape plans. I create them simply to make myself feel better. Should an emergency really go down, it would all likely happen too fast for me to be prepared in any way.

But despite my concerns, which, like I said, I have about everything – I didn’t feel like getting on the Duck Tour was all that risky … but now I’m wondering about it: while the boat that crashed had several crew members on it, who theoretically could have helped passengers had their been enough time, ours had only the driver/captain. He commented on how if we needed to escape, we could do so out the windows. Looking at some of the passengers, though, I’m not entirely sure that was an option: they were children, older folks, and a number of people for whom extensive mobility was not an option (in fact, this seems to be a selling point of the Duck Tours – you can see an entire city even if you aren’t able to walk long distances).

The boat smelled strongly of diesel, and this, too, concerned me. Of course, we only went on Lake Union, and the chances of being hit by a large barge (or any large vehicle of any kind) are slim at best. We saw hardly anyone out on the water, save for a few other tour vehicles.

I’ve also started to wonder about a lot of tourist attractions I’ve visited, activities I’ve engaged in. Sure, there’s always a degree of risk involved in travel. That’s part of what travel is about – taking chances, doing new and different things, experiencing a degree of risk. But usually, it seems that we know to what degree we’re endangering ourselves. Jumping out of a plane assumes a fairly high level of risk – hopping on a Duck Tour doesn’t.

And when money is involved … Eeep (imagine that I’ve just pulled on the collar of my shirt a ‘la Rodney Dangerfield). I don’t want to imply that anyone who’s out to make a buck off of tourists isn’t focused on safety – but let’s face it, security measures can cut into profits very quickly. The flip side is, of course, that all it takes it one big publicized mishap to ruin you. There seems to be some discussion about whether the Duck Tours will continue at all (they were temporarily suspended and there’s talk of lawsuits as well, naturally).

I’m not really sure what to conclude from all of this. I had a nice time with Jamie and Desiree, and as I had noted before, I was glad I went on our tour. It was a fun way to spend an afternoon, and Desiree got to see a lot of the city. But still, the incidents of the last few weeks make me wonder how many committed privately-owned tour companies are to their passengers’ safety.

So, I need someone else’s thoughts on the matter. What do you guys think about the safety of the Duck tours? Have you ever been on one? Or any other attraction with specious safety protocol? Do you create emergency plans for yourself? Share your comments below – maybe we can come to some conclusions. Or, at least, a full-proof escape plan.