I remember the day Kurt Cobain died. I was about to head to drama practice, wearing green sailor shorts, a black shirt (which still resides in my closet, despite being waaaay too small. I can’t bear to throw it away), and a little green vest. Kurt Loder broke the news on MTv. I distinctly remember thinking: Christine is going to be bummed.

The other girls would show up to rehearsal later, wearing all black. One carried a huge sunflower. They explained that they were in mourning (What? They were drama geeks. How could they not be melodramatic?) The director spent some time talking to us about depression or suicide. I don’t really remember what she said.

Recently, a friend of mine told me that she, too, remembered Kurt Cobain’s death, because it was the day she first arrived in Seattle. Everywhere, candlelight vigils were held, and she had no idea what the hell was going on.

People of my mother’s generation remember where they were when Kennedy was assasinated. She was on her way back from school. When she found out the news, she sat down by the side of the road and cried.

For us? It was Kurt Cobain. I realize that perhaps his suicide probably shouldn’t be on par with the assasination of a president. But it’s what we had, and what we embraced. It’s why I keep the black shirt that’s way to small.

When my friend Katie (who I’ve know since middle school) and her friend Dalia came into town last week, they had few items on their agenda. The Pike Place Market (obviously), The Space Needle (gah!), and, rather unexpectedly, Kurt Cobain’s house.

This last request stunned me.

“You want to go to Aberdeen?” I asked, thinking of the dismal logging town where Cobain grew up.

“No, his house in Seattle,” Dalia explained.

This shows how little I knew about the subject. I had zero clue where Kurt Cobain lived. I figured it was somewhere on Queen Anne. Turns out his house was in Leschi, which is just weird. It’s an incredibly posh neighborhood,  full of millionaires and children who go to private school. Not where you’d imagine the prince of grunge would have resided.

After some miserable driving across town during rush hour traffic, we made it to Cobain’s old neighborhood, with no idea of where we were going. GPS was only sort of helping us, and apparently the house we were looking for was mostly covered with trees, anyway. By a stroke of luck, we found ourselves behind a small dark tour bus labeled “Seattle Sub Tour.”

We followed it straight to Cobain’s house. 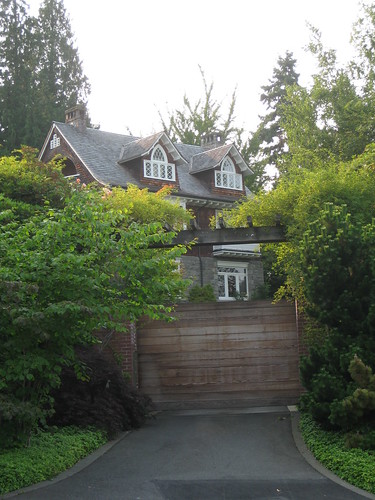 Apparently the garage where he shot himself has since been torn town, and the house is surrounded by a high gate and lots of trees. There’s an adjacent park, where a make-shift shrine has been set up for Cobain. Since he was cremated (and his ashes were … scattered? Stolen?), it’s really the only place to commemorate him in the city of Seattle. Some kids were hiding  in the bushes nearby, paying tribute by smoking weed. 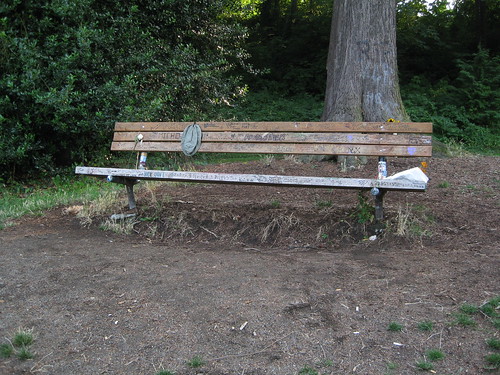 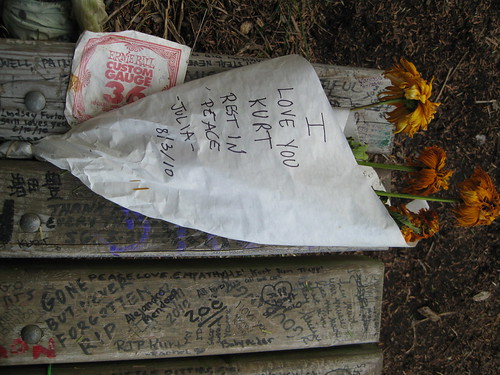 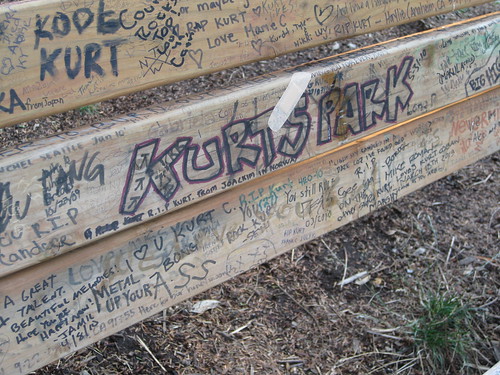 A friend of ours (the same gal who arrived in Seattle the day Cobain died) lives in that area. She explained that every year on the anniversary of his death, people gather in front of the house and in the park to mourn and remember Cobain. Which must be kind of weird for the current owners of the house.

It was somber and more than a  little sad. Of course, that didn’t stop my cousin from smiling brightly in a lot of the photos we took. 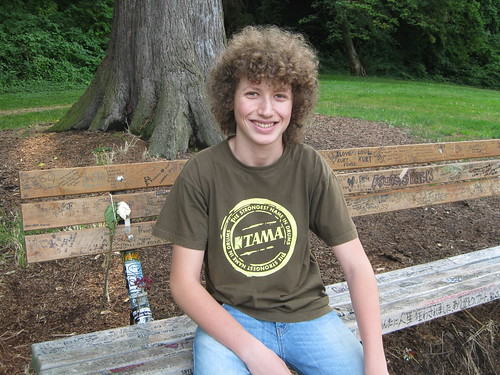 I tried to get him to stop. Really.

I realized that he was probably too young to remember Kurt Cobain’s death. I figured Cobain was to him what John Lennon was to me: we shared the world for only a few short months. I know him only as a part of history, of a time that existed before I was able to form memories. Later, I found this wasn’t the case. My cousin was born nearly a year after Kurt Cobain died. This revelation makes my head spin.

As we left Cobain’s house, I felt sad, and possibly a little guilty. It somehow seemed wrong to visit his home. Like we were somehow invading the last bit of privacy the man had left. We were turning the spot of his suicide into a photo opportunity. But sometimes, I guess, that’s how it goes. When you reach that sort of cult status that Cobain’s has, people want to see where you killed yourself.

“We’re so trendy, we can’t even escape ourselves.”

You said it, Kurt.