A few weeks back Rand and I were having a conversation with our friend Rob, who happens to be from England. The exchange went something like this:

Me: I have no idea what you’re talking about. Speak American, please.

Rob: Ahem … Did you know that up until the 1950s or 60s, the U.K. had non-decimal money? So we’d have coins for seemingly random amounts.

Me: (open-handedly slapping Rob across the face) Don’t lie to me, boy.

I swear, it happened just like that. Except for the parts that didn’t. Anyway, the important part is that Rob claimed the U.K. had non-decimal currency. Meaning that the values of coins weren’t based on the pound being divided into 100 equal parts. Instead, he explained, the pound had been divided into 240 pence.

And honestly, I kind of dismissed it along with all the other crazy things Rob says about England. 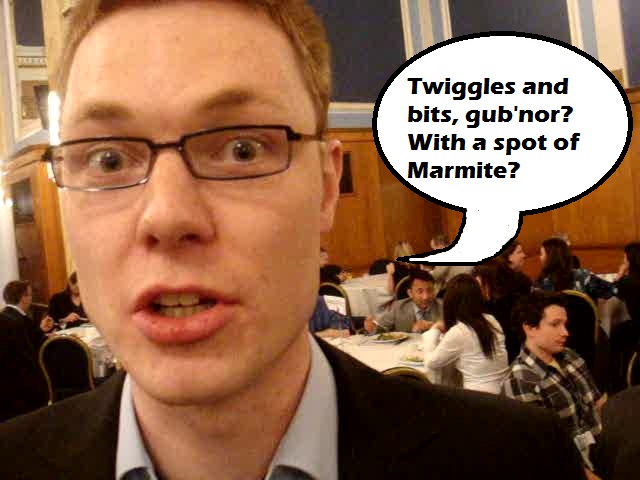 “We drive on the other side of the road! Bell peppers are called capiscums! We have national healthcare, and the government hasn’t collapsed!”

I seemed to remember a little disbelief when I told you that the UK had non-decimal money up until the 1950s / ’60s.

I got clarification from my parents while they’re here:

The smallest unit – then as now – was a penny. (Though I’ll contradict this shortly.)

There were twelve pence in a shilling, and twenty shillings in a pound.

We had a florin, which was two shillings, the coin looked like you American quarters (colloquially was called a two-bob-bit.)

We had a crown, which was a quarter of a pound, but what was much more popular was the half crown: this could be described as a an eighth of a pound, but was typically thought of as two shillings and sixpence.

We had a 6 pence coin (sixpence, though also called the tanner or half-shilling) and a 3 pence coin (threepence, but more often pronounced thrupence or threppeny-bit.)

The penny was also subdivided: we had a ha’penny coin (half a pence, we had this coin until 1984) and a farthing coin (quarter of a pence)

We also had the concept of a ‘guinea’ – which was 1 pound and one shilling (ie:21 shillings) it was used until relatively recently (still an important amount in horse racing), but we’ve not had a guinea coin for a while.

Finally, the nomenclature was to use the £ sign for pounds, s for shillings, and d for pence, so fifty bob, 3 and a half pence

–
Naturally, upon reading this, I declared Rob full of crap and proceeded to slap a photo of him (as he was not nearby). But then I started doing a little research, and it would appear, as crazy as it sounds, that Rob might actually not be making this up. For years, the monetary system was outdated, and pounds were divided into 240 parts (before you start freaking out about how crazy that is, tell me how many feet are in a mile. Yeah, you have no idea, do you?) That changed on February 17, 1971, a.k.a. Decimal Day, when the monetary system switched from the old pence (worth 1/240th of a pound) to the new pence (worth 1/100th) of a pound. A few years prior, the first of the new coins made an appearance on the High Street, causing a lot of confusion, but fortunately very little rioting (The English are very polite. If this had happened in Texas, there would have been blood).

So, wow. Rob was right. He wasn’t just messing with us. I guess I can trust his postscript, too:

Did I mention that if you press the back of the 25p coin in the correct way, it plays a recorded message from the Queen of England?

Ah, the English. So like us humans, and yet, so different.