“I need cupcakes. Cupcakes for science.” I announced to my husband the other evening.

“That sounds perfectly reasonable,” he replied.

He nodded. Usually I don’t specify why I want cupcakes. It would be like asking why fish need water, or Berkeley needs drum circles. THEY JUST DO. My existence, he long ago learned, is about the acquisition and consumption of dessert-type foods. I’m eating candy even as I type this (I am not kidding. I would not joke about something like this).

My passion for desserts is not new-found. Behold me (far left) with my brother and cousins, circa 1983:

Notice how I can’t take my eyes off the cake. Even at that tender young age, my motivations were clear.

This is not to say that my unbridled and all-consuming cake addiction has made me less discerning on the subject. Quite the contrary: when you have, over the years, eaten as much cake as I (roughly 5-7 times the amount an adult human should), you get very, very picky about the matter.

You become a connoisseur.

Which brings me to the evening at hand. As I had explained to my husband, this time my desire for cake was due to a higher purpose – science. The advancement of mankind was at stake. I was about to have a cupcake-off. I figured it was a necessary evolution of all my travels and dessert eating: I’d pair two cupcakes from different shops around the globe against one other, and declare a winner. After all, if I could use my love of cake to help other people, well, isn’t that the greatest achievement anyone could hope to have? Benefiting our society through frosting?

For my first bout, I selected New York’s famed Magnolia Bakery versus Seattle’s own Cupcake Royale.

Why did I pick these two?

Magnolia was an easy choice. Despite having become quite mainstream and popular in recent years (many blame SATC for it), it’s one of the most famous cupcake shops, ever. It had to be a contender in my inaugural bout.  And Cupcake Royale I chose because it’s my favorite cake shop in Seattle, so it’s pretty easy to pop down there and grab cupcakes, all under some thinly-guised premise of conducting an experiment.

Ah, the lies we tell ourselves.

The only hitch was that I couldn’t exactly conduct a side-by-side comparison. I was last at Magnolia Bakery ages ago. I figured this wasn’t really a problem, because I have plenty of photos to document the experience. And I never forget a dessert (my cousin learned this last night, when we were talking about his gelato shop. I remembered, in astonishing detail, past flavors he had created. He looked … alarmed.)

The only rules were these:

This last point is the most important. I remember once, as a child, being over at the neighbors’ house while they had cupcakes (they didn’t share. Our friendship did not last long). I watched as my friend Leah and her brother, Kevin (how the hell do I remember this? I was five) consumed just the frosting, leaving behind the naked little hockey-puck of yellow cake.

It was madness. Did they not realize what they were doing?

It’s almost as bad as when I see people scraping the frosting off a piece of cake before eating it. THIS IS NOT TO BE DONE, EVER. Frosting and cake need one another other. They are complimentary elements, yin and yang, black and white. The interplay of the two creates something magical – something far greater that the sum of its parts. To disturb this balance is to disrupt the very fabric of our universe.

I’m pretty sure we could trace the origins of global warming to someone scraping the excess frosting off their birthday cake back in 1926.

But I digress. On to the death match. Which isn’t really a death match at all, unless you consider that the loser gets eaten (then again, so does the winner).

Magnolia Bakery’s traditional vanilla cake with vanilla frosting (which usually comes in a variety of pastel shades. Mine happened to be mint green). 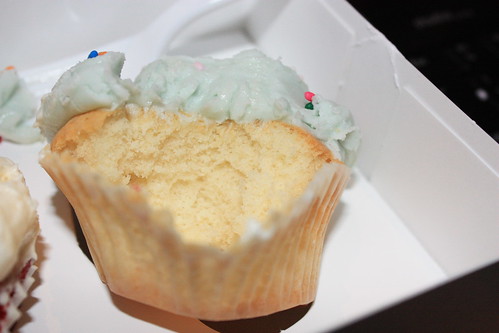 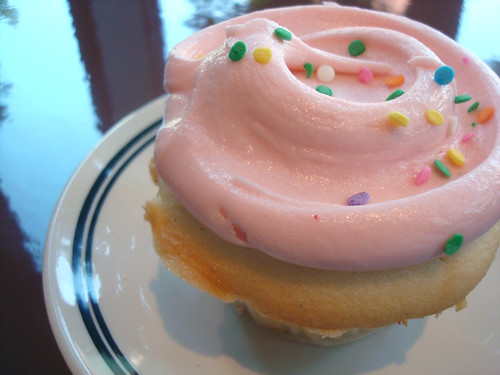 Photo by the fabulous cakespy, via Flickr.com

Magnolia’s vanilla/vanilla cupcake is iconic – it’s the cupcake that paved the way for so many others. And it really is quite good. I remember the first time I had one, in the years before cupcake bakeries were on every street corner, I was positively tickled. This time, though, it didn’t quite stand up my memory of it. The frosting is thick and smooth (the temptation to make a joke here is overwhelming), and develops a good crust. The cake is fairly dense and has a solid crumb to it – it’s sturdy, but not overly heavy or gritty (though perhaps a weensy smidge dry). The one odd thing about Magnolia’s cupcakes is that the recipe doesn’t call for any salt in either the batter or the frosting- so there’s nothing to cut the sweetness. The flavor comes off as a little flat as a result. I suspect even half a teaspoon would have given it some much needed depth.

Cupcake Royale’s Dance Party with Holly Hobbie has a similar frosting to Magnolia’s, though I suspect here’s a bit of salt thrown in the mix. For whatever the reason, it doesn’t seem to taste quite as sweet, though the consistency (and tendency to develop a crust) is about the same. The cake itself, though, is entirely different: more of a white cake than yellow, and incredibly moist and spongy (almost reminiscent of angel-food cake – I suspect there are beaten egg whites in the batter). The result is an incredibly light cake which is lovely, but one that almost runs the risk of not holding up to the thick frosting on top.

Cupcake Royale was the clear winner of this match. While the cake was a bit too light in texture, the flavor was perfect. I suspect it was the secret ingredient of salt that helped them escape one-dimensional sweetness. As I noted, the cake was almost white, not yellow – and ideally I’d have preferred something sturdier (more along the lines of the Magnolia’s). In this instance, though, it worked well, playing off the dense frosting nicely.

That’s not to say that Magnolia didn’t have potential – if you tossed a bit of salt into the batter and the frosting, they’d have something truly magical on their hands.

But it just illustrates the fact that someone who does something first doesn’t necessarily do it best.

And so there you have it. Cupcakes, eaten in the name of science. Of course, for these results to have any scientific merit whatsoever, I should probably try and replicate my results over and over and … well, you know where this is headed: 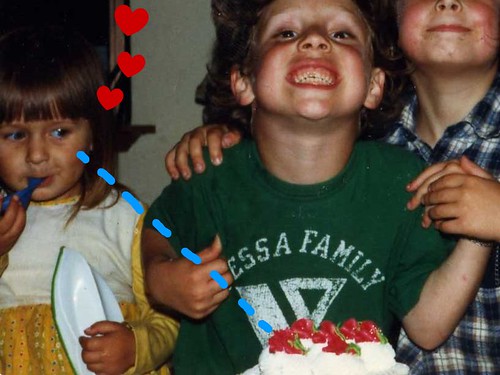 It’s the same direction I’ve been going in for the last 30 years.