Our trip to San Diego last over the holidays was marred with some heinous weather. It rained, for 7 straight days.

In Seattle, this is known simply as “a week.”

But in San Diego, land of sunshine and mirth, it was a sign of the end of days. People were acting weird. Like, vacant-eyed, moody, maybe-I-should-take-up-the-guitar-because-I’m-stuck-inside weird. Being from the Pacific Northwest, this phenomenon was not unfamiliar to us.

Rand and I watched them as though they were hamsters in a cage. We’d occasionally tap on the glass, to see what they’d do. Mostly, they complained/marveled at the weather, acted confused, and then got into fender benders because they can’t drive in any sort of precipitation. (Insert another zinger here noting that this is how we Seattlites react to snow).

While we are no strangers to wet winter weather, we were bummed by San Diego’s downpour.  Rand and I hoped that we’d get to enjoy the sun, and some long, lazy days spent outside, drinking margaritas and laughing at people who consider 65-degree weather “chilly”. Instead, we were soaked. And miserable. Probably more so than had we stayed at home. Because Seattle is supposed to be rainy and rotten in December. San Diego is not.

Our hometown, having sprouted up in the rain, knows how to deal with it well. There’s plenty of things to do in Seattle that don’t require you to step outside in dark, miserable months of winter. Awnings to stand under. Covered walkways to follow. We have sky bridges and a teeny tiny semblance of an underground (in the form of the bus tunnel). Even on the grayest days, Seattle manages to twinkle, just the littlest bit.

And on sunny days? It positively glows.

But San Diego, a town that rarely has to deal with more than a few drizzles every now and then? It completely shuts down in a downpour. The outdoor cafes are barren. The open-air malls (a concept that I find foreign and fascinating) are vacant. The beach becomes a distant memory. The town, lovely in the sunshine, just becomes … ick.

And that’s when it hit me: cities, like people, need good lighting.

On rainy days, Seattle may not be a great beauty, but her quirky, fun, and intellectual sides shine through. After all, since she couldn’t rely on her looks, she made sure what she had on the inside was great: good music venues, interesting boutiques, wonderful restaurants.

But in the rain, San Diego is like the pretty girl whose beauty suddenly faded. Having skated by on her looks (the fabulous beaches, the blue skies and sunshine, even in the middle of winter), she has, it seems, less to offer on a rainy day. Denied outdoor seating by the inclement weather, we sat inside at a few of our favorite San Diego cafes and bars … and soon realized that without the fantastic view or sunshine, the beer was middling, the food mediocre at best. The rain had cast the city in an unfavorable light.

It reminded me of that one Seinfeld episode (seriously, how often do I reference that show? It’s getting ridiculous) where Jerry starts dating a girl who, as George informs him, is a “two-face.” Depending on the lighting, she switches from gorgeous to not-so-gorgeous, and back again.

(For the record, I always thought that episode, while funny, was kind of lame. The girl is cute even when she shows her ugly face, and let’s be fair: Jerry Seinfeld is not a Greek god. He’s just not.)

In the harsh light of gray, San Diego showed us her ugly face. Rand and I repeatedly asked each other what, exactly, we were doing there. How could we have ever thought Ocean Beach was so great? The pace of life was painfully slow. The people had no sense of urgency – it took forever to get service at a restaurant, to get checked out at the grocery store, to get anything done, anywhere. There was traffic at all times of day, even in the most outlying of areas. The sidewalks were poorly lit, and littered with dog poo.

“This is terrible,” I groaned after our fifth straight day of rain. Rand quietly nodded, and we both vowed that next Christmas, we’d go somewhere else. Almost immediately upon agreeing on that fact, the skies cleared. It was glorious. 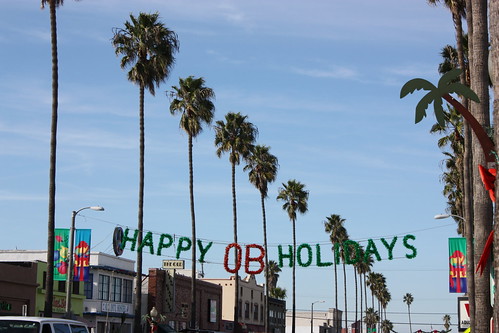 We forgot about the bad restaurants, the miserable walks in the rain, the drivers who careened into one another (but thankfully weren’t hurt). We sat in a cafe that on a rainy day may have been mediocre, but in the sunshine was nothing short of fabulous. When the waiter forgot to put in one of our orders, we deemed it considerate of him (“He’s watching our waistlines!”). We were cheerful and giddy.

I often remind myself that looks aren’t everything – that it’s what on the inside that counts. And, sadly, San Diego – quite literally – doesn’t have that much going on inside. She has few things to offer on a rainy day. Fortunately, those are few and far between in Southern California.

And when they do come? Don’t worry. Things will be pretty again. You just need to wait for the right light.