Recently, I met up with travel blogger (redacted), who was visiting Seattle with her mom. They were both in town from (redacted), because (redacted) had a (redacted). Sigh. Let’s just call her “Redacted,” okay? And her mom can be Sue. That’s going to make this all a lot easier. (Also, names have been redacted for nothing sinister or bad. Some gals just like their privacy. I can respect that.)

Anywho, Redacted and Sue and I had lunch in the Pike Place Market, and I showed them around the immediate area. We tried to stop by the fish-throwers, who were sadly out closed for renovations (and still are. In 30 years, I’ve never known them to be closed. So sorry about that, ladies). As we were wandering around, I asked if they had seen the gum wall.

They hadn’t. And when Sue asked precisely what it was, and I started to explain, I realized just how ridiculous of an attraction it is.

Seriously, people of Seattle. I love you and all, but WTF?

The gum wall is in Post Alley, a winding mostly-pedestrian street that runs through Pike Place Market. The gum wall resides in a less frequented part of the alley – just south of the brass pig in the market is a narrow stairway that winds down and around. Follow it, and you’ll find yourself in a forgotten part of the market, dotted by a few bars and restaurants, a small theater, and the gum wall. 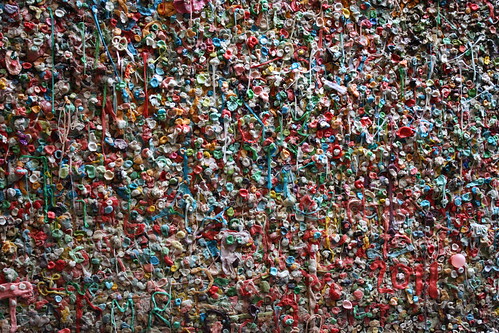 It kind of looks like a Jackson Pollack. Only grosser.

You can’t actually discern the size of the gum wall from my photos, but it’s pretty darn expansive (this might give you a better idea of the dimensions). And it keeps growing. 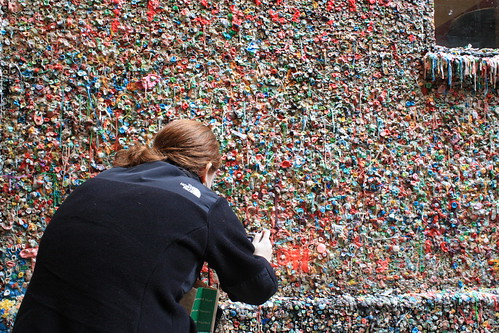 Sue was horrified. Redacted was bemused. I was introspective – trying to figured out exactly how and why all this came to be. I’ve seen plenty examples of weird traditions in my travels – people putting their hand into the Boca della Verita in Rome, grooms carrying their new brides up the stairs of the church in Bled, Slovenia (like Rand did to me). Most of them made me smile or shrug. There were few that I could explain – clearly someone just started doing something that would later become tradition. Such is the case with the gum wall – its history is neither miraculous nor logical.

Folk started placing gum on the wall before going into the theater. Theater workers scraped the wall down a few times, but they couldn’t keep up, and eventually the gum wall was born. It’s now … a thing.

I couldn’t give Sue and Redacted a better explanation that that.

Their reaction, and mine, was something along the lines of, “Whoa … Ew.” And later, “WTF”, too.

I can’t be the only one with something inexplicably weird in their town, right? If you’ve got something incredibly weird to share about your town (or a place you’ve visited), include it in the comments, or contact me about writing a guest post (contact-at-everywherist-dot-com).