Recently, my home has come to resemble a slumber party full of middle school girls. There’s been lots of giggling, and excitement, and jumping around, and yes, it’s because of a boy. 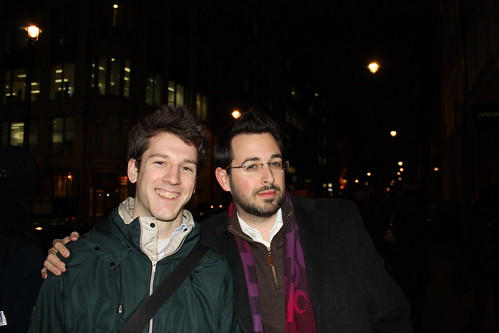 I don't know what they were doing here.

Adorable, ain’t he? Ignore the hair. It just … well, it just is.

The lovely gentleman pictured with my husband is Tom. I have, on occasion, ridiculed his brother on this site, as well as his colleagues, but there’s been sad little mention of Tom himself. Which I intend to rectify. Because this past weekend, Tom arrived in Seattle for the work-equivalent of a foreign exchange program. He’s going to be putting in some time stateside, and, as Rand put it, “making everything better.” Hence the giggling. And the running around. And the general behaving like 12-year-old girls who’ve inhaled a pack of pixie sticks and watched the entire Twilight canon. In short, we are excited.

This cultural exchange of sorts will also mark the longest time Tom has spent in the United States. And since he is a dear and well-behaved lad, I feel that there are a few terms which he, as a Brit, may want to avoid while he’s here. It’s not that they’ll get him into trouble. It’s that no one will understand what he’s talking about. And also, they might get him into trouble.

Diary: In the U.K., a “diary” is what we Americans would call a “calendar” or a “planner”. So, when we told a friend in the U.K that we wanted to have dinner of Thursday, and he replied, “I’m going to put it in my diary,” he was probably not deserving of all the ridicule we dished out. Because here, it’s something teenage girls write in. As in,

Today Tom Critchlow came to town and I have never been happier. I haven’t been this excited since [insert Twilight reference].

(Not an actual excerpt from Rand’s diary, which is sealed with a heart-shaped lock that I can’t bear to pick. A man’s girlish dreams are his alone.)

Front-bottom. Clearly, I must have a weird impression of how Tom’s going to be spending this time in the U.S., if I thought that prolific use of this term might be a problem. But here’s the thing: while across the pond “front-bottom” is a kind way to reference one’s genitalia, over here in the states, well … Well, it doesn’t mean anything. But it does bring to mind having a tiny little butt where your man-bits are supposed to be. Something like this: 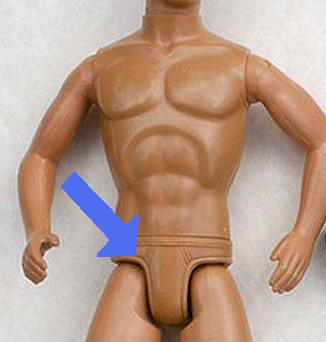 This might be the picture that causes Rand to insist I get a job.

Capsicum. I once spent 30 minutes with a jet-lagged Brit trying to figure out this term. It’s absolutely impossible from context alone.

“You know … those vegetables. With the seeds. That come in all the colors.”

It was a rough night. Just say “bell pepper” and spare the ignorant Americans around you a stress headache.

Biscuits. If you see biscuits on a menu, please know that you will not be getting these:

No. Instead, you will be getting these: 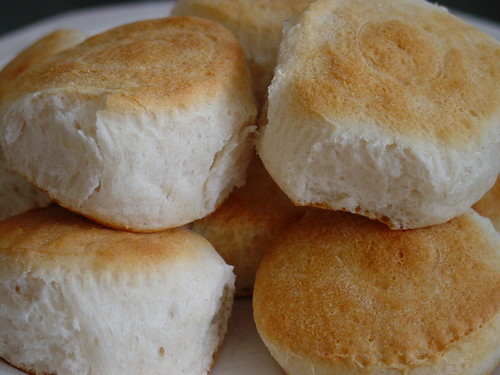 Photo courtesy of larryjh1234, via flickr.com

They’re a bit savory and kind of like scones. And they’re what we’re talking about any time you see “biscuits and gravy” on a menu. Certainly not cookies and gravy. Although I’ve learned not to underestimate the Cheesecake Factory.

Fanny. Riiiiight. So … this probably falls more in the category of “Things Americans shouldn’t say while in Britain,” but it’s still an important one to note, right? Because in the U.K., it means … um … lady bits. But in the U.S., it’s kind of a cute way to say one’s bum, or, more simply, an antiquated woman’s name. It’s totally innocent – and why we can have candy companies with names like Fanny Farmer.

Which I’m guessing would be akin to having a British candy company called, I don’t know, “Vagina Horticulturist.” Actually, I’m willing to bet there’s a market for that.

Chips. This is just going to confuse everyone, because your chips are our fries, and our chips are your crisps and our fannies are your vaginas and now my brain hurts. One point of note: if you’re in a restaurant, you’ll have to ask your server for vinegar if you want it (it’s not just sitting on the tables). Vinegar on fries is a totally foreign thing here: the only people who do it are Europeans, and hipsters who are trying too hard.

In search of vinegar. For their chips.

Pants. If someone says “pants” in the U.S., they mean trousers. My understanding is that in the U.K., “pants” is actually short for “underpants” – which I have no doubts could lead to some delightful misunderstandings. Like, for example, the time a friend of mine bought waterproof fishing overalls for an upcoming trip. He excitedly told his fellow travelers that he had a great new pair of rubber pants.

They were British. And mortified. 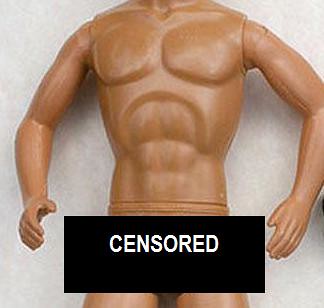 Aw. He IS always on my mind.

So just remember: if an American girl says she loves Willy, you haven’t necessarily sealed the deal. Unless, of course, you actually are Willie Nelson. And in that case? Bravo, good sir. You are a treasure.

Image via perferredsod.com, which is a domain I really wish I owned.

I only vaguely know who this is.

In the U.S., you’d likely call someone a douche instead of a sod. As in, “That guy was so douchey, he could have cleaned out an entire Fanny Farmer factory.”

Anywho, that’s about it for today’s lesson. There are other words that don’t translate well from American English to U.K. English (and vice-versa) but these were just the ones I thought were most likely to get you in trouble/deported. Anything else will probably lead to some adorable Hugh-Grant-like foibles, which will likely play really well here. So welcome to the U.S., Tom. Our diaries have never been so interesting.