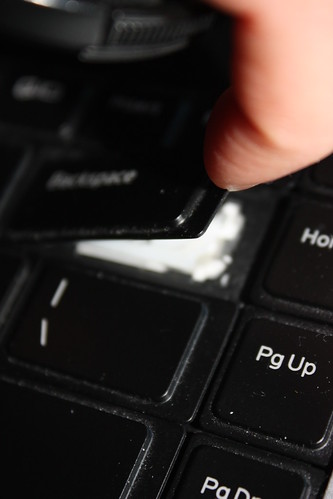 The backspace key is now removable.

I’d like to take a few moments to remember, with extreme fondness, Rand’s dear departed laptop.

It traveled with us across the globe. It never made weird sounds, it was quick to start up, and had a battery life that was unusually long. It was lightweight and kept my lap warm on cold winter nights when I sat on the couch browsing the internet.

It was a good laptop, and it left us too soon.

It met its end last Friday, at the hands of a TSA agent in San Diego airport. They were sending everyone through the back-scatter machines, and Rand and I opted out, as we usually do. TSA kept us waiting longer than usual for our pat-downs. A line formed behind us of other opt-outs, but they soon decided to simply go through the back-scatter machines – a TSA tactic that I’m familiar with. Inconvenience anyone who expresses dissent to the point that they’ll fall back into line. It worked with basically everyone except Rand and me.

For those of you unfamiliar with the opt-out process, TSA will make you stand aside until they locate an agent to physically pat you down. This usually takes a while, during which the agents will roll their eyes at you and otherwise express disdain (at least, in my experience). Once they find an agent, they walk you through to a screening area where you will be pat down. They remove all of your things from the x-ray conveyor belt, and carry them over to the where you are being screened. During this time, you are unable to touch any of your items – only the TSA can do so, because once you have opted out, you start to lose your rights and are treated like a criminal.

Actually, once you enter security screening, you lose your rights and are treated like a criminal, but I digress.

I was being patted down by an agent whose name tag read “Jones.” I opt out a lot, so the pat-down for me is not a big deal, usually. But Agent Jones seemed to be in a bad mood – whether situational or dispositional, I can’t say. But she seemed incredibly angry. She was brusque with her description of the pat-down. I replied yes to all her questions, and then she started the process.

Like I said, I get patted-down, a lot. I’m used to it. It’s not that big a deal. Until that day. Agent Jones did not have a delicate touch. She rammed her hand into my crotch three times during my pat-down. It was more than incidental touching, and I was wearing thin jeans. It was shocking to say the least.

When my pat-down was over, I was allowed to gather my things. I did so, and noticed Rand was sitting a little ways away. He was in a chair, looking uncomfortable. A TSA agent was hovering over him. Rand has his laptop turned on, and the agent was peering down at the screen.

I wanted to go over and ask what the hell was going on (since when is TSA allowed to search the content on our laptops, too?) but knowing that was a bad idea, I just stood where I was until the agent told Rand he could put his things away, and left. I walked up and asked Rand what was going on.

“He dropped my laptop.”

Boy, did he. As I noted before, once you opt-out, or are selected for additional screening, you can’t touch your own possessions. TSA has to move them. Rand offered to help with his stuff, because there was a lot of it, but the agent insisted he could carry it all. He couldn’t. He dropped Rand’s laptop, cracking the plastic case, knocking off keys, and irreparably damaging the screen and it. 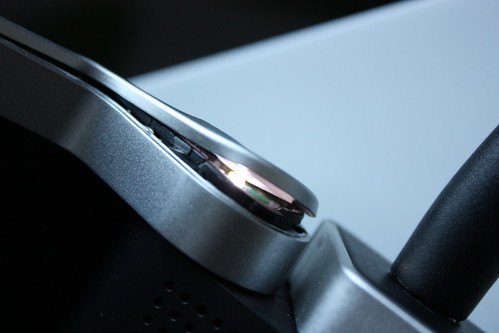 Look! You can now see inside. Which is not good.

He told Rand to turn it on to see if it was damaged.

“And you did?” I asked, mortified.

The agent – in a position of total power in this situation – made Rand check for damages while he hovered over his shoulder. The thing could have erupted into a puff of smoke when Rand hit the “on” button and I’m sure he would have said it was fine.

Note to TSA: No one will honestly tell you when you’ve broken their stuff because THEY ARE AFRAID OF YOU. YOU CAN LOCK THEM UP.

So Rand’s laptop turned on. Which, as those of you who’ve ever used a computer know, means nothing. It’s like saying a car works because when you turn the key, the ignition starts. There are, of course, a million other things that are required to get a car to actually drive. Much like a computer. Turning it on? That’s one thing. Getting it to work? That’s another.

I wanted to do something – get the agent’s name, or something, but he had already booked it to the other side of security, where we couldn’t reach him. I ended up telling another agent what had happened, and she called over a supervisor.

It got worse from there. The supervisor refused to give us the agent’s name (which, I’ve since discovered, it incredibly useful when filing a claim with the TSA. No name? No claim). Instead, he told us we could claim online, then demanded to see Rand’s identification, which he took and photocopied.

“Just so we aren’t ambushed,” he explained (the irony of his statement did not resonate with him).

We stood there, waiting for the guy to come back with Rand’s I.D. The trip through security had taken us more than half an hour, and we were on the verge of missing our flight. He eventually brought back the I.D., but by that time, we were more than sufficiently intimidated.

After all, TSA had Rand’s name. They had our address. They had breathed down Rand’s neck while they made him open up his laptop. They kept us waiting while THEY PHOTOCOPIED HIS I.D. And this, mind you, was before we had even brought up the issue of a claim.

We left security feeling miserable. As we did so, I noticed that the metal detector had been opened up, and they were now sending people through there.

We eventually boarded our flight (after a two-hour delay due to a malfunctioning gauge on the plane), but what had happened in security messed with my brain more than I thought it would. I felt sick. I kept thinking about the agent hovering over Rand, as he tried to get his computer to turn on. I’d never seen my husband look intimidated, ever, until that moment.

I may have cried.

Now, we’re back at home, and Rand, in his ever-present quest to atone for sins that are not his, has been trying to cheer me up. We’re not really sure what to do now. He needs a new laptop for work, obviously, as the one TSA dropped is in no shape for use, much less travel. We could file an appeal, but that’s a lengthy process that requires you to have the agent’s name, which the supervisor refused to give us (though I did get the supervisor’s name – it’s Zaitz, for what it’s worth). And given how much we were intimidated before filing a claim, lord knows what it would be like afterward. Rand is praying that he’s not on a list already. Given how much we fly, we can’t afford to be flagged by TSA for being problematic.

So I suppose we just have to take the loss on a computer that cost us over a grand and was in perfect condition until last weekend. Besides, even if we do file, the TSA is the one who reviews our claim, and it seems unlikely that they wouldn’t find in their own favor. The conflict of interest there is so absurd, I have trouble wrapping my head around it.

As for our laptop, R.I.P., little buddy. You deserved a better end than the one you received. You were destroyed without so much as even an apology from the TSA agent. I understand that doing so would have been akin to declaring culpability, but at some point, we have to stop being bureaucratic tools and start acting like people again.

But that’s unlikely to happen at a security checkpoint.