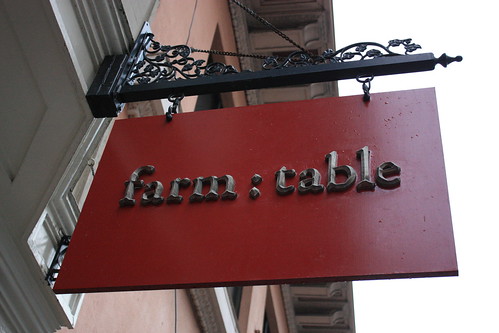 Restaurant may be smaller than it appears.

A few years ago, we were having dinner with some of Rand’s colleagues. When we were trying to decide what to order, one of the gentleman suggested we share food.

“After all, I’m from New York, where life is a shared experience.”

I wanted to hug him.

I feel the same way: I love cities. I love wandering around alone, but not feeling lonely. Having brief moments with people who I will never see again. A conversation on the bus that we both know will last only until the next stop. An observation about a painting, whispered in a quiet gallery. These exchanges bring me back from the hours I spend roaming a city solo, tie me to the place where I currently find myself, make me feel like I’m a part of everything.

It’s extended to restaurants as well. I’ve seen countless restaurants opt for long, picnic style tables instead of small separate ones, full of people who are eating together, but who aren’t together.

But Farm:Table in San Francisco proved to be too much for me. Rand and I tried eating there together one morning a few weeks back, and I felt like I was crashing brunch at a hipster commune. There was one table, surround by benches, in the middle of the cafe. It was impractical: a bar or several tiny tables would have seated more and taken up less space.

When we walked in, every single person sitting down looked up and stared at us. I mean, why wouldn’t they? We had, essentially, walked into a rather intimate breakfast get-together. A few folks milled about, hoping a seat would vacate, but those sitting down put blinders on and held firm to their wooden-bench-seating, despite having already finished their meals (not cool). 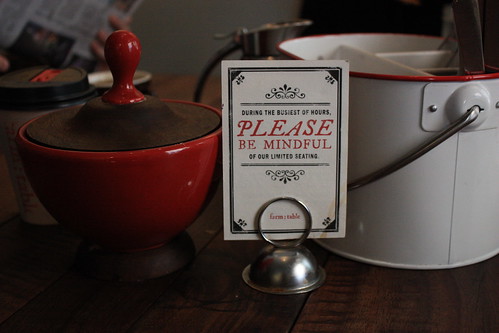 Rand and I turned around and left without even trying to get a seat.

The next day, I decided to try again, on my own. One of the advantages of spending time in a city all by my lonesome is that I can pretty much get a seat at any restaurant. Farm:Table, despite its absurdly limited seating, was no exception. I sat down at the communal table, and again, everyone turned to look at me.

I smiled. I nearly uttered hi. They said nothing, and returned to their conversation or newspapers.

Dear god. This felt like high school. And I had just forced myself into the cool kids’ table.

Looking around, I noticed a few of the folks from the day before. They were apparently regulars – hanging out day after day, sometimes ordering food, sometimes just gossiping amongst themselves or with the staff (yes, I was eavesdropping. It was impossible to avoid). This cafe was their local hangout, a fact that would have resonated better with me had it not been the size of a coat closet.

The menu, like the seating, was limited. I ordered the only savory item they had: eggs on toast, with mushrooms, leeks, thyme, and prosciutto. Though tasty, the execution left something to be desired: it arrived at my table cold, and the bread was cheek-cuttingly hard. 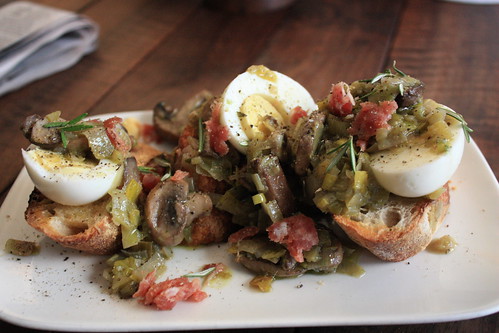 It was gorgeous, though.

As I tried to cut into my toasts, I sent crusty shrapnel everywhere – and given the proximity of the other diners, this made me incredibly nervous. I’m certain I saw a dime-sized crumb fly from my plate and whack my neighbor in the forehead. Bless him, he said nothing. I hugged my elbows in, and tried to chew quietly.

I’m all for communal living, but this was downright anxiety-inducing.

The moment I finished eating, I got up to leave – the regulars were still sitting across from me, and looked at me as I thought I was nuts. There were going to be there a few more hours, I was sure. But there were other folks who wanted to sit down, and I couldn’t relax and linger in such a cramped environment. I paid my bill, and walked out on the street.

From there, I roamed down a few deserted blocks, talking to no one, keeping to myself. It was nice. Life may be a shared experience, but after a breakfast at Farm:Table, all I really wanted was to be alone.