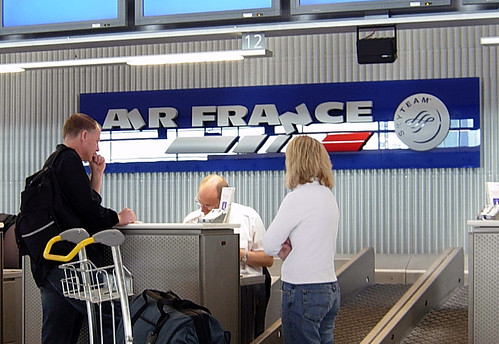 Photo by the fantastic @sallysimpleton, who I really need to visit now that I'm home.

Misery, thy name is Air France.

Rand and I are home after a long trip to Europe, a trip made even longer and more difficult by the good people of Air France. They must have an extreme fondness for us – as they did everything possible to try and keep us the country, and when they couldn’t prevent us from leaving, they kept our suitcase as a souvenir. Forgive me if I have trouble writing this post, but this Dick Move is still fresh, like a crisp baguette still warm from the oven (also, apparently I am hungry, and thinking about French things isn’t helping).

Let’s start at the beginning, shall we? We booked our tickets with Air France months ago – sometime in January. It was our first time flying with the airline, and we hadn’t really heard anything (good or bad) about it. Our flight to Europe was without incident, and the plane was a newer one. We were in the Premium Voyageur section, and while not quite as nice as BA’s World Traveler Plus, it was still pretty darn comfy. It was on our return flight that things started to break down. We were going to be flying from London to Paris, and from Paris on to Seattle.

Though it was ridiculously early (5:20 in the morning) there was already a line at the Air France check-in counter, and seemingly no where else. Our flight was at 6:40, and the line was short, so I wasn’t concerned. That is, until we realized the line wasn’t going anywhere. The attendants at the counters took forever with every traveler who approached them. After 20 minutes, we finally made it to the front of the line, and the woman at the counter printed out my ticket, but aimlessly was punching at the computer in order to get Rand’s “released.”

“What do you mean the tickets are blocked?”

“The flight is oversold, so it isn’t letting me assign you a ticket.”

Rand and I stood, confused.

“But we have a reservation,” we explained. “We booked these tickets months ago.”

“Yes, but it is oversold. There is nothing I can do.”

Those of you who travel a lot probably know how this works – all airlines oversell their flights by about 15%. They assume that some people won’t make the flight, so it’s how they can be assured that all the seats will be filled. If everyone shows up for the flight, there are too few seats, and people will be bumped off the flight. As unjust as it sounds, it’s usually the folks with the cheaper tickets that get bumped first (or those flying on free or reward tickets. Yeah. Taunt the wretched, I always say.)

I’ve always known that this was a risk when traveling, but it never bugged me. In the states, the airline usually requests volunteers to be bumped (and compensates them with free travel vouchers). And without fail, someone takes it. We always get a seat – we usually fly Alaska Airlines (a partner of Air France) on which Rand has frequent flier status, and when we fly internationally we travel in the just-a-smidge-above-economy class, both of which reduce your chances of being bumped. Also, it is incredibly unusual for one person in a party or two or three to get bumped. It’s far more likely that a solo traveler would get kicked off. But here we were, in risk of me going home alone, and Rand getting stuck in London or Paris.

Now, this alone was not enough to merit Air France a Dick Move. But the sheer incompetence with which they run their airline? Yeah, that did it.

Keep in mind, we never check baggage – but I’d done a bit of shopping in Italy (sorry, Rand). Oh, and in London. So my bags were bulging, and I had acquired an extra one along the way, which I checked. Rand, due to fatigue, decided to check his bag as well. This was where we messed up. We should have just taken it with us as a carry-on. But we had been up since four, so we weren’t really thinking straight. Again, sorry, Rand. I should have thought better on that one.

The attendant refused to take Rand’s suitcase, saying if he didn’t get on the plane, then they’d have to remove the bag, causing delays. Instead, she managed to get him a ticket to Paris (and no further) and gave us vague directions to talk to some young man over at another counter. We eventually found him, and Rand had to jump the line to get his attention (by now we were in danger of missing our flight). The man took Rand’s bag, gruffly told him he probably wouldn’t get on the flight to Seattle, and walked away in a hurry.

During their exchange, I chatted with a group of Londoners who had just gotten booted off our same flight. Like us, they had made the reservations months ago. Together we lambasted Air France, and they wished me luck getting home, saying that there was hope, since there were now four extra seats that they had been forced to vacate.

When we finally got on our plane to Paris, we found that we were not seated together (no surprise), and, weirdly, that there were a ton of empty seats in Air France equivalent of first class (at least a dozen of them) that were never filled. Rather than upgrade people, Air France chose to kick them off the flight instead. Ugh. Dick Move.

In Paris, we walked up to a counter, and a woman printed out a ticket for Rand, with absolutely no difficulty. We were incredibly relieved. He was coming home. We inquired about his bag – she noted that it was all checked through. When we arrived on our flight, we found that our seats were not the ones we had reserved (we had requested aisle and window, but were crammed onto a row with a third traveler), were in the bulkhead (which I hate) and that, again, there were tons of seats in first class which went vacant. So Rand had almost been left in London, and then Paris, because Air France doesn’t understand that when you oversell in the cheaper cabins YOU HAVE TO UPGRADE PEOPLE IF THERE’S ROOM IN FIRST.

At this point, though, I was willing to call it good.

But Air France wasn’t finished being a total dick. When we arrived in the states, we waited for ages for our bags to come. Mine eventually did, and after half-an-hour of waiting, we found that Rand’s did not. When we asked an Air France employee she noted that they had been paging us for half an hour (This was a lie. “Rand Fishkin” was not paged once. “Fuzzy Lumpkin,” however, was paged at least a half dozen times). They explained that our bag did not make the flight (since Rand didn’t have a ticket through to Seattle when we left London, they never had any intention of putting our bag all the way through. All the employees who told us to the contrary were either misinformed or lying). It’s apparently leaving today (maybe) and we might get it on Wednesday (again, maybe).

And so, for this cacophony of events, for this terrific display of ineffectiveness and ineptitude, I can say, Dick Move, Air France.

Now if you’ll excuse me, I’m off to the local French bakery. I’m in desperate need of a croissant.