While down in Portland a few weeks ago, I met the lovely Jessica from WhyGoItaly. I can easily attest to her awesomeness (and I swear, even if she didn’t read my blog I would do so). She gave me some tips about our trip to Italy (which were profoundly helpful – but that, as they now say, is another post), and I asked her for some Portland suggestions, as I had the day free.

The strange thing about Portland, we noted, is that there isn’t a lot to do. Well, that’s not entirely true – obviously, there’s good shopping (tax-free! Whoo-hoo!), a rich night life, and a museum or two. But in terms of attactions or notable landmarks to visit (a’la Seattle’s Space Needle or San Francisco’s Golden Gate Bridge) there aren’t really any. Instead, it seems that the thing to do in Portland is eat.

The food scene in Portland is unlike anything I’ve ever experienced. The place is rife with restaurants, and the cultural landscape and competition demand that they be good. Like, really good. Like, this-is-the-best-thing-I’ve-ever-had-in-my-mouth-(that’s-what-she-said) good. Like … you get the idea, right?

There’s such a wide spectrum, too. From the food carts that cluster around the city like herds of enormous metal cows (god, I suck at analogies. Especially while jet-lagged) to fancier upscale restaurants serving gourmet popcorn and artisinal cocktails, to everything in between. It can be overwhelming. I asked Jessica for a lunch recommendation, and she advised me to head to Pok Pok. I promptly did so.

It was located on Portland’s east side, an area so counter-culture and cutting edge, it makes downtown Portland seem square by comparison. It’s weird on another level (think Stefon from SNL weird. It’s not unusual to see guys with old-timey mustaches riding Victorian-style bicycles. I accidentally found myself in a vegan shoe shop, ashamed at the massive leather boots I had on, talking to a girl about a nuanced Chinese wish for good luck. I was confused).

Pok Pok was packed, but I managed to snag a seat at the bar (one of the many advantages of dining solo). 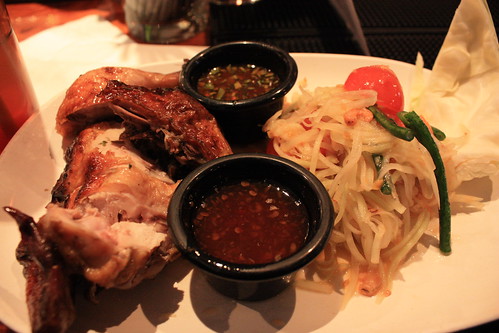 The Pok Pok Special: A half roasted game hen with papaya salad, dipping sauces, and sticky rice. I recommend it.

On Jessica’s advice, I order a drinking vinegar mixed with club soda. A japanese concoction, drinking vinegars are sweeter and milder than those we’re used to – and they make a tart and addictive drink when mixed with soda water. I chose pomegranate, and could have downed three of them. 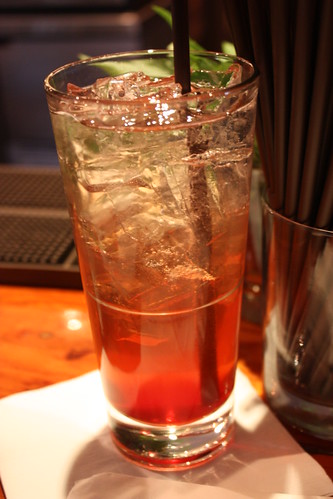 I left full and happy, with only a  twinge of sadness from the fact that I was full (being full in Portland is the worst thing ever, because it means that you have little room for more food).

Fortunately, Pok Pok is not an anomaly in Portland. There’s always more to eat. Back downtown (where Seattle yuppies like ourselves feel more comfortable) Rand and I popped into Habibi, which we happened to pass by while starving. Here’s one of the nice things about Portland – even the run-of-the-mill places are going to be very, very good. It’s not unusual to find Middle Eastern restaurants like Habibi in our next of the woods – but it’s unusual to find ones that are that good. Even familiar dishes like baba ghanoush and tabouli were escalated to a state of pure yumminess. 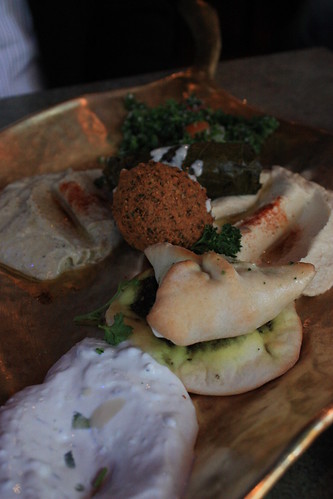 Seeing as how we seemingly could do no wrong eating in Portland, Rand and I pressed our luck and wandered into yet another randomly-selected restaurant. Hillbilly Bento was a tiny hole-in-the-wall serving barbecue. It was a little sketchy looking – which would turn me off had we not been in PDX. There, sketichiness is almost a sure sign that the food will be awesome (after all, they can afford to be sketchy, right?). And it was. 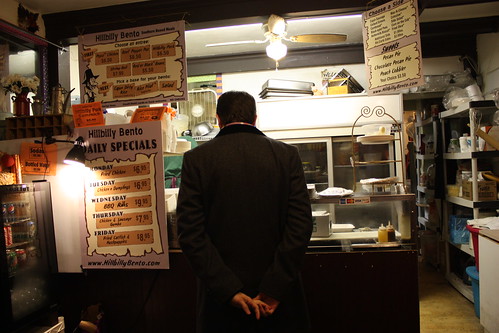 Rand is overwhelmed by the options.

There is something delightfully wrong about seeing my Jewish husband describe a pork dish as “buttery.” And yet, and yet, and yet … mmmmm. I had just eaten when we found this place, and I had to exert all my willpower to not eat the entirety of Rand’s fried okra. Usually a slimy and alien-seeming vegetable, Hillbilly Bento’s version has a perfect texture: not too mushy with a crisp coating. 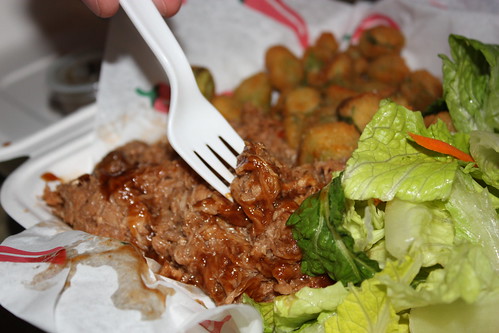 Note: European jet-lag has me aching for lunch at 10 am. This post was excruciating to write.

Just going through my photos from Portland, my stomach starts to rumble (though it might be that European jet-lag has me aching for lunch at 10 am. This post was excruciating to write). Jessica’s observation was a good one – I have few photos of landmarks or things seen, but many photos of restaurants and dishes eaten. That’s the thing about Portland: there might not be that much to see, but there’s plenty to taste.