I’ve been reading a lot about Italy lately, in anticipation of an upcoming trip. Blog posts from my fellow Americans, mostly, about their thoughts on the country, and specifically Rome.

They all tend to center around the same themes: the city is crazy, the people are crazy, the traffic is crazy, watch your purse/wallet/bag, and I can’t believe this building/hotel/pasta is older than my country. It’s a perspective that’s not entirely unfamiliar to me: I am an American, after all, born and bred. But on top of those sentiments, there’s something else. Something strange that hits me whenever I go to Italy.

Keep in mind, I’ve never lived in Italy. The most time I’ve ever spent there was about 3 non-consecutive weeks in the summer of 2001. It is not that Italy, as a country, has ever been home to me. Rather, that my home, growing up – it was Italy. People shouted and spoke with their hands. There were grand gestures and waving and yelling interspersed with laughing. It was all in Italian, occasionally punctuated with a word or two stolen from English. 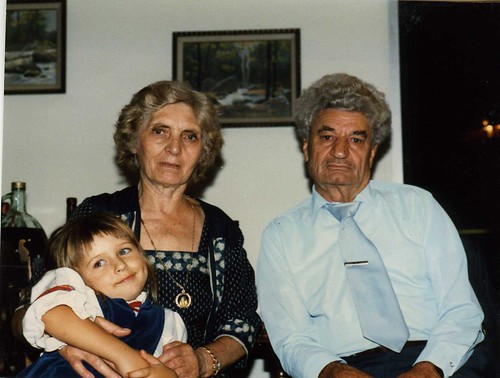 Yes, that's pasta sauce on my face. And I may have cut my own hair. Shut up.

It’s a home that’s lost to me now. Even my Italian mother, who came over to the U.S. just before I was born, leaves me phone messages in English, a stark contrast from my childhood, in which we spoke nearly entirely in her native language. The shift in languages happened slowly, and now that my non-English speaking grandparents are gone, we all simply default to English. The older I get, the further my family moves away from what it was. We try to hang on to it, somewhat in vain. My uncle struggles to teach his granddaughters Italian, but they have zero interest. They get frustrated and tell him they don’t understand what he’s saying, but he insists they must. The truth, as much as we chose to ignore it, is that our family has changed. It has become American.

That doesn’t bug me. I love being American. It’s who I am. But it’s hard to accept that in the process of my family becoming American, you lose something. Just a few months ago, I got further confirmation of this when I discovered I couldn’t get my Italian citizenship because my mother became a U.S. citizen before I was born. I had an entire lengthy and somewhat technical conversation with a gentleman at the Italian consulate in San Francisco, in Italian no less, on the subject. He smiled and told me that he could tell my mother was from Rome on account of my accent, and I resisted the urge to hug him. He sincerely apologized for not being able to help me more in my quest to get a European passport. It wasn’t that I had ever planned on living in Italy, or that I expected to work there, but still – I was disappointed. I just wanted to retain that part of my identity, to hang on to those people – a little longer.

But no matter how hard you try, sometimes when things are gone, they’re gone. Years back, I was looking through some photos with my cousin. We found some from Christmas in Seattle in the early 80s. I was only 3 or 4, the same number of years my mother and grandparents had been in America. My cousin had been in his early teens, and though in every picture he was smiling, he told me he remembered being sad. I asked him why.

“Because I knew it would never be that way again.”

It’s an acute kind of homesickness – when you miss a place that no longer exists. The accents fade, the recipes become less traditional, and subtitles are no longer needed at family dinners. Things are different now. Not necessarily better or worse – simply different.

But in a few weeks, I’m going back to Italy. I’m going back to where people shout and ignore the rules and refuse to speak English even if they can. Where no one stands in line. Where things are warm and welcoming and a little bit crazy.