L.A. is not home to me. It never will be, never could be. It’s dry and sprawling, full of sun-bleached buildings and strip malls. It bears no resemblance to the damp and mildewy place in which I live. But there are a handful of people I love who’ve managed to make Los Angeles their home, and so a few times a year, I head down there.

The term fish out of water isn’t strong enough. Try fish out of planet. It’s like the story of The Ugly Duckling if the duckling were, say, this little guy (and also, he never turns into a swan).  Me and Los Angeles? We make no sense. I fumble through the city, a squishy mortal in possession of her original nose and a pair of barely-D-cups which have proven themselves not impervious to the ravages of time.

I am not comfortable in Los Angeles, save for one place: The Getty Center.

There, I am at home. Perched on a hill above L.A., surrounded by visiting college students from Asia, clusters of German tourists, families, and a sprinkling of white-haired, opinionated old ladies from Jersey who hate everything, I am completely in my element. 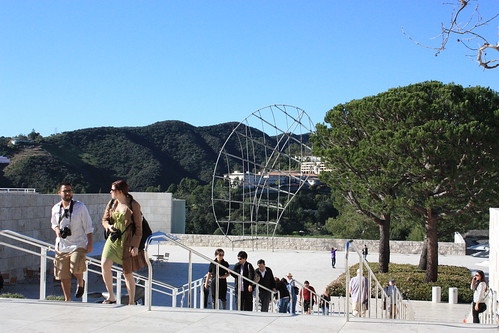 And all it took was a visit to one hell of a museum.

The Getty Center (not to be confused with the equally-impressive Villa) is located high atop a hill in Brentwood. It features mostly modern art and architecture, and lacks the emotional baggage of the its sister museum (the Getty Villa, which featured archeological items from Italy and Greece, whose governments demanded they be returned). It’s pristine and white, surrounded by vegetation, and utterly unlike anything else in L.A. No wonder I like it. No wonder I fit in there.

To arrive at the Getty from the museum’s parking lot (entrance is free, parking is a fortune), you have to take a tram up the hill. I was fortunate enough to ride with one of the center’s volunteers: a silver-haired woman named Betty who wore a silk scarf tied around her neck. She looked like a well-preserved flight attendant from the 60s. She gave me a bit of background about the area and the center – pointing out a vineyard on the hills in the distance, explaining how expensive the bottles produced from it were, and noting that expensive wine wasn’t really her taste.

“If someone bought me a glass, I wouldn’t say no,” she said with a twinkle in her eye. “But I prefer two-buck-Chuck.”

“Me, too!” I giggle. “I can’t appreciate the expensive stuff. My palate isn’t refined enough.”

And Betty nodded, knowingly. Like I said, I was at home.

Betty advised me to take an architecture tour, and as luck would have it, one was about to start. I (and a small international group of visitors) listened intently as our guide showed us around. She was quirky – a bit insecure, occasionally rambling, but kind of endearing. I stared at her, trying to figure out what about her was familiar, and as she walked, her hands thrust deep into her pockets, her straight hair swinging about her shoulders, it hit me: 20 years ago, she might have been me.

So … that was weird. Between Betty (who I’m fairly sure was my soul mate) and my tour guide, I began to wonder if the Getty was trying to tell me something about myself. Was I going to start shooting reflective surfaces all over the museum and talk about how it was like a window into my soul? Dear god, no. 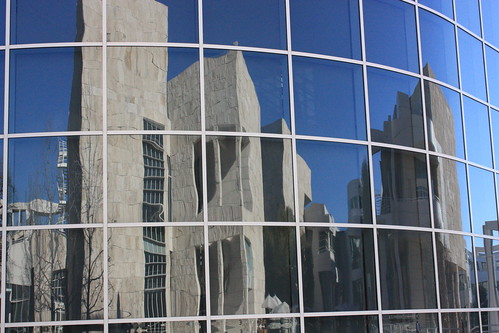 It's like a window into my soul. Or into the building. Whatever.

While I managed to keep my head on my shoulders, and convinced myself that the Getty was not sending me messages from the future about how I needed to become a docent and buy loafers (what? The guide had on cool shoes), it was quite moving. I spent most of my visit outdoors. It wasn’t that the exhibits and galleries weren’t fantastic (I peeked into the modern wing of the museum, giving the impressionists a quick glance, and looking at modern Asian photography in an exhibit overrun with gay Chinese middle-aged hipsters – AS AWESOME AS IT SOUNDS.), but was drawn back outside soon afterwards. It was too beautiful a day to spend too much time indoors. 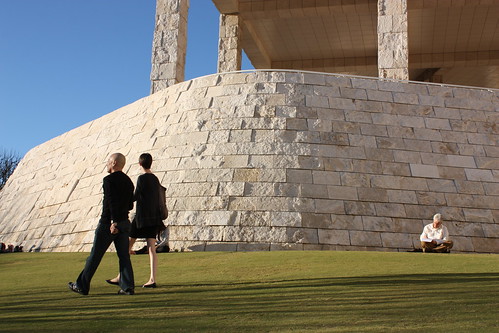 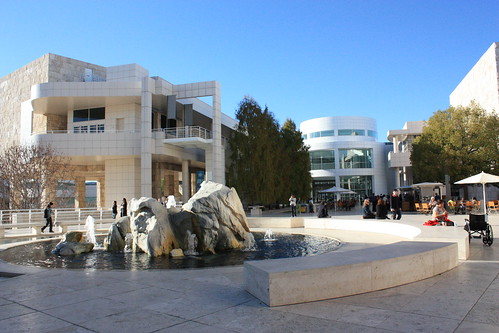 From the Center’s grounds, I felt like I was able to glimpse something rarely seen in L.A. – the city’s natural beauty. The Center’s structure highlighted this, creating a weird harmony between the city below, and the mountains and hills in the distance (the architect, Richard Meier, created his plans for the center based on two intersecting lines – one parallel to the I-5, another parallel to the Santa Monica mountains).  For a brief second, I started to think that maybe the city isn’t so big and sprawling and miserable. Maybe it’s an organized sort of chaos – a brilliant symphony of cars and lights and building and busyness, distilled into its simple essence at the Getty Center. 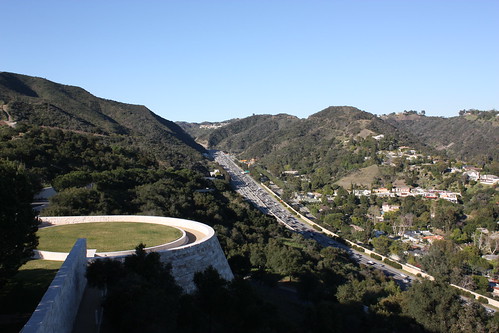 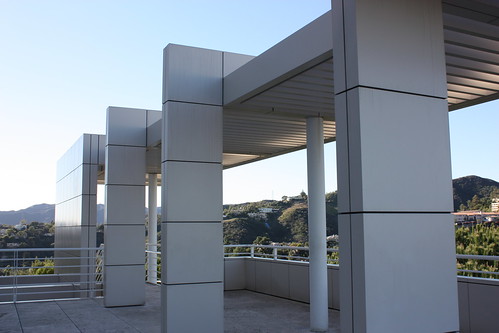 But then, inexplicably, the “exploding Death Star” that is Charlie Sheen popped into my head and I realized it’s all hogwash. But for a little while? I could appreciated the natural beauty of Los Angeles. And that’s a rare and special thing indeed.