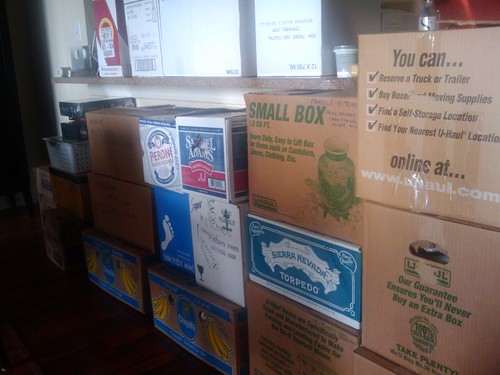 We got a ton of boxes from the local grocer. I'm sure the movers thought we were alcoholics ... who really like bananas.

Yeah, it’s been a while. And I’m sincerely sorry. Those of you who’ve followed the blog religiously for last year or so (to whom I say both “thank you” and “WHAT IS WRONG WITH YOU?”) know that this is out-of-character. My highly-developed sense of Catholic guilt combined with an over-achiever attitude and the fact that I usually have nothing to do, mean that I can blog usually 5 times a week. But the last month or so has been chaos. And when one is living out of a suitcase IN THEIR OWN HOME and wondering how many more days she can go without doing laundry (because who the hell knows where the laundry detergent is at this point), some things fall to the wayside. Like blogging. And laundry.

In the interest of full disclosure, I’ll tell you now: Rand and I have been, more or less, at each other’s throats.

Now, don’t go freaking out. It’s not a big a deal. It’s nothing we can’t handle. This blog post won’t be the first in a long list that leads up to a post announcing our divorce, possibly titled, “The Everywhereist Goes Solo” (though that is a cool blog post title, and I might use it for something else. So if you see it, don’t freak out.) It’s just that moving is incredibly, incredibly stressful, as I’m sure many of you know. And moving for the second time in two years, and the third time in four years, is exponentially more so (and we have the luxury of actually moving around in the same town, sans kids. Deanna, you have my life-long admiration and my well wishes. You are amazing.)

Making things even worse is the fact that Rand and I rarely fight. Like, ever. So even minor arguments seem like huge, front-page-worthy catastrophes. And believe me: when you are trying to figure out how to place a king-size bed in a space that is most definitely not designed for it, you will have arguments. Some of them will be minor. And some of them will involve screaming, “FINE!” and storming out of the room, even though things could not be further from fine.

I have learned one thing from the experience:  the “wardrobe experts” at IKEA are nothing of the sort. They will not solve your problems. They will not.

And perhaps more than all of this – more than the fighting and the stress and the chaos and the wardrobe malfunctions (as in actual wardrobes malfunctioning, and not, say, nipples slipping) – is that moving leads to a sort of introspection and self-awareness that isn’t exactly pleasant. It’s sort of like travel: you pack a version of yourself into a suitcase, and it is what you will present to the world. The people who will see you in  your far-off destination know nothing of the person you left behind at home. They know only what they see: someone who is apparently stylish and has it together and thinks nothing of dragging a tome of F. Scott Fitzgerald’s short stories across the globe because that is what she is actually reading right now. I mean, as far as they know. And if, say, there really is nothing to watch at 30,000 feet (and maybe, just maybe, you’ve already watched Tangled twice because you have a weird crush on Zachary Levi BUT OH LORD YOU WOULD NEVER ADMIT TO IT) you actually may read it.

But the rest of you? The rest of you remains safely at home, hidden from judgment and questioning. That version of you can wear ill-fitting pants and eat mini Cadbury eggs all day and never have to think about the ramifications of it. Except of course, when it comes time to move. Then, you are forced to look at who you are – who you really are – and not just who you pretend to be while on vacation. You can’t leave your real self at home, because there isn’t a home at which to leave it anymore. Everything that you are is reduced to piles and piles of boxes and impossible questions.

Questions like: will you ever paint again? No, seriously. Will you? Because let’s face it: you are not a stellar painter. There are other things you could be doing with your time. But as you attempt to throw your paints and brushes and palettes into the Goodwill pile, you think, just for a second, that maybe you will.

And those volumes of Anais Nin’s diary – are you even going to read those? If memory serves, you only bought them because your college roommate was going on and on about them, and you were feeling intellectually insecure. But are you actually going to sit, in the black pencil skirt that you’ve never worn, and those 3-inch grey suede heels (why did you buy those? Really? You “work from home” and you live in one of the rainiest parts of the country. There is no reality into which those shoes can fit) and read Anais Nin’s diary, especially when you HAVE NO IDEA WHO SHE IS and the most you’ve done to find out is read a Wikipedia article?

No. No, you aren’t. So you toss out half the paints, and Nin’s work and the pencil skirt (but you keep the shoes because they’re really nice) and you wonder if you’ve done the right thing and you begin to regret that you aren’t the sort of person who could do all those things. And all of this leaves you, just a little bit, rattled to your core. And you end up fighting with your husband. And crying in what is supposed to be your new office, but in its present iteration is really just a repository for empty cardboard boxes and extra furniture.

And amidst all this chaos, I keep thinking, I want to go home. It’s not unlike how I feel when I’m overwhelmed while traveling. But then the realization hits me that that home doesn’t exist anymore. It’s already gone – packed up in boxes that are threatening to smother us while we sleep. I wake up in a strange place, I fish my clothes out of a suitcase, but I am not on the road. Not even close to it.

And the only constant, amidst all of this? The only thing to remind me that I am, in fact, home? 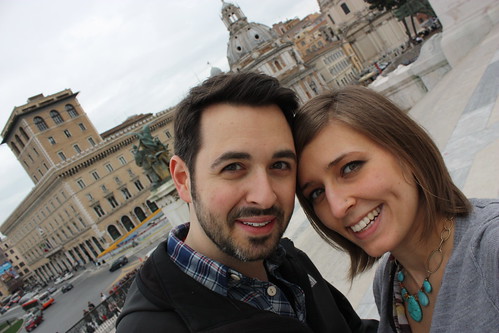 The great love of my life. But based on the last few weeks, you’d think my pet name for him was, “WHATEVER. BE THAT WAY.” So you’ll forgive me if the blog is a bit neglected. I’m working through an identity crisis over here. I’ve realized that who I am on the road is who I want others to think I am. And the things I file away at home – the elegant heels, the ignored art supplies, are who I’d like to be. And the fighting with my husband? It fits into neither of these realities. It might be time to pack that one up, for good. Or, at the very least, until the next move.