There comes a point, when traveling, that you simply cease to care. You may find that everything in your suitcase inexplicably smells like sauerkraut, or that you are sharing a train car with a guy who you are absolutely certain has a hacked up body in his bag, and provided none of those things prevent you from getting to your next hotel/shower/meal, they do not bother you at all. (If they do threaten to come between you and your destination, beware. I’ve gone from exhausted and apathetic to crazy-ninja-attack-mode in 3 seconds).

In my personal experience, it takes me roughly six or seven days on the road to reach a point of imperviousness. After that, my response to most things is, “meh.”

Packing mishap has led me to wear the same pair of ill-advised skinny jeans for 6 days in a row? Meh.

Inexplicably on a subway to Queens, when I really meant to go to Chelsea? Fine. I’ll check out Queens.

Accidentally found ourselves eating baby horse (after a translation mishap in Venice)? Whatever. Pass the eel (yes, we also ordered eel. Many mistakes were made on that night, long ago. It was awesome).

All it takes is six or seven days on the road, usually. That’s all it takes for you to be so exhausted, or worn out, or jaded that you become a little bit invincible. But I’ve found that both Rand and I can reach this state of not-giving-a-rat’s-ass much sooner if we’ve taken several trips in a row. On our last venture to Italy, sandwiched between several other trips, we found ourselves not caring after roughly 24 hours. It why was, when we entered our hotel room  in San Marino and saw this, that we didn’t freak out: 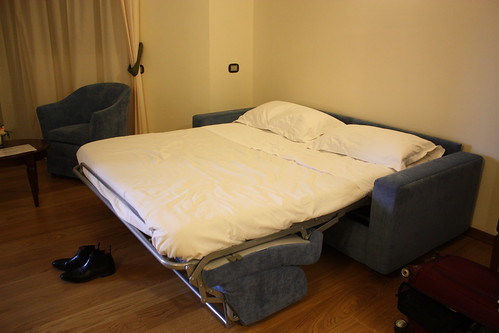 Rand and I stared blankly for a second at our fold-out bed.

It was kind of liberating, actually.

“I’m going to take a shower,” I said, wandering through a doorway at the left, which I assumed led to the bathroom.

“You know there’s another room in here, right?”

In our state of not giving-a-crap, we hadn’t noticed it. Our suite had a sofa bed in it, and because it was pulled out and made, we assumed that was our bed. In reality, we had an entire other bedroom (complete with a real, non-convertible bed) at our disposal.

Rand decided to test it out, immediately. Fully clothed. Possibly while still wearing his shoes. 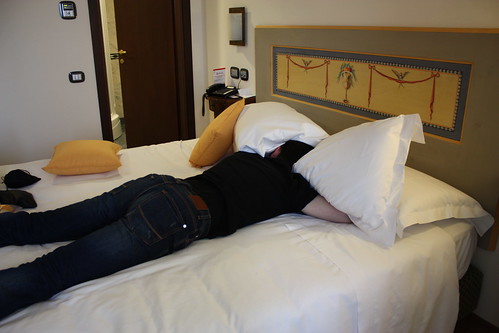 And not a single f#ck was given that day.