TV outside of the U.S. is such a treasure. After spending the whole day roaming around a foreign city, sampling a dozen or so local desserts (for journalistic integrity is at stake, and if you do not try them all, Fox News wins), and getting lost at least twice, you return to your hotel room, exhausted, and out of habit, you plop down on the bed/chair/holy-crap-our-hotel-room-has-a-couch and switch on the telly.

And that is where, depending on your geographic location, things will land somewhere on the spectrum of completely familiar to bat-shit crazy. Nowhere is this more true than Italy. Are there stranger television programs in the world than those found on Italian networks? Absolutely. But they are often in languages I don’t understand, and so their mysteries remain locked (we’ve watched ourselves on Japanese TV numerous times. We sincerely haven’t a clue as to what any of the screaming, animated angels, and Whitney Houston background music was all about). But in Italy, I speak the language. I know at least some of the local celebrities. And often I have a relative nearby who can put things into a cultural context for me. And still? Despite all of that?

Even American shows are dubbed and changed in ways that render them remarkably different (I’ve talked about House before. Hugh Laurie’s voice, stilted and whiny when attempting an American accent, is dubbed over into something fluid and velvety in Italian. It. IS. Awesome.) There’s also an abundance of truly bizarre cooking and variety shows, usually mixed in to regular programming (because, really, why bother watching a television show or movie all at once, when you can stall it for 10 or 20 minutes at a time and learn about baccala? I’m convinced that somewhere in that is the root of why my mom can’t sit still through a 2-hour film. But I digress).

And believe me when I tell you that speaking the language will not help you at all. Behold the special guest chefs on a program I found myself watching in Rome: 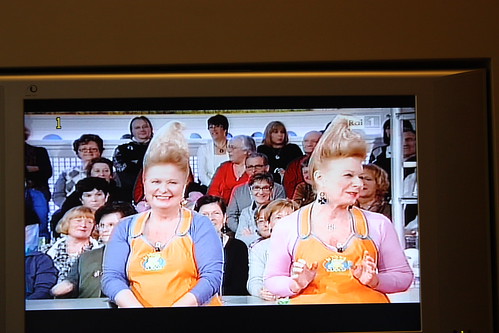 Everything about the show was entirely normal, save for the fact that it was aired during another program and the WOMEN clearly have coifs inspired by Dr. Seuss. Okay, fine. Surely there is some explanation for this, right? But no. Nothing. No one even mentioned the hair. They all quietly ignored it, and went on talking about rigatoni for 15 minutes or so (I am not kidding). Rand, hoping I could shed some light on the subject, asked me what, exactly, was going on.

I never did get any explanation for the hair. Eventually, I changed the channel, found a game show, and promptly started giggling maniacally in the delight. I explained to Rand that Italian game shows are 20 minutes of sexist, fascist delight – not only are they designed, by completely arbitrary means, to ensure that winning any amount of money is near impossible, but they often feature girls in skimpy clothing occasionally reading questions or dancing. About halfway through a show that’s somewhat similar to The Weakest Link crossed with Who Wants to be a Millionaire (did I mention that Italian TV is also trapped in 2002?), this came on the screen: 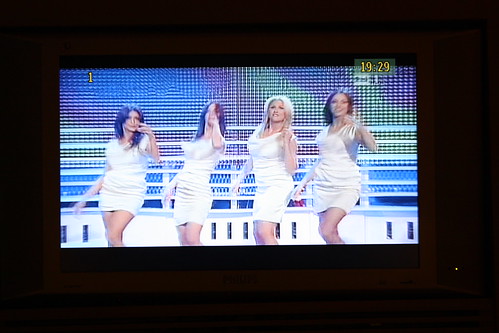 I love it. Four brunette dancers, one of whom has blond hair.

And again, no explanation whatsoever. The host just announced that it was time for the lightning round, and then music started and the girls appeared and began dancing. I died.