It is midnight right now on the east coast, and I am way too excited to even think about sleeping. And while there are plenty of other posts which I should, chronologically at least, get to first, I have to tell you about this evening. Because tonight, I did something that I had never done before.

Tonight, I drove in Manhattan.

Driving in the largest city in North America has never been on any of my to-do lists. Like using exact change or playing the piano, it is a skill I admire in others, but one that I have never endeavored to cultivate in myself (Note to my mom: sorry about all those piano lessons you had to pay for when I was in the fourth grade. My heart was never in it. Now you know).

And it all happened rather by accident. Rand and I left dinner with some colleagues and friends, and, owing to a bit of temporary insanity caused by eating a deep-fried Oreo cookie, I offered to drive. I can only assume that when heated to such extreme temperatures, the white cream inside those little sandwich cookies begins to take on qualities not unlike LSD. The only difference was that while LSD causes people to think they can fly (out of, if the after-school specials I watched as a child were correct, four-story buildings), this confection of white goo and chocolate cookie with a doughnut for a wrapper had me convinced I could drive. I was under the crazed impression that I could get behind the wheel of a rental car in Union Square without wreaking some serious havoc on the streets of New York.

And oddly enough, I was right.

Granted, I nearly hit some guy on his bicycle as I pulled out of the parking garage, but I’m pretty sure he was high or something. Probably off the deep fried Twinkie we saw on the menu but didn’t order.

I pulled the car onto twelfth, and in the process did something that many people who live in New York for their entire lives have never done (It was official now. I was driving in New York. There was no going back). While I’d like to think I was the picture of grace under pressure, I may have lost it a little when Rand gave me driving instructions exactly two seconds after I needed them. (Him: “Okay, you need to turn left. I mean right. You need to turn right immediately.” Me: “YOU ARE WORSE THAN HITLER.”).

Soon, though, I was gliding down city streets that were, owing to it being a Monday night, largely empty. This was fortunate, given that the lines of demarcation between lanes were virtually non-existant.

“I can’t tell what lane I’m in,” I said, suddenly panicked.

His words echoed in my ears, and quickly became my mantra. I was suddenly confident and in control. I was driving. IN NEW YORK CITY. Clearly, the only respectable thing to do was let this new sense of power and competence go straight to my head.

“Take a picture,” I ordered, and my dear husband did.
– 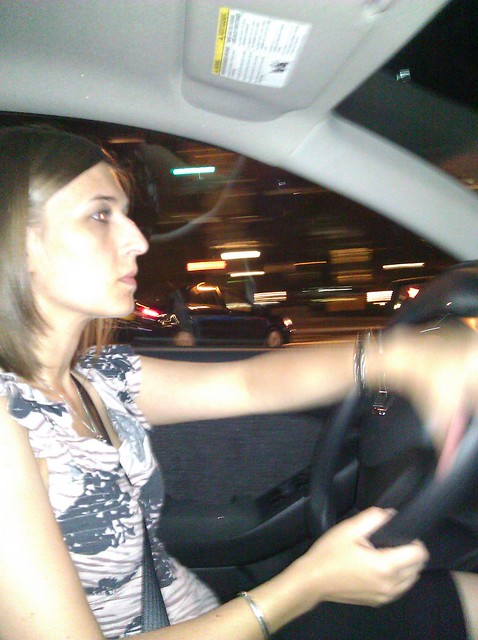 I did not say it was a flattering picture.

–“Tell me where to go next,” I demanded, and once again, Rand obliged.

“Take the Holland Tunnel,” he said, meekly, clearly afraid of what I was becoming.

Like so many other things in life, I nodded knowingly, even though I hadn’t a clue where the tunnel was. Since it seemed like an important detail, I decided to inform Rand.

“Where’s the tunnel?” I asked.

“What in god’s name are you talking about? IT IS NOT IN FRONT OF ME OR I WOULDN’T HAVE ASKED.”

Courtesy of Wikipedia, which apparently is good for something after all.

I gently implored my husband to take a photo of this phenomenon, but he could not as he was busy looking up directions to get us home. So you will just have to imagine it. It strongly resembles the entrance to a parking garage (ignore whatever Rand or anyone else says to the contrary).

And so, I took the entrance to the tunnel, and just like that, it was over. We were in the Holland Tunnel, miraculously traveling under the Hudson River (a concept which I find baffling. How, pray tell me, how is the tunnel not crushed by the weight of the river? How does water not start bursting through at all the seams? My best workable theory is currently “witchcraft.”). We left Manhattan behind us, and I felt a twinge of sadness that our adventure was over.

As we zoomed down the smooth expressway, a green street sign above us caught my eye. It combined two words one never wants to see together. The first one was “Jersey” and the second one was “Turnpike.” I squeezed the steering wheel so tightly that my knuckles turned white. My mantra vanished from my brain like a disobedient child into the crowds of Times Square. Though I’d been on it a dozen times, and though I really should have known better, the concept of being on the Jersey Turnpike terrified me. I was convinced ever other car was filled with the driving equivalent of Tony Soprano.

“I just overtook that guy,” I told Rand. “I am pretty sure he is going to murder us.”

“OH MY GOD, HE JUST TURNED ON HIS BRIGHTS. THAT’S THE FIRST SIGN THAT YOU ARE ABOUT TO BE MURDERED.”

And as the screaming commenced, so did another adventure. I was now driving on the Jersey Turnpike. After driving in Manhattan. We made it back safely (Tony must have had a fit of conscience. Or he was out of ammo), and I find myself, in the middle of the night still full of fried Oreos and adrenaline. Is it any wonder, then, that I cannot sleep?