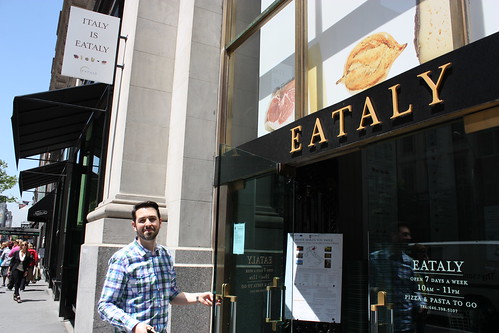 The sign behind my husband lies. Italy is not Eataly, nor vice versa. But it's still damn good.

My cousin’s village in Italy is a relic of the sort you rarely see outside of Indiana Jones movies or PBS-programs narrated by David McCullough. It winds up a hill, dotted with ancient stone houses, now conveniently equipped with electricity and spotty hot water. The local children, carrying heavy monikers of saints or artists, call to one another as they play amongst centuries-old ruins.

And yet, when my family came to visit America, leaving the homeland of Michaelango and Leonardo (and all the other great artists for which ninja turtles were named), they wished to do one thing: shop.

In comparison to the dusty history of their home, the expansive malls and grocery stores of the United States were a sight to behold. They were new and briskly air-conditioned, full of rows of glittering items with reasonable prices that ended in .99. My cousin would explain to me that so many groceries I took for granted – Crest toothpaste, Lucky Charms, Nestle Quik- cost a fortune in Italy. I’d run down the aisles of our neighborhood supermarket with a new appreciation for the sugar-laden products of my homeland, marveling that I could have Frosted Flakes without having to shell out $12.

Last month when Rand and I (along with his grandparents) visited Eataly, New York’s Italian food emporium, I could not help think of the magic with which my relatives regarded grocery stores in the states. Because while Eataly may have a predecessor in Torino, while it may be run by Italian culinary giants (like Mario Batali and Lidia Bastianich), and while it may profess to specialize in the cuisine of my ancestral homeland, one thing was clear when we stepped inside: this place, much like snack cakes with disturbingly long shelf-lives and square dancing, this place is America. 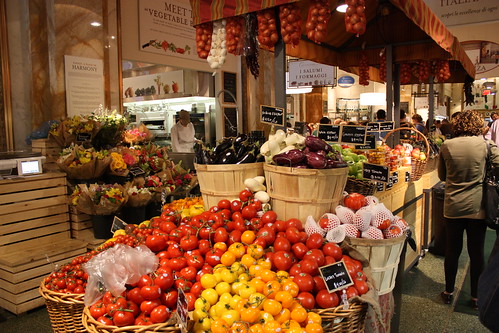 More varieties of tomato than my brain can process. 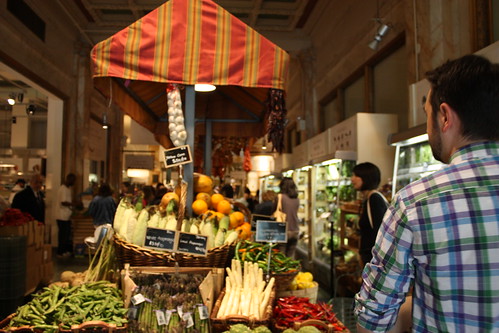 My husband spots white asparagus and manages not to giggle. 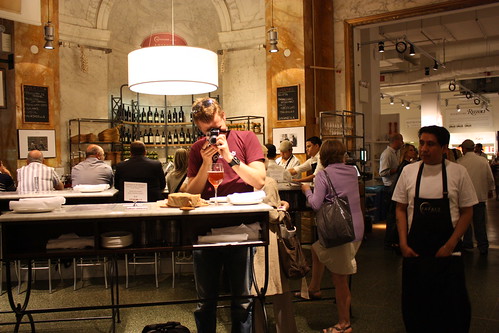 In Italy, stores are specialized to a ridiculous degree: my aunt and uncle will often make an afternoon of grocery shopping, walking from the butcher to the baker to the pasta maker. I’ve seen shops dedicated entirely to prosciutto (if they tacked on a shoe store and a pasticceria, I would politely ask if I could live there). The few enormous retailers that exist have a European restraint when it comes to food, offering condiments in tiny bottles. This is in stark contrast to the U.S., where mayonnaise is seemingly only available by the gallon. The selection in overseas grocery stores also proves itself far more limited on many occasions, because someone had the presence of mind to realize that a consumer does not need to choose from five different brands of sodium-free garbanzo beans, and that just one or two will be sufficient.

This is not the case with Eataly.

Nothing about the place feels quaint or European. It occupies an entire floor of a building across the street from the Flatiron – 50,000 square feet full of groceries and restaurants (I spotted no less than five sit-down places to eat inside, not counting a gelateria). The selection of food is somewhat terrifying. I’m certain many a poor soul has spent long hours there, trying to figure out whether penne lisce or rigate were right for their recipe, and eventually gave up, instead choosing to dine on on a bowl of Kraft Mac n’ Cheese (and frankly, that’s understandable). 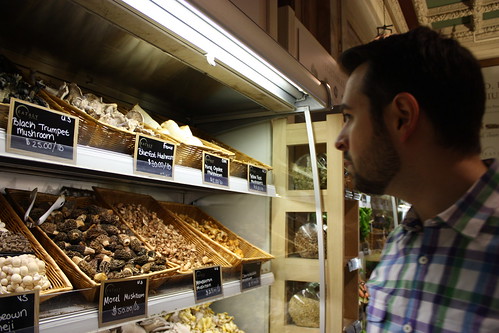 Fun fact: My family back in Italy does not buy mushrooms. They pick them. Also, the walls in their homes often melt. Unrelated, I'm sure.

Perhaps serving as poetic justice for the prices Europeans shell out for American-style groceries, Eataly is no bargain market. I walked by $20 torrone and clutched my chest in a feeble attempt to still my heart. The message was clear: traveling from Rome to New York is not cheap, whether you’re a person or a nougaty confection.

I found that everything around me was almost familiar: I could read labels and pronounce the names of foods, and yet it was all slightly off. Even the items that had been directly imported from Italy didn’t seem quite right – as though something happened in their long voyage over the Atlantic that made them forget their roots. These Italian foods had emigrated.

Now, all of this aside, Eataly is still a rather remarkable place. Something doesn’t have to be 100% authentic to be enjoyable. Take Astroturf, for example. Or the city of Los Angeles. Where would America be without these two great homages to the unnatural? I shudder to think.

We arrived in the early afternoon on a weekday and found the shop packed with customers. There were children sticky with gelato, well-dressed unbanites buying prosciutto, cooks with sauce-stained aprons, and conversations a decibel or twelve higher than they needed to be. The chaos we encountered was perhaps the most Italian thing about the entire place. 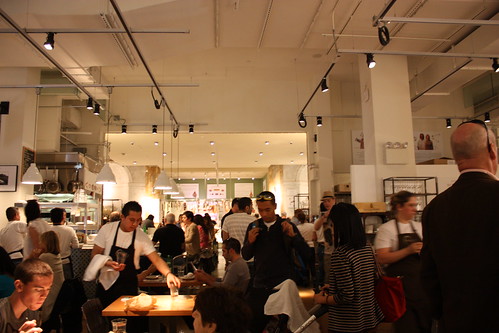 This is after the rush calmed down a bit, actually.

We split up to cover more ground. Rand headed to the gelato stand, to wait patiently in a line so long that it had its own velvet rope.  As any gelato snob will tell you, it should not come in tins like this. 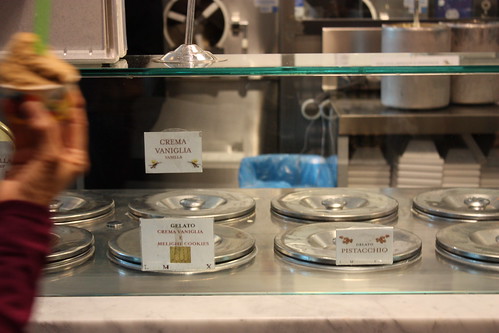 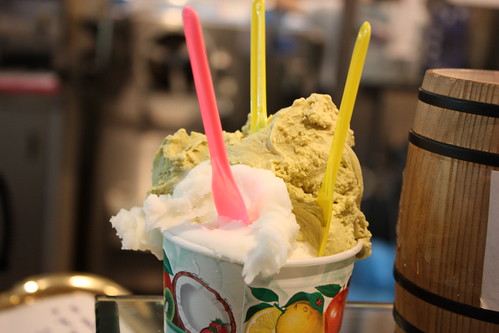 Rand ordered a pistachio gelato and a lemon sorbetto. The pistachio was superb. Creamy and light and perhaps slightly firmer than gelato should be. The lemon was merely good – the texture wasn’t perfectly smooth, with harder ice chunks here and there. They didn’t compare to my uncle’s, but they’re still a far site better than anything else I’ve found in New York.

While Rand’s quest for frozen deliciousness was happening, I darted from restaurant to restaurant, adding my name to lists and trying to discern which one had the shortest wait (yes, this means we ate gelato first. Don’t judge me). Manzo, I easily dismissed as it cost a fortune and one needed a reservation. Le Verdure was entirely vegetarian, and the menu looked limited. Ditto for Il Pesce (“The Fish”). La Piazza was not even a contender, because I couldn’t find it (it very likely may be fictional).

I opted for the pizza and pasta at La Pizza & La Pasta (Note: everything in life should follow this naming convention. I could write a bestseller if I only titled it A Travel Book.). The  menus offered the most variety, the prices most affordable. The hostess originally quoted us a 45-min wait time, but as more and more parties ahead of us on the list were lost to the allure of the store (perhaps, forever), we found ourselves seated in less than half that time. I highly recommended patiently loitering near the hostess’s table, with two charming octogenerians in tow. You will not wait long.

Though the seating area was the same, the pizza and pasta were prepared in two different kitchens, and came out at drastically different times. Our waitress, an upbeat and competent gal, had warned us of this, and so we decided from the start to split all the dishes, having numerous small courses.

The first course, a salad of sliced asparagus and fava, dressed in lemon juice, olive oil and grana padano was surprisingly good. Everyone’s first bite was incredibly civilized, until the deliciousness hit our tongues. Then it became Lord of the Flies: The Later Years. 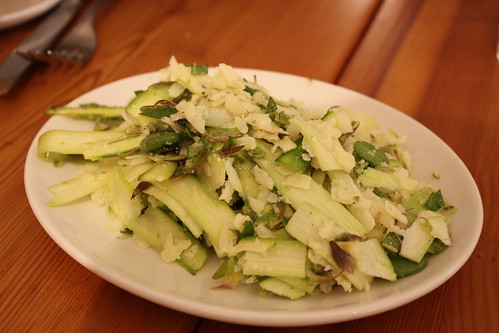 Someone might have gotten slapped over the last bite.

We ordered cacio and pepe pasta, and I hesitated to tell Rand’s grandmother what it was, because how could I justify getting such a simple dish? So I waited until everyone tried it before confessing that it was basically butter and cheese and a sprinkling of pepper. It’s one of my favorite dishes – salty and simple and oily- and I had been craving it. While not spectacular (and understandably inferior to the one I had at the Peroni Brewery in Rome), it was still solid and beautifully cooked. 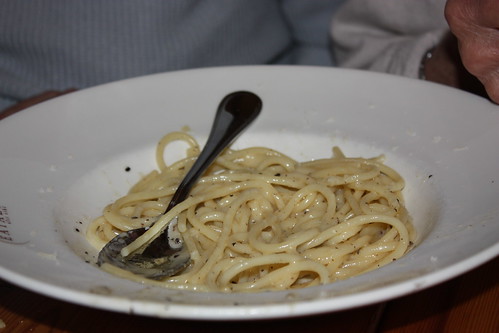 Next up came the Agnolotti Del Plin – a type of filled pasta (not entirely unlike ravioli) that’s common in the north. Considering the meat filling, they were surprisingly mild and light in flavor. 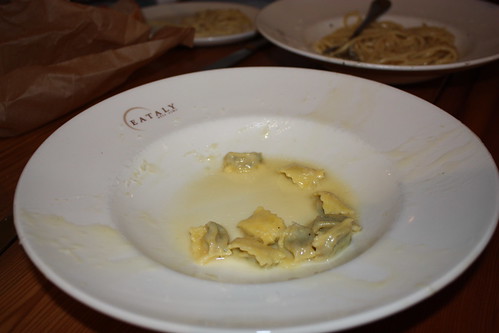 We gobbled them up before I had time to take a photo.

By the time the actual pizzas came around, we were starting to get full. That in no way stopped us from eating all of them. We ordered the Pomodorina (essentially a margarita pizza) with mozzarella, baby tomatoes, and basil: 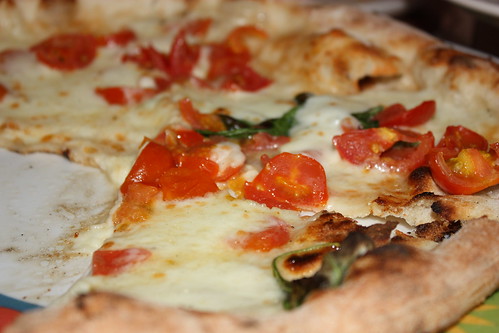 And the special of the day, which had prosciutto crudo, arugula, and fresh ricotta. 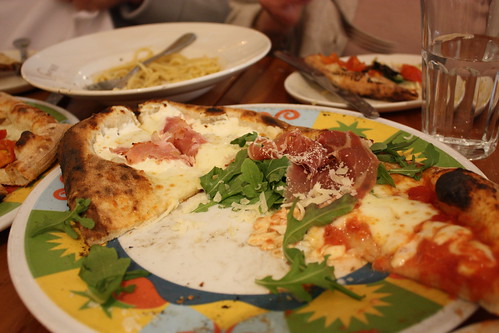 I am suddenly starving.

In retrospect, I think we should have skipped the pastas and gone straight for the pizzas. The dough was delightfully chewy with spots of charred crispiness. The toppings slid off every slice due to a generous drizzle of olive oil which managed to make it unctuous but not overly greasy. It brought me great joy and I wish I were eating a slice right now.

We left Eataly, full and happy, and it did not escape my notice that we had just had a multi-course afternoon meal at 3pm – a practice that is truly Italian. Eataly may not be entirely authentic, with its lidded-vats of gelato and sprawling aisles full of over-priced groceries. Its cuisine might not be entirely-by-the-book, and perhaps borders a bit on a pastiche of what we believe Italian food to be. But in the end, so what? We found it didn’t really matter – it was just good.

And as any Italian will tell you, that’s all that really matters.

The Essentials on Eataly: