Remember yesterday? I mean, if you don’t, that’s fine (but we should probably address that, because it means that you either need to have your hippocampus checked, or you’ve been having way too much fun without me). Anyway, yesterday I made some rather bold statements about how Covent Garden was just a cheap rip-off of Pike Place Market, and how Londoners were just Seattle wannabes.

I might not have entirely meant all those things. It might be that a few of those words were uttered in jealousy. Because while no place in the world will ever compare to the overcast paradise that is my hometown, London has one thing that Seattle lacks: a stellar underground public transportation system.

It’s not to say that Seattle hasn’t tried. We have. And we’re getting there. But still, deep down, I’ll know this: no matter what we come up with, it will always pale in comparison to London’s Underground.

Because the Underground is a thing of magic. Is it crowded? Sure. Hot? Absolutely. And in the past I might have been aggressively approached or cursed at by my fellow passengers. But those issues aside, it’s remarkably organized, efficient, and will get you anywhere you want to go in the city for a ridiculously low fee. Even a girl like me (who literally got lost on her way to the grocery store this morning) can navigate it with aplomb.

It is this deep rooted affection for the Underground that prompted me to visit the London Transport Museum. If you are a fan of public transportation (and come on, who isn’t?) or just city planning in general (Um, hell yeah!), or if you just love mannequins in bad 70s wigs (Guilty!),  I suggest you go. The museum has all of that, and more.

It’s located in Covent Garden, in a building known as the Flower Market (which once housed London’s wholesale flower business).  It’s enormous and rather lovely, and it’s easy to imagine scores of people arguing over the price of pansies back in the day and throwing zinnias at one another (fact: I have no idea what goes on at a wholesale flower market). 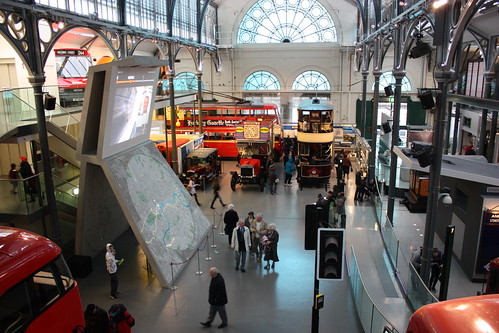 The museum is filled with relics of London’s various public transportation systems over the years, and the examples range from the downright strange up to the familiar. You’re able to travel through the centuries up to present day, seeing exactly how people got around.  This contraption, known as a sedan chair, could be rented for short trips around London, but were largely exclusive to the wealthy: 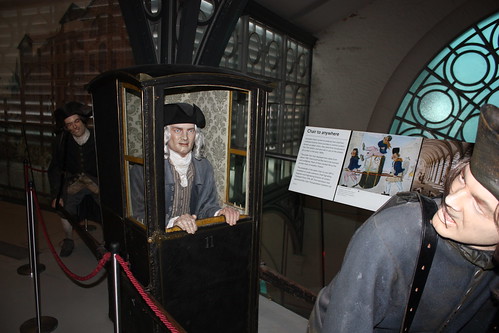 I can totally see Lady Gaga riffing on this idea.

In the 1800s, the city got omnibuses (later called simply “buses”), which were pulled by horse, and made the entire city more accessible for everyone. Incidentally, the idea for omnibuses came from the French. Which I’m sure would be a delightful way to get you into a fight with an Englishman – just tell him that his city’s greatness is due to those snobby brie-eaters and fists will FLY! (Incidentally, I’m just being cheeky. I have no gripe with the French. I do have a checkered past with Air France, but that’s another issue). 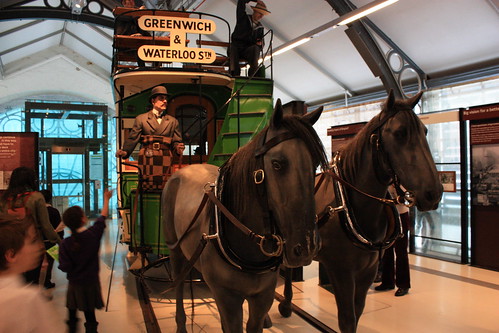 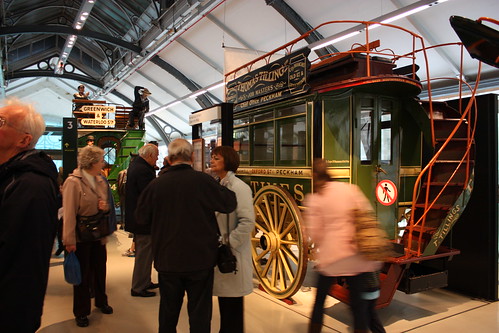 On such a miserable, rainy morning, it was a fantastic way to pass a few hours. And evidently a lot of people had the same idea. The place was packed, even though I arrived just as it opened. By the time I reached the trains, I was elbow to elbow with dozens of mothers trying to take just one decent photo of their respective children. They eyed me with a mixture of envy and pity: “Oh childless one,” their eyes said, “you know not the joy of offspring, but your clothes are blissfully frosting free.” And the latter was true, but only because I had yet to find a cupcake shop.

Where was I? Ah, yes. The trains. Entire locomotives have been reconstructed inside the museum: 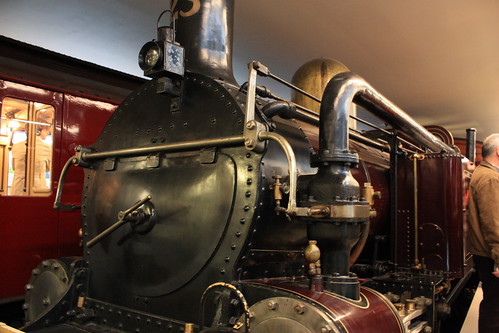 Along with commentary on some of the people who worked behind the scenes: 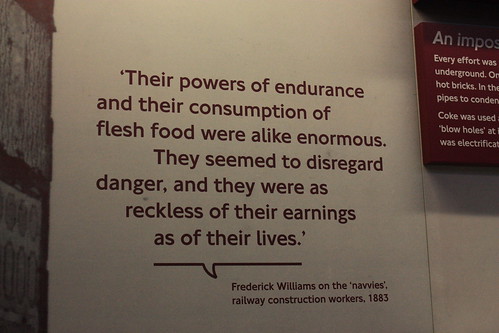 This killed me. I love the English. 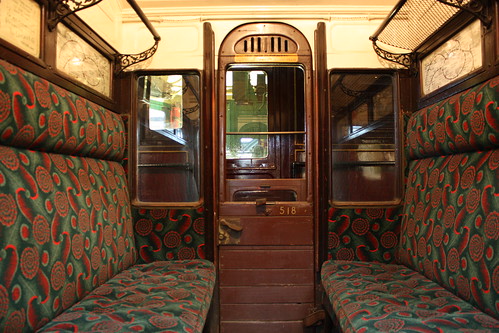 In the U.S., anything older than 20 years is antique. Consequently, I was freaking out.

And for the sake of historical accuracy, depicted a gentleman frantically opening his window after his fellow passenger farted. 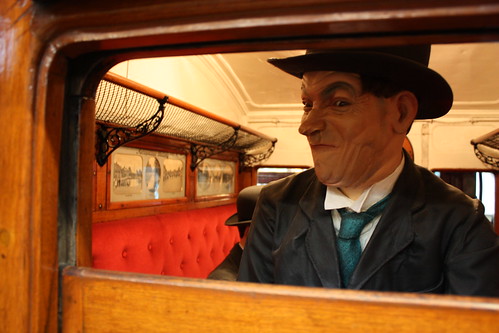 But I’m skirting the issue, aren’t I? I promised you 70s-era mannequins, did I not? Let no one say I don’t deliver on my promises. As I progressed through the museum, I eventually got to the bit about the Underground. And like the train exhibit, they had installed entire subway cars. And those cars had passengers.

AND THOSE PASSENGERS WERE 70s ERA MANNEQUINS. 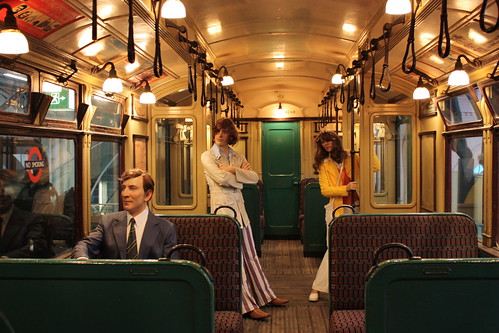 What's that? I can't hear you over the sound of HOW AWESOME LIFE IS. 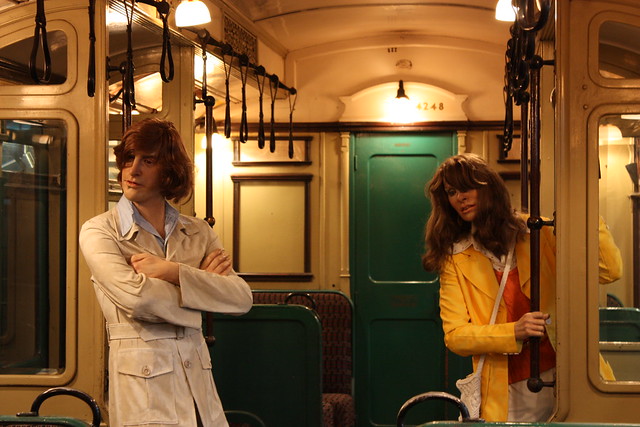 On the right, Sofia Loren. On the left, the love-child of George Clooney and Danny Bonaduce.

Of course, the Underground predates the 70s by nearly a century, but some brilliant curator realized that the best decade to portray would be one in which grown men wear striped red-and-white pants. And that was a wise decision. 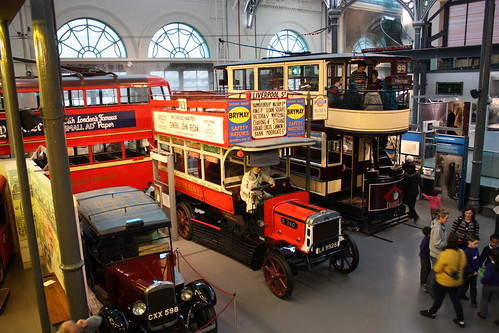 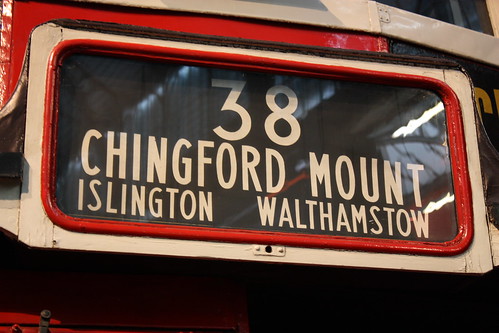 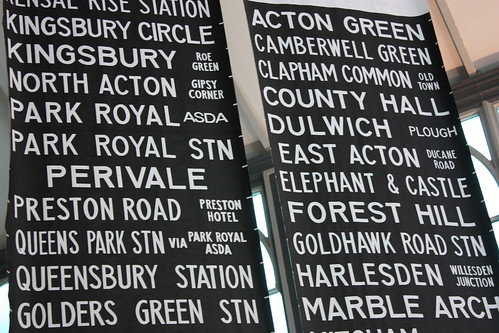 If you plan on going, give yourself about an hour an half to see the entire museum. And while I never, ever recommend this, I’d suggest giving the gift shop a gander, too. It’s full of all sorts of delightful transportation-themed stuff (which, admittedly sounds weird, but was really cool. Imagine old subway maps and posters). My one regret was that I wasn’t able to visit the Depot where they house all the parts of the collection which are not currently on display (you can only visit during a monthly guided tour).

If you are at all fan of city planning, transportation, or London in general, I’d say visit. That goes double if your fascination of mannequins is anything like mine.

The Essentials on The London Transport Museum: