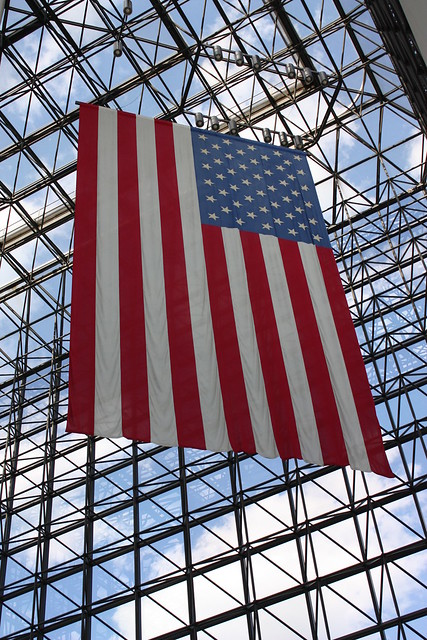 At the Kennedy Museum near Boston, MA.

It’s the Fourth of July, and while I had told myself I would be taking the day off to get drunk and eat hot dogs, because that’s what our founding fathers would have wanted, I instead find myself thinking about what it means to be an American. How centuries ago we split from the British and formed our own little country (well, not we, exactly. My family was happily toiling away and drinking in Europe. They wouldn’t get to the states for another 204 years), with its own cultures and tendencies that are so radically different from the English. Even the Canadians, who are so damn close to us, are strange and exotic in my mind, largely because they are subjects of the queen. As an American, queens are relegated to fairy tales, decks of cards, and pride parades. They are not heads of state.

As much as I hate to admit it, in my younger years, I would get a little down on the U.S. I thought that in order to be an enlightened American, you had to denounce your home and fellow countrymen. In college I’d eat sushi to a soundtrack of Brit pop provided by my roommate, and would field phone calls from my mother, loudly and entirely in Italian, so that everyone would know I was different and cultured and not merely from Seattle.

The scene in Love, Actually where a Hugh Grant plays the Prime Minister and goes off about how the U.K. is better than America did not help at all. Nor did the Bush administration (yeah, I’m a liberal. Like you didn’t know). Nor that crush I had on that Swedish foreign exchange student who had a superfluous “s” in his last name. I thought being American was crass and loud and clumsy. The Felix Leiter to the rest of the world’s James Bond.

When I started to travel, I assumed these feelings would intensify, but I found the opposite was true. I got a few negative cracks about being from America here and there, but for the most part, I found that being from the U.S. wasn’t the terrible thing I made it out to be. My accent, I was told, was charming. I looked just like Jennifer Aniston! (This, too, was intended and taken as a compliment. Just go with it.) New York was the greatest city in the world! (I wholeheartedly agreed, not having the heart to tell them I wasn’t from there). Plus, we got movies as soon as they came out, and didn’t have to wait six months for new TV shows to air. And the U.S. is home to barbecue, all-you-can-eat-everything, and fried chicken with waffles. In the common parlance of my motherland, life here kicks serious ass.

Of course (in what may be the understatement of the year) our past is checkered: there’s slavery, the almost-complete eradication of Native American culture, and our tendency to try fixing a hostile political situation by, um, bombing it, but I PROMISE WE’RE WORKING ON THAT STUFF. I mean, New York just passed gay marriage. Give us time.

I’m just saying being an American is pretty darn alright. It gives me new appreciation for the struggle for independence our founding fathers went through all those years ago. Save for one thing: we gave up tea and cake.

Yes, we gave up cake. WILLINGLY. When a group of revolutionaries, angry at the taxes imposed upon them by the British, stormed boats on Boston Harbor and hurled the cargo of tea overboard, they started something. The revolution, sure, but something else, too. They started THE END OF CAKE.

Wait, did that make sense? Whatever. It’s a holiday.

For many colonists, it ended the practice of drinking tea that’s so common in England. This, in and of itself, is a loss, but not a great one. The true tragedy is what we lost along with it: we lost cream tea, high tea, scones, and (sniffle) cake. Because if I understand England at all correctly, at roughly four o’clock everyone stops doing anything, and they sit down for a warm cup of tea and some adorable little cakes or scones or biscuits, and those who do not comply are killed.

Now, while I prefer my cakes of the cup- variety, with a huge mound of frosting that’s just developed a crust, I will take scones in a pinch, especially if they are provided daily. The ones we’ve had in the U.K. are not like their brittle, crumbly counterparts in the states. They’re closer to a sweetened buttermilk biscuit. Soft inside with browned edges, ready to be sliced in half and dolloped with … clotted cream? 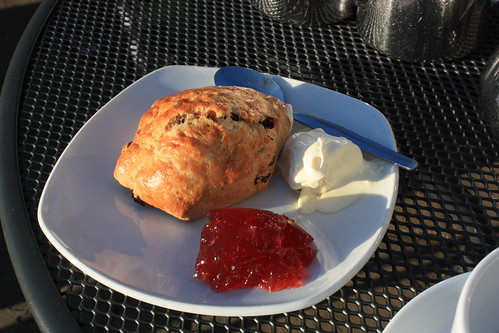 Okay, the name is terrible. I’ve said it before: “clotted” should never be used to describe anything edible. But it’s basically halfway between butter and cream. And then you spoon some jam on top (or vice versa, depending on your preference) and you gobble it up with a warm cup of milky tea. Sure, it’s no cupcake, but you can have it EVERY SINGLE DAY. You can pop into any number of tea shops that dot the country and order cream tea, and they will bring you a seemingly inexhaustible supply of both tea and scones, served on adorable floral china alongside silver flatware. In American, there is no way this business plan would work – tea houses would be eaten into bankruptcy in a matter of weeks (I’m not being disparaging. We like our money’s worth, is all). But in the U.K., they’re everywhere, and sometime around 4 o’clock when you start feeling peckish, a tea shop will magically appear and all will be right in the world.

This is what we gave up in order to have everyone on sitcoms talk like us, and not have our language peppered with superfluous “u”s when a simple “o” will suffice (“colour”? That’s just a waste of a vowel). It’s a harsh reminder: the price of freedom is high, but worth it (besides, have you ever had a cupcake in the U.K.? Awful.)

So happy Independence Day, my fellow Americans. We might not have four o’clock tea and cake, but we have a whole heaping of kick ass. 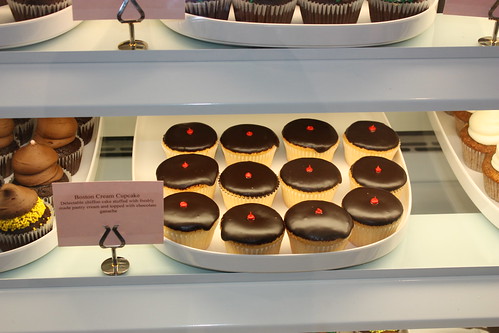