Today’s guest post is by my dear friend Dan Thies, and I consider the fact that it finally came to fruition a huge accomplishment … for ME. Because it has taken me literally months (perhaps years) to persuade Dan to guest post on my blog. But his reply was always the same:

Yeah, I know. He makes a compelling argument, right? So I continued badgering him (giraffing him?) until he finally agreed. And now that I’ve seen what he can create – a post littered with puns, corny jokes, and photos of monkeys – I know that it was TOTALLY worth the wait.

Now if he’d only update his own blog, too.

When embarking on your very first guided African safari, be prepared to answer this seemingly fair and simple question: What animal are you most hoping to see on today’s outing? If asked, please know that your safari guide is not conducting an opinion survey; that this question is not to be answered subjectively. This is a serious, pass/fail quiz, and there is but one correct answer.

On my first safari, in South Africa’s Kruger National Park, I failed this test miserably. Though I clearly heard each person before me shout “lion” to the safari guide’s approving nod, I still got this one embarrassingly wrong. The annoyed sighs and disgusted sneers of a couple dozen Belgian and Dutch tourists said it all. By foolishly blurting “giraffe,” I might as well have been announcing that I hated both waffles and windmills. Our guide shot me a glare that seemed to say, “That’s enough outta you, wise guy.”

These good folks were there for some big, ferocious-feline action. Nobody gives an ess about a few tall, gangly leaf-eaters. My absurd, American crazy-talk was not to be tolerated on this excursion to Lion Town. 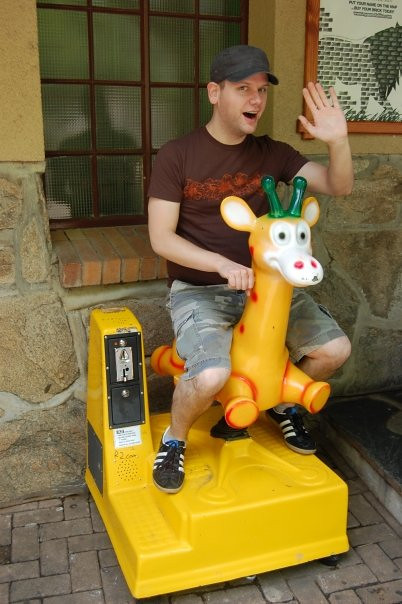 It’s not that I don’t care for huge, killer cats. My lame interest in non-lions aside, I actually think they’re pretty badass. But I also try not to be so single-minded in my pursuits.

Plus, I had already seen a lion earlier that day. While out exploring the park on our own, my friends and I spotted this sleepy gent: 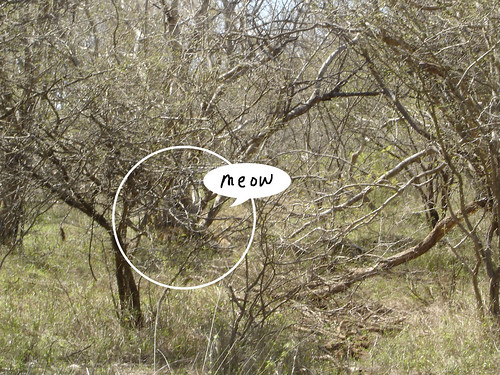 Can you see me?

Given that he wasn’t doing much, and was barely visible in the thick, shady brush, the encounter proved only mildly exhilarating.

But anyway, having shrugged off the shame of my apparent “giraffe” gaffe, I was totally stoked for our three-hour safari adventure to begin.

Kruger National Park is home to sizeable populations of exotic wildlife we Americans might recognize as sports mascots (go, Zebras!) and symbols of certain political parties (vote Hippo!). Its differences from the familiar urban habitats we call zoos are subtle, but many. For one, the resident animals can roam the park freely, while humans are confined to packed safari trucks and fenced-in rest camps. Also, the animals are quite adept at feeding themselves (so stay alert, and sign this legal waiver).

And the park is as big as New Jersey, making quality photo ops with its fifteen hundred well-scattered, mostly nocturnal lions something of a hard-won prize (see above).

Luckily, there’s plenty of non-lion awesomeness to take in at Kruger. Did I mention that the very first animal our group spotted, the moment we pulled out of the gate, was, wait for it… A GIRAFFE! 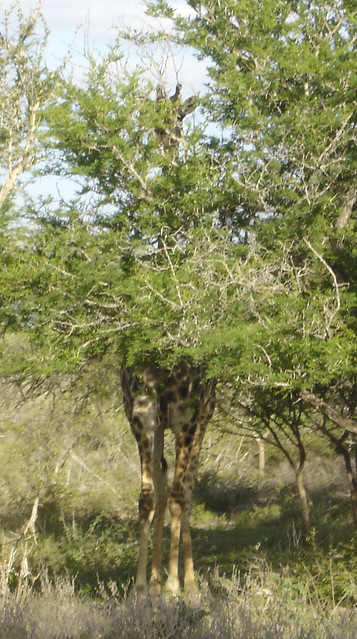 Also, you get to learn neat, little-known animal facts. Did you know that warthogs have no necks, and have to kneel on their front legs to reach the ground for food? 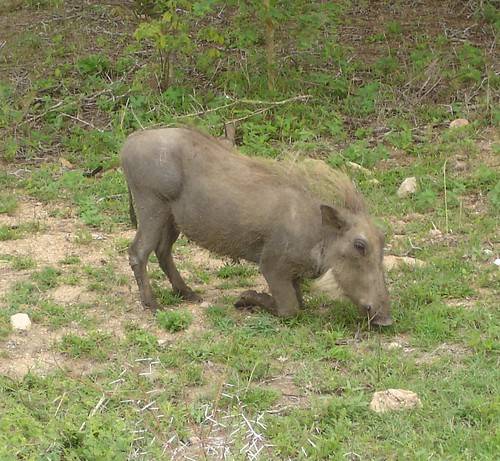 Or that a few dung beetles can reduce a fresh monkey turd to a mere pavement stain in just minutes?

Yes, there were monkeys everywhere. They could be seen frolicking and foraging (and doing other things) all over the park – even right outside our cottage: 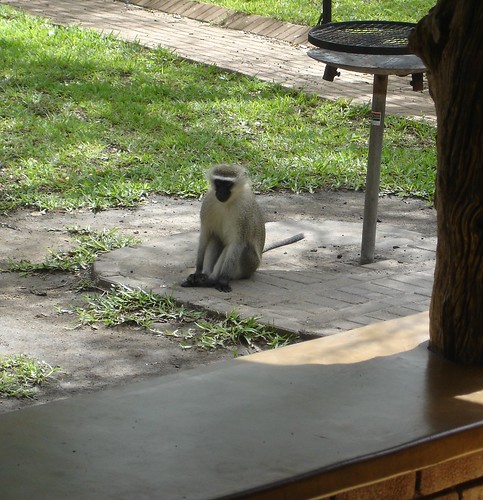 But as cuddly and playful as these critters may have looked, restricting any direct contact with humans is something park officials are deadly serious about: 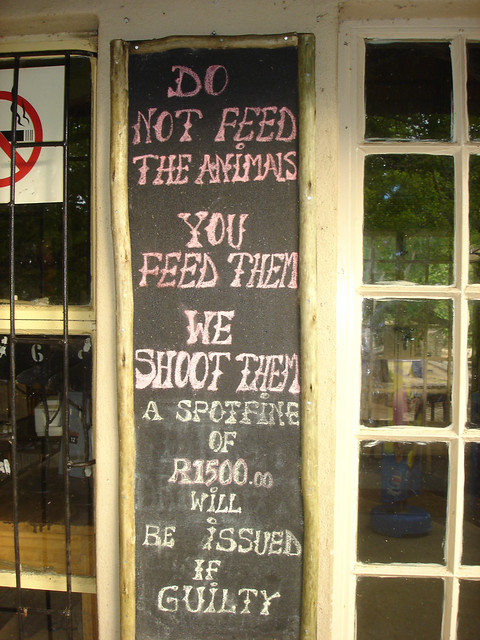 Oh, and speaking of hilarious primates: 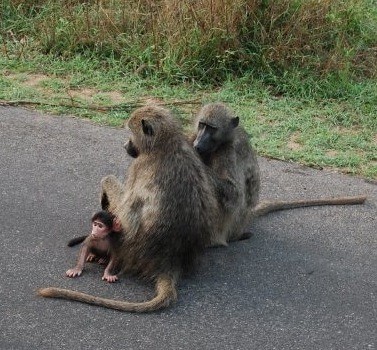 At one point, we saw a whole troop of these guys sprawled lazily across a quiet stretch of road. Looking rather docile, they could just barely be bothered to make way for our slowly passing safari truck. But then, a large alpha-baboon came charging down the road. He was barking what we guessed were baboon orders for, “Move your puffy, red asses! There’s a predator nearby!” The male sentinels quickly lined each side of the road, rigidly poised at full attention, while the now-alert females gathered around to shield the young. In an instant, these suddenly intimidating baboons were prepared to take on any threat. This was some serious monkey business. 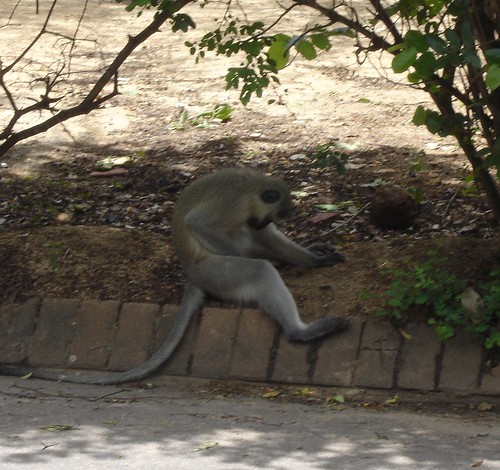 And so was this.

But our biggest thrill/scare in the park involved a near miss with a perturbed elephant. While watching with nervous awe as this very large bull knocked down a whole tree… 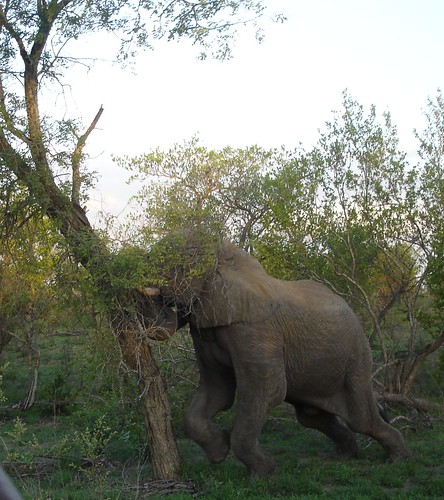 …our guide assured us that such a show of force was not aggressive behavior. This hungry fella was only trying to get at the tree’s sweet top leaves. There was no need to worry without these more telltale signs of aggression: Shuffling feet. (Wait, he’s totally shuffling his feet). Flaring ears. (Um, flappin’ like Dumbo over here). And wild, threatening trunk gestures (Oh. Shit.)

In a sudden, terrifying moment, the elephant charged. He came at the rear corner of the open-air truck – right where my boyfriend Mike and I sat particularly exposed (to the elephant, pervs). In a minor panic, Mike yelled, “GO! GO! GO!” to the driver, who then revved the truck’s loud diesel engine. The noise seemed to startle the elephant, and he backed off as the truck peeled away. 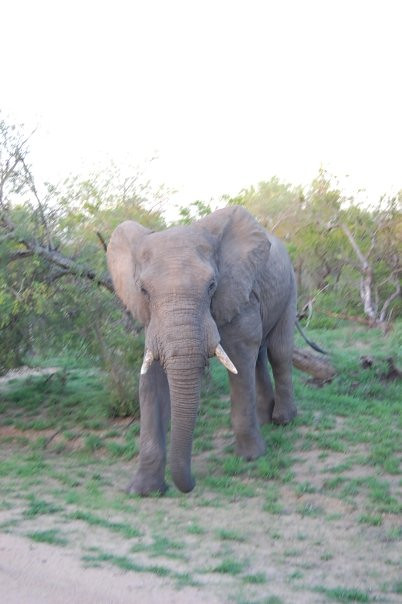 Back off mah tree!

Once at a safe distance, a Belgian woman turned around to tease Mike, telling him, “Don’t be such a baby.” Because, you know, there’s really nothing to fear about a pissed off, five-ton pachyderm. Especially when you’ve got a couple of nice human buffers to shield you. (Earlier, the same woman had apologized for accidentally spraying a toxic plume of insect repellent into the faces of a Dutch couple, saying, “You know us Belgians. We are always trying to kill the Dutch.” She was a class act.)

Our equally tactful safari guide figured this was a perfect time to describe the gruesome manner in which angry elephants dispatch their victims. It seems that some elephants, not satisfied with a quick, crushing stomp, prefer a more “trunks-on” approach: “Oh yes, he will wrap his trunk around your neck, and remove your head from your body.” Real nice, safari guide. 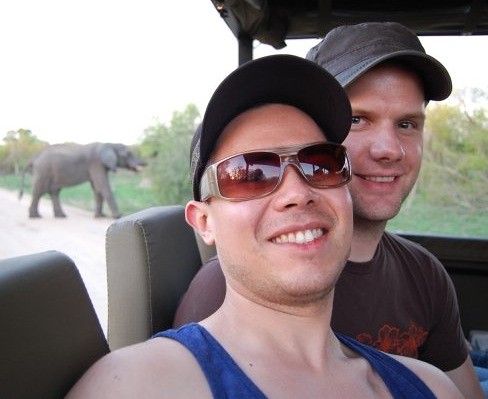 We didn’t spot any lions that evening, but the big payoff did finally come early the next morning. We piled into another safari truck, this time with a very jolly group of older Germans. What began as three hours of bird watching (apparently, Germans are nuts for exotic birds) culminated when we were directed to a site where some lions had just been spotted. After making our way up a long, narrow dirt road, we finally found the site (and the other truckloads of gawkers) where these cool cats sat completely oblivious to the excitement they had generated. There they were, just chillin’ on the rocks, like it was no big: 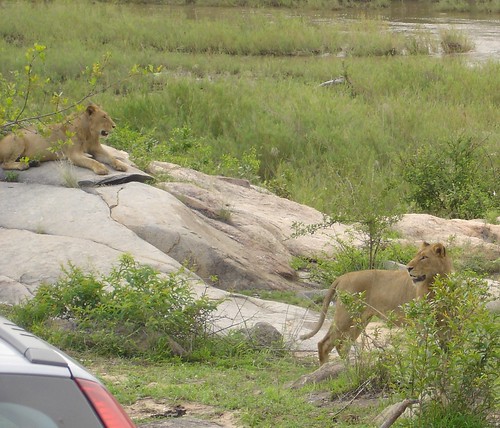 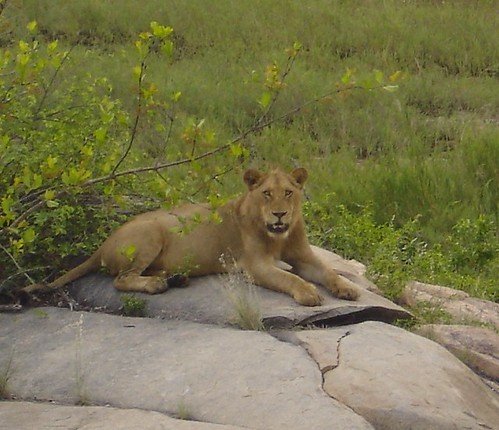 What? We were here the whole time. Where have YOU been?