Rand’s birthday was the Sunday before last, and it passed in our home with nary a cupcake to celebrate. It came, it went, and there was not a crumb of cake, not a spoonful of frosting, no cluster of friends crooning “Happy Birthday” off-key. I consider this an unforgivable oversight on my part. We tried to do something for him during the work day on Friday, but Rand was so swamped, he could only step out of his office for a few moments before he had to retreat back into it. He was literally too busy to attend his own birthday party.

I, for one, cannot think of anything sadder.

Except, perhaps, when one considers the events of Rand’s actual birthday, which was nothing short of an unmitigated disaster. I won’t go into the details. Why? Because they make me look awful. Like, more awful that this occasionally-too-honest blog already makes me look. If I post the tale of Rand’s birthday in detail, I’m sure that when some gorgeous young thing swoops in and steals my husband, no one will blame him (“Remember what his first wife did on his 32nd birthday? NOTHING. She had this coming.”) and, DAMN IT, I WILL WANT SYMPATHY ON THAT DAY. So I’ll simply say that for Rand’s birthday, instead of dinner (cooked on his brand-new grill) in the company of good friends, followed by glorious cake, he was treated to an injured wife, icing her back on the bed while sniffling, along with a rather severe guilt-trip.

And did I mention there was no cake?

Then, just like that, his birthday was over. Rand swears he isn’t upset, but that’s just more evidence of why he’s wonderful. Because even when his birthday is a total flop, he claims it wasn’t. That he doesn’t mind. In fact, he seems to think that being a year older, in and of itself, is satisfying enough and no further celebration is necessary. This may be because, as the years pass, Rand is slowly turning into his grandfather, Seymour. Check out this photo of Rand I took a few weeks ago when we were visiting his grandparents in Jersey: 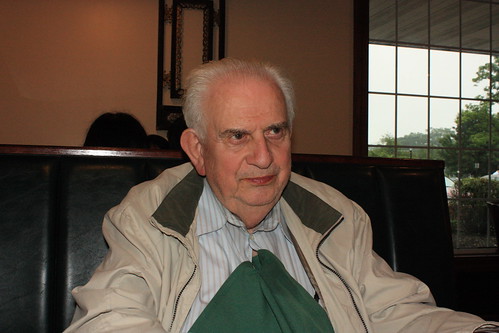 He looks pretty good for 32, actually.

Amazing, right? The resemblance is uncanny.

Hmm … Rand has just informed me that the photo above actually is of his grandfather. How he can tell, I have no idea. But here’s a photo of the two of them, which, to me at least, just looks like a picture of Rand, twice. 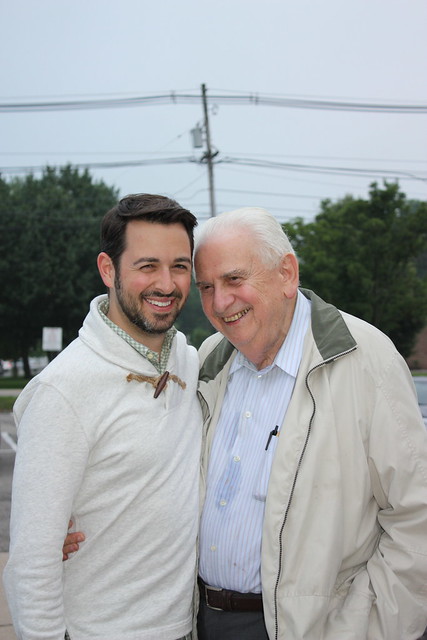 How this makes the brittle lump of coal that is my heart glow.

And then there’s this photo, in which … well, I don’t actually know what’s going on here. I told Rand’s grandfather to hide the stain on his shirt (a souvenir from that evening’s dinner) behind Rand and this happened: 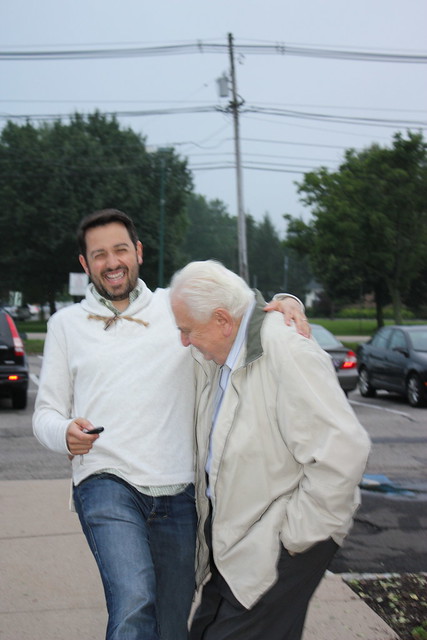 He basically tried to burrow his face into Rand's underarm.

For the record, I am pretty okay with the idea of Rand slowly turning into Seymour. Not that there would be anything I could do about it if I wanted to. I mean, the transformation is practically complete: 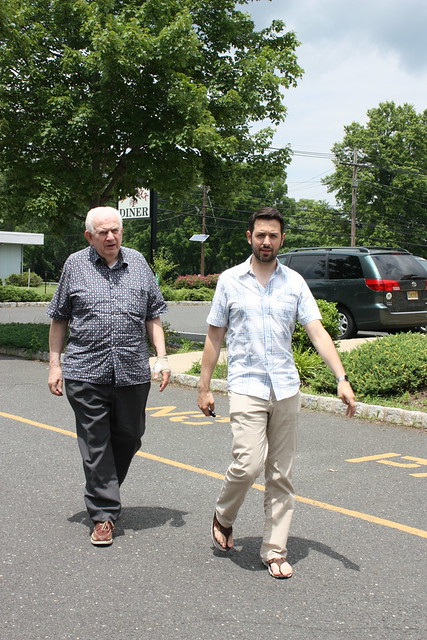 I can only assume my husband will start picking up all the rest of Seymour’s habits, too. Maybe he’ll start calling me by the pet-name his grandfather picked out for me years ago (“Jennifer”). Or Rand might start shaking his head while simultaneously saying “yes” or nodding while he replies “no,” a feat that is harder than it looks, but one which Seymour has mastered quite well. Or perhaps he’ll start tugging on the back of my jacket at random times, and when I turn around, he’ll feign total innocence and say, “Hello, dear. Is there something I can do for you?”

No. Not a single problem do I have with this.

But I do have a problem with Rand’s birthday passing quietly and without too much notice in our home. So I’ve decided a party is coming. He may anticipate it. He may not (eh, he probably will. I mean, I just blogged about it). But, damn it, we will have a celebration for him. Because Rand may not think that his birthday is all that big a deal. He may not want us to make a fuss over him. But him slowly becoming this guy – 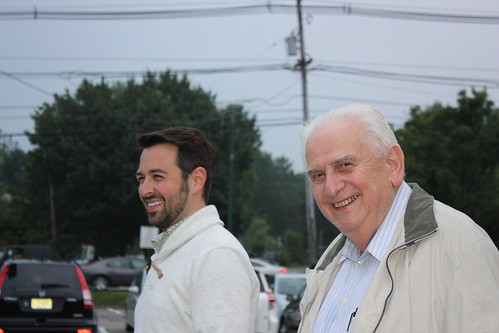 Well, I think even he’d agree that’s something worth celebrating.