Before I launch full-force into my coverage of Boston (the city, not the band), I feel like I should mention the events of this past Sunday, which I bore witness to, and which made it to the local news here in Seattle.

Now, keep in mind, despite being a fairly notable city, Seattle isn’t exactly an exciting news town. Other things that have made it to the local news include: “Bald eagle saved by mouth-to-beak CPR” and “Washington woman in court for trying to sell baby to Taco Bell.” So the bar for a story being newsworthy is set kind of excruciating low in our neck of the woods, but since it happened right in front of us, and wigged me out substantially, I figured I’d talk about it.
Rand and I recently moved to Capitol Hill, a rather hip and exciting neighborhood of Seattle, which is home to a large LGBT community and a thriving counterculture, and lots of students and young people. Rand and I frequently make cracks that we’re not cool enough to live here, and how we’re really going to need to take up midnight bicycle polo or contact juggling if we want to renew our lease. Or at the very least, one of us is going to have to get a tribal tattoo.

I vote him, just for the record (it would be delightfully anachronistic. Like a duck wearing pants).

There’s also a large number of homeless folks in our neighborhood, and a few kids who clearly have had a rough go of it in the brief time that they’ve been on the earth. And while our home is generally quiet, Friday and Saturday nights on the The Hill are a bit noisier and crazier than most other places that we’ve lived. None of this particularly bothers me all that much. We’re kind of the Benjamin Buttons of domiciles: we started out living in cute, family-friendly neighborhoods, and as we got older moved to party-central. By the time we’re in our forties, we’ll have taken up residence in the middle of a rave (do kids still go to raves? Anyway, you get my point).

Rand and I were walking down Broadway the other day, one of the main drags in Capitol Hill, where a good deal of construction is going on to put in a new light-rail station. There are huge wooden walls put up along Broadway’s east side, to block out the construction, and (with the city’s permission) a number of banners and art installations have gone up.

This was one of them: 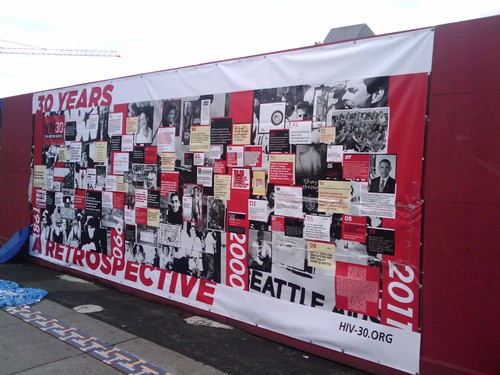 It’s a timeline commemorating thirty years of HIV/AIDS awareness sponsored by HIV30. When we passed it last weekend, we noticed a young man (late teens/early twenties), methodically cutting at the side of the poster in a effort to take it down. Since a lot of the signs and banners rotate out in this area, I didn’t see anything out-of-sorts. Plus, he was fairly calm about the whole thing.

“That guy’s supposed to be doing that, right?” I asked Rand.

My husband surveyed the situation. The kid had a box-cutter (we figured people don’t just run around with those) and a large bag in which to place the banner.

So we continued on our walk, and moments later heard some commotion back from whence we came. A young woman had confronted the kid, who evidently was not suppose to be taking down the banner. She stood between him and the wall. He subsequently went ballistic, screaming, “YOU DON’T UNDERSTAND!” and frantically started tearing at the banner behind her, while she stood her ground.

Oh, and did I mention HE HAD A BOX CUTTER?

There were a few people nearby (including the girl’s boyfriend), so when Rand tried to go, I grabbed his arm.

“Baby, no,” I pleaded. As soon as there is an emergency, Rand always jumps in. Noble? Sure. But it freaks me out. Can’t he just call 911 at a reasonable distance from the commotion like a normal person? The kid was completely hysterical, and the woman who confronted him wasn’t alone. Her boyfriend was with her, and there were people around. “It’s fine,” I said, unconvincingly. “There are other people …”

And that’s when I learned several things. First, that I am a huge coward. I will stare blankly at a situation and even when I think, “Something should be done”, I expect someone else to step in. This was a rather upsetting revelation. I had sort of figured that I’d be the type to speak up. Disappointingly, I am not. At least, not when Rand is involved. I’d like to put him in some sort of giant plastic bubble, ensuring that not even bacteria can get to him.

Sigh. I’ve said in the past this blog makes me look terrible. It does. But at least it’s honest.

Secondly, I learned that my husband doesn’t have any of my faults. People generally run from burning buildings. Rand runs towards them. (In all fairness, I knew this already. It keeps me up at night, to be honest – I can imagine him being part of a tragic good Samaritan story. The kind that ends up on local news.)

I kept trying to hold him back, but he said to me, in that tone of voice that I rarely hear, the one reserved for only the most serious of situations, “Geraldine, you have to let me go help.”

And I let go of his shirt. And he ran towards the scene. And then I ran after him. There was more yelling. My husband was in the middle of it, now, too. Within seconds, the police had been called, and the kid, now woefully outnumbered,  ran off.

I stood in a semi-daze, when I finally noticed the girl who had put herself between the guy and the banner. I asked her if she was okay.

And I wondered how on earth she knew that.

Soon after (literally a matter of minutes) people arrived with tape, and began patching up the sign. A couple who had passed moments before, and seen it pristine, were visibly crushed that it had been damaged so quickly. 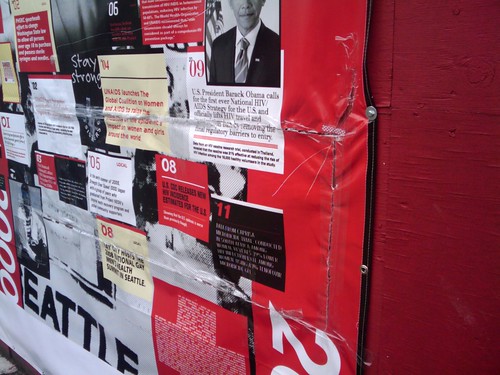 Part of where the banner was cut, now patched up with tape.

After everything had calmed down, everyone parted ways and walked on (the police were called, but never arrived). Later, I apologized to Rand for trying to stop him.

“I was just so freaked out,” I said, clutching his arm. “He could have had a knife.”

Right. Like I said, my husband is a lot braver than I am. It’s just one of the reasons I love him. So I hope you’ll forgive me for trying to keep him safe.

(Later in the day, I walked by the sign and started chatting with the guy who runs the Capitol Hill Seattle blog about what happened.)