I’d like to think that I’m pretty up-to-speed on important, world-changing events. I read reddit daily. I’m following the situation in Libya. I heard about the passing of Jack Layton, leader of Canada’s Official Opposition party (though in all honesty, up until this week I had no idea who he was). I’m even somewhat aware that one of the Kardashians got hitched recently, proving that even vapid people are deserving of love.

So naturally, you can imagine I might have been slightly beside myself when I saw this a few months back: 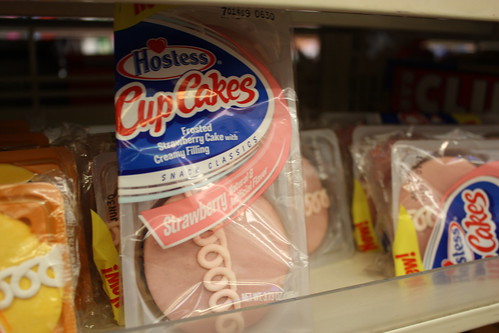 I have no idea why I was not informed. Does Hostess REALLY not have me on their press mailing list? It seems that they ought to. Because even though the strawberry variant of the Hostess cupcake has been around since January 2011, I did not see them until June.

I was at gas station in northwestern Washington state, not far from the Canadian border, and there they were, innocently sitting on the shelf. Next to them was something I have seen before, if only rarely: the elusive orange-flavored Hostess cupcake. 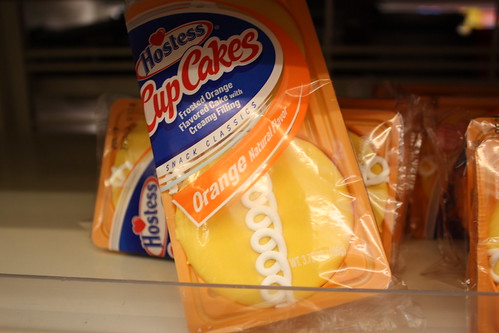 In college, I had a friend who disputed the existence of orange Hostess cupcakes, even after I swore, hands down, that they were real. She questioned my knowledge on the topic of cupcakes, which is just ridiculous – it’s like debating Einstein over physics. THERE ARE SOME THINGS THAT CERTAIN PEOPLE ARE PUT ON THE EARTH TO UNDERSTAND. Do not question them. Ever.

Seeing an orange Hostess cupcake is rare enough. Seeing it alongside the previously-unheard-of-at-least-to-me strawberry Hostess cupcake is like discovering that Jeff Golblum made a movie with Cyndi Lauper (awesome, but a little shocking and disorienting).

I made sure to snap a few pictures, but then I did something I rather regret: I did not buy either of these confections.

I know. I know. I’m not really sure what I was thinking. I was just so overwhelmed by what I had seen (plus, all my cash was in Canadian currency).

Also, let’s be fair: Hostess cupcakes are kind of terrible. That’s not to say I won’t eat them (I remember once when I was little my mother let me take a chocolate Hostess cupcake in my school lunch. I have not forgotten it. It was one of the better days of my life.) It’s simply that I’ve found much much better iterations as I’ve traveled the globe.

You know, for science.