I know, I know – you think I’d have gotten it out of my system after the thousand odd words I dedicated to it last week, right? But you’d also probably presume that at some point, I’d also have gotten tired of eating all these sweets, much less writing about them.

And yet, I haven’t. My passions clearly die hard. 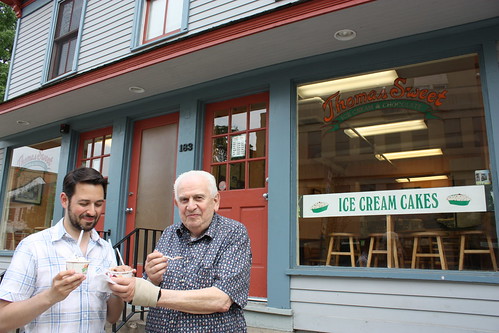 I don't remember what was going on here, but I suspect it was adorable.

Consequently, I must ask you to forgive me if your tolerance for desserts – and for reading about them – is not as high as mine. And I must ask you to not mind that I am about to jump around in time a bit to tell you about Thomas Sweet – a small chain of ice cream shops with several locations in Jersey. It may seem odd that I seemed to go almost immediately from San Francisco to Princeton, but in reality, we did just that. I think a day or two separated these trips, and they’ve been whirred together in my mind, not unlike the Blend-in, the signature dessert at Thomas Sweet. But I’m getting ahead of myself.

We popped into their Nassau Street location in Princeton, as we happened to be visiting family in the area, and apparently I needed one more reason to be sad that I didn’t attend an ivy league school (Harvard has Sweet Cupcakes. Princeton has Thomas Sweet. To be fair, though, the University of Washington had Rand and a full-scholarship waiting for me. I shouldn’t knock it).

Thomas Sweet is not swank. The staff is a gaggle of young people who don’t look old enough to legally work without a note from their parents. It’s surprisingly unpretentious – the flavors are candy-laced confections that a kid with too much time and too little adult supervision might come up with. And that’s fine with me, because children are GENIUSES when it comes to sugar (Huh. Maybe that’s why the folks serving ice cream at Thomas Sweet are so ridiculously young-looking).

I got something called “Jersey Shore.” Contrary to the name, it did not taste of body oil and hair gel, with candy-coated steroids sprinkled throughout. Instead, it was salted caramel ice cream with chocolate pieces and a caramel ribbon. It stuck to both my ribs and my fillings. 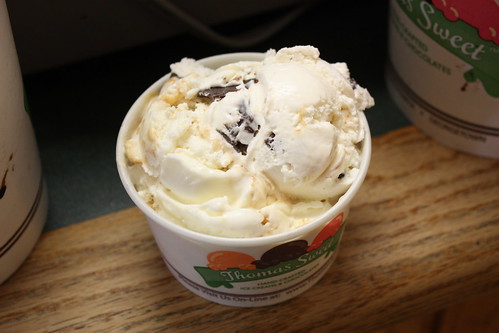 My cavities hurt just thinking about it.

Rand got a Blend-in – smooth ice cream blended with a topping. It’s not unlike a Blizzard, though apparently Thomas Sweet was serving their iteration of the treat years before Dairy Queen. Plus, the device that Thomas Sweet uses to create their Blend-ins is far more impressive that anything I’ve seen at DQ. It looks like an enormous drill. 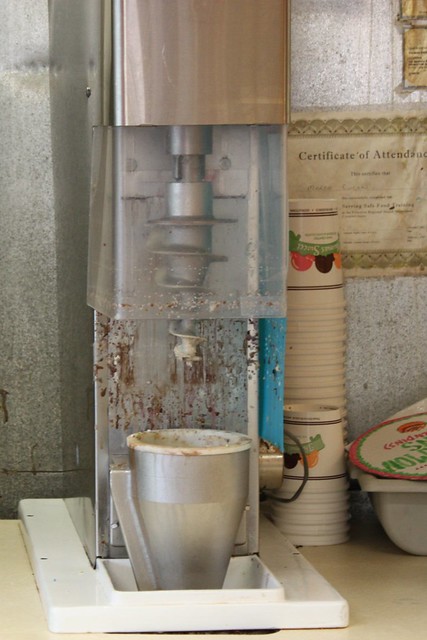 The splattered ice cream kind of looks like carnage. 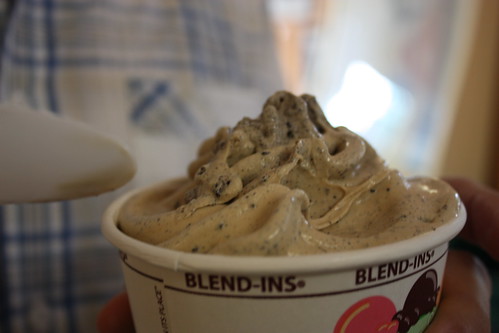 The blending resulted in a very Blizzard-like texture.

It wasn’t anything particularly special – it’s decent (if incredibly sweet) ice cream. Apparently there are better options in Princeton like Halo Pub and The Bent Spoon (I’ve yet to try either, but let’s face it – I probably will, and likely on the same day), but I suspect I’ll go back to Thomas Sweet. Why? Because, according to a yellowed newspaper clipping on the wall, Bruce Springsteen can occasionally be seen there.

YEAH. This is the ice cream that The Boss eats. DO YOU NEED ANOTHER REASON? (Answer: NO).

Imagine his ruggedly handsome brow furrowing as he stares at his scoop, quickly melting on the ground in front of him. It’s heart-breaking, really. I can picture it clearly: being the considerate gentleman that he OBVIOUSLY is, he’d bend over and start cleaning it up …

And I have officially lost my train of thought by thinking about Bruce Springsteen bending over. 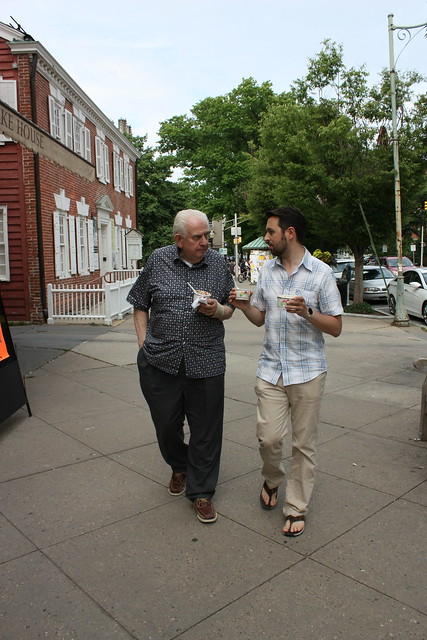 Rand: "So as revenge for her always prattling on about Springsteen's butt, I'm going to eat her ice cream."

So … yeah. Ice cream. Summer. Something something tight jeans.

Hmm. Maybe it’s not ice cream that I haven’t gotten out of my system. Maybe, once again, it’s Jersey boys.