Life is not convenient.

You are most likely not shocked by this revelation, right? I mean, you probably suspected that life wasn’t meant to be convenient from a very early age. Like when you were curled up in bed during winter break, all snug and cozy, and you realize that you desperately have to pee.

Or when you created a truly awesome fort from the pillows on the couch, and you managed to hole yourself up inside with, say, a flashlight and a book or two, and the set-up is ABSOLUTELY DYNAMITE, but you can’t exit the fort without destroying it. And at that moment, you realize you desperately have to pee.

Of course, there are more examples of life not being convenient that don’t involve having to pee, but guess what?

Yeah. I’ll be right back. (Runs off to the bathroom).

Okay, where was I? Right. I was complaining about the inconvenience of life. Or, not really complaining, really, but simply stating a fact. Life, even when it is really good, is by no means simple. And when it’s bad … oy.

So it’s pretty safe to say that when your life starts to be characterized by travel, it necessarily means that travel becomes rather inconvenient, too. I don’t mean to sound ungrateful. I realize that no sympathy can be garnered from going down this path. That no one wants to read a blog full of statements like, “Poor me! I have to travel the world with my husband and spend my days exploring museums, shopping, and eating cake. It is so dreadfully bothersome.”

Ugh. No. That is not what I am saying at all (and if I ever do come close to making a comment like that, please, slap me. You have a freestanding invitation to come to my house and give me an open-handed whack across the cheek. All I ask is that you give me some context for why I had it coming, and perhaps later we can discuss the whole thing over cupcakes.) It is simply that I don’t always enjoy being on the road. They are times when I find myself far away from home, waiting patiently for bad news (or good news. Or any news at all, really).

We’ve had a few moments like that this summer. Please forgive my vagueness – most of my friends and family are not as willing to reveal all the intimate details of their life on the internet as I am – and let’s just say it’s been peppered by some not-so-great news. We’ve had friends and loved ones falling off curbs and clonking their heads. Or tumbling down the stairs (seriously, Deanna, I nearly had a heart-attack. You are officially not allowed to go anywhere without wearing a body-suit of protective padding). Or having to evacuate their offices due to rioting. Or hurricanes.

Some of this news has happened while we were on the road, and could do absolutely nothing to help. And some of it happened while we were at home, and could do absolutely nothing to help. It’s been incredibly frustrating. I’ve spent much of the time worrying, and I have little to show for it. I did learn a few things, which aren’t necessarily worth sharing, but since that’s never stopped me before, here they are:

The Stanford Shopping Center in Palo Alto is a great place to kill time while you are waiting for potentially terrible news. If you sit outside at the cafe near Nordstrom’s, no one will bother you as you suck down a drink and stare blankly at your phone, waiting for it to ring. 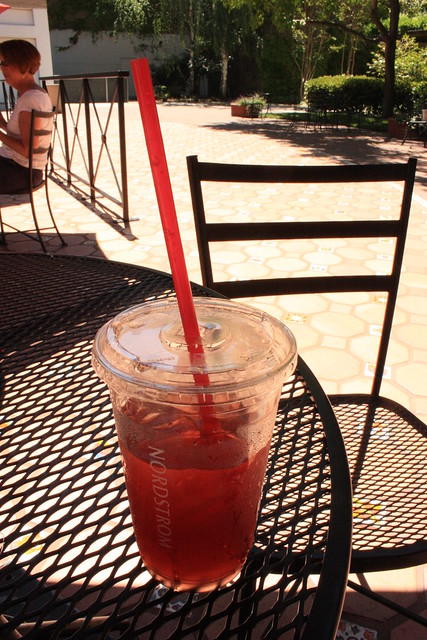 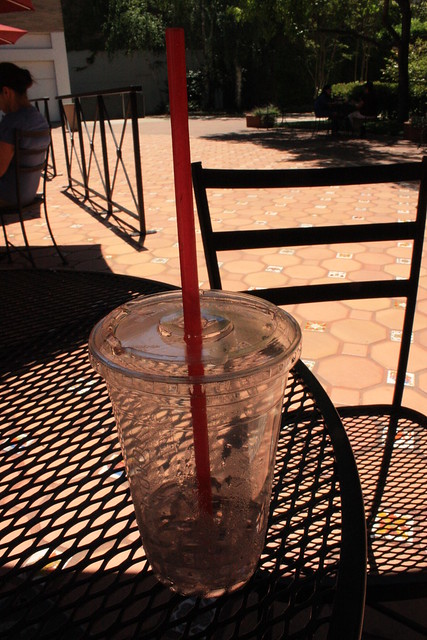 I happened to put my cup back in the exact same spot. This was unintentional.

Searching for an average place to eat in rural New Jersey? May I suggest the inexplicably-named L.A. cafe at the Hunterdon County Medical Center?  Sure, the food is only mediocre, especially when you have more than one consecutive meal there … 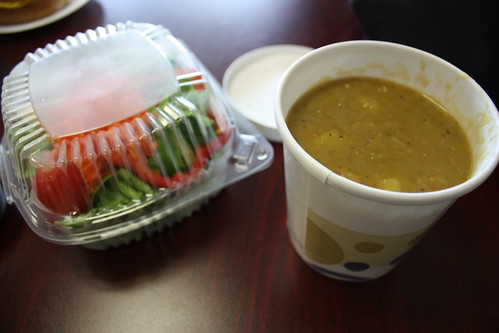 Rand did not care for my soup. I declared it middling, and ate all of it.

But the murals on the wall are perversely delightful! You wouldn’t think the theme of food and medicine could be brought together with such hilarious harmony, but it can. 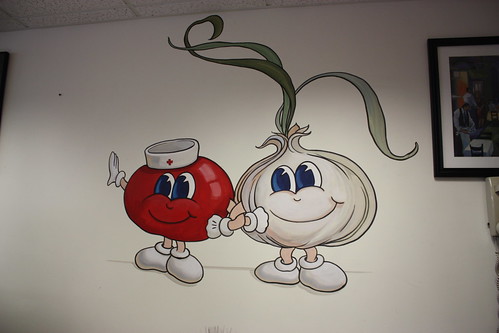 I questioned the anthropomorphic tomato's medical credentials. Seriously - how well could it possibly know the human body, when it doesn't even have one?

The fish was my favorite, even if it was an enigma in and of itself. Where in god’s name does a fish get a stethoscope, anyway? 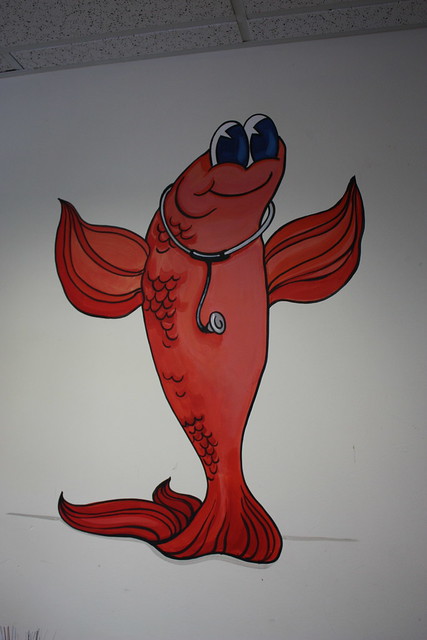 Of course, it did give me a much-needed laugh (in a hospital, no less), which I suspect might have been the artist’s intention.

I also discovered that while the Shakespeare Theater of New Jersey (at Drew University) is just as fabulous as ever, the performances are far less enjoyable when you are sitting next to an empty seat. Particularly when the seat belonged to someone who was supposed to be joining you, but could not.
– 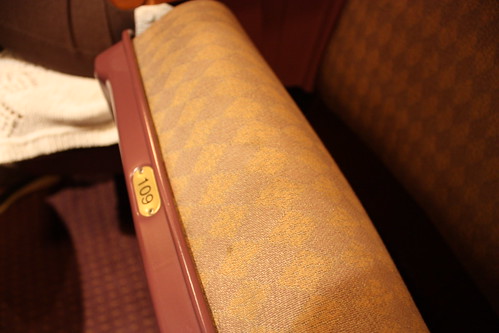 I had to complain about the volume of the performance/the temperature of the theater to Rand, because there was no one else who would listen to me.

None of this information is particularly useful, is it? It’s why I’ve hesitated writing about a lot of things that have happened this summer (indeed, most of the posts you’ll see are from trips that happened in March or April or June. I’ve been steering clear of the last few months). The places I’ve seen, the things I’ve noticed, are hardly good travel writing material. But I wanted to mention the last few months. To acknowledge that they happened, and that they’re now passed (and during that time, we even found a few things to laugh about along the way). Rather miraculously, things have turned out really well. Perhaps not everything went how we would have liked (Rand can certainly attest to that), but things are getting better. Bruises are healing. Hair is growing back. Deanna has promised to wear a protective helmet (right, babe?). The rains have died down, and the sky is clearing.

If you had told me that things were going to end up this rosy by August, I sincerely wouldn’t have believed you. It hasn’t been an ideal summer. And certainly not a convenient one. But, hey, that’s travel. And that’s life.